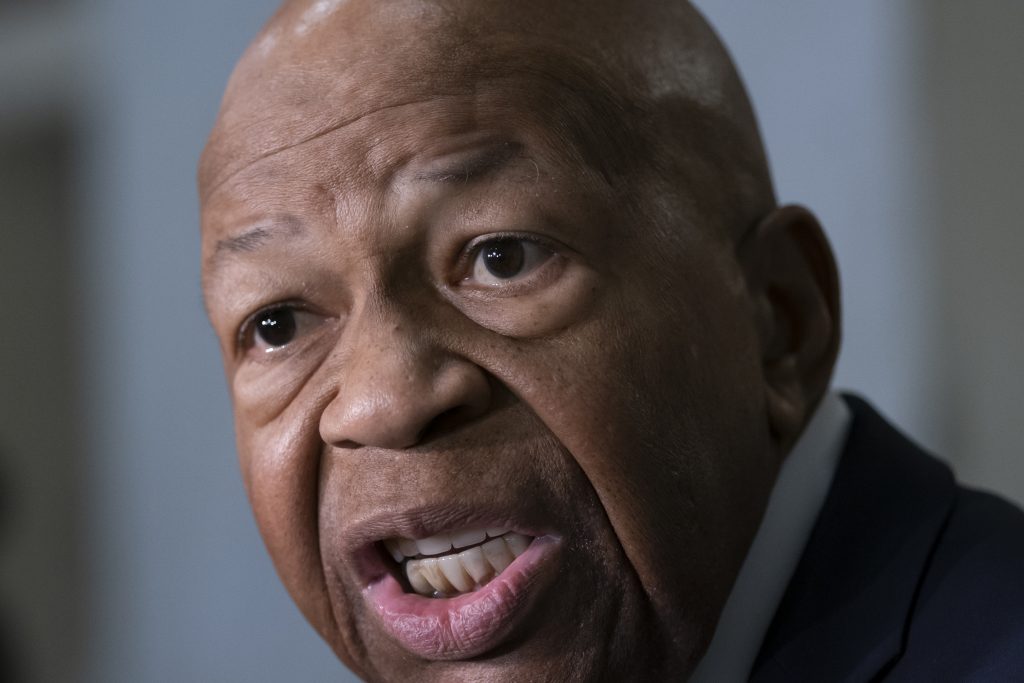 Facing growing accusations of racism for his tweets, President Donald Trump lashed out at his critics on Monday and sought to deflect the criticism by labeling a leading black congressman as himself racist.

In the latest rhetorical shot at lawmakers of color, Trump said his weekend comments referring to Rep. Elijah Cummings’ majority-black Baltimore district as a “disgusting, rat and rodent infested mess” where “no human being would want to live” were not racist. Instead, Trump argued, “if racist Elijah Cummings would focus more of his energy on helping the good people of his district, and Baltimore itself, perhaps progress could be made in fixing the mess.”

“His radical ‘oversight’ is a joke!” Trump tweeted on Sunday.

After a weekend of attacks on Cummings, the son of former sharecroppers who rose to become the powerful chairman of the House Oversight and Reform Committee, Trump expanded his attacks on Monday to include a prominent Cummings defender, the Rev. Al Sharpton, who held a press conference in Baltimore to condemn the president.

“Al is a con man, a troublemaker, always looking for a score,” Trump tweeted ahead of the press conference, adding that Sharpton “Hates Whites & Cops!”

Sharpton fired back at the president in a tweet of his own, saying, “I do make trouble for bigots.”

Meanwhile, Trump convened a group of “wonderful Inner City Pastors” for an unannounced closed-door meeting to discuss the issues facing the black community on Monday.

“This country needs healing. There’s so much division in America along racial lines,” said Bill Owens, president of the Coalition of African American Pastors, who said he was among about 20 pastors who had met with the president.

“He wanted to know from us: What should he do in America? What best can he do?” Owens said of Trump, insisting the gathering “was not damage control.”

Asked by a reporter whether he thought Trump was racist, Owens said he found that “hard to believe,” but said the president could do more to address racism in the country, “absolutely.”

“These are his brothers,” King said.

“I assume that Bernie must now be labeled a Racist, just as a Republican would if he used that term and standard,” Trump tweeted.

Sanders tweeted back that “Trump’s lies and racism never end. While I have been fighting to lift the people of Baltimore and elsewhere out of poverty with good paying jobs, housing and health care, he has been attacking workers and the poor.”

Maryland Gov. Larry Hogan, a Republican, on Monday called the president’s comments “just outrageous and inappropriate.” Hogan, the new chairman of the National Governors Association, said he recently gave an address at the NGA about the angry and divisive politics that “are literally tearing America apart.”

“I think enough is enough,” Hogan said on the C4 Radio Show in Baltimore. “I mean, people are just completely fed up with this kind of nonsense, and why are we not focused on solving the problems and getting to work instead of who’s tweeting what, and who’s calling who what kind of names. I mean, it’s just absurd.”

Michael Steele, an African-American who served as the state’s former lieutenant governor and then as the national chairman of the Republican National Committee, said it was “reprehensible to talk about the city the way” Trump did, but he hoped the attention would elevate the conversation about how to help urban areas, and he invited the president to be a part of the conversation.

“Put down the cellphone and the tweeting and come walk the streets in this community so that you can see firsthand the good and the difficult that needs to be addressed, and let’s do it together,” Steele told the radio show.

Speaking in media interviews on Sunday, acting chief of staff Mick Mulvaney said Trump was reacting in frustration to the Democrats’ unrelenting investigations and talk of impeachment. He said Trump swung hard at Cummings and his Baltimore district because he believes such Capitol Hill critics are neglecting serious problems back home in their zeal to unfairly undermine his presidency.

“I understand that everything that Donald Trump says is offensive to some people,” Mulvaney said. But he added: “The president is pushing back against what he sees as wrong. It’s how he’s done it in the past, and he’ll continue to do it in the future.”

Cummings is leading multiple investigations of the president’s governmental dealings. In his direct response to Trump on Twitter, Cummings said: “Mr. President, I go home to my district daily. Each morning, I wake up, and I go and fight for my neighbors. It is my constitutional duty to conduct oversight of the Executive Branch. But it is my moral duty to fight for my constituents.”

Cummings has also drawn the president’s ire for investigations touching on his family members serving in the White House. His committee voted along party lines Thursday to authorize subpoenas for personal emails and texts used for official business by top White House aides.

Earlier this month, Trump drew bipartisan condemnation following his call for Democratic Reps. Ilhan Omar of Minnesota, Alexandria Ocasio-Cortez of New York, Ayanna Pressley of Massachusetts and Rashida Tlaib of Michigan to get out of the U.S. “right now.” He said that if the lawmakers “hate our country,” they can go back to their “broken and crime-infested” countries.

All four lawmakers of color are American citizens. Three of the four were born in the U.S.