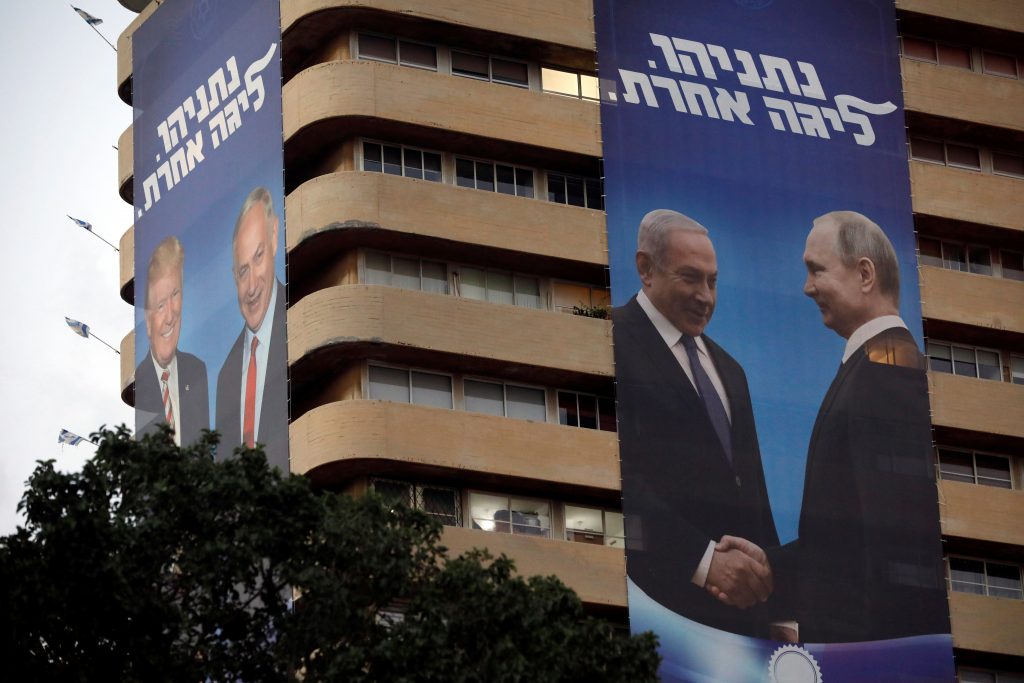 The posters tout Netanyahu’s image as a world-class statesman, towering above his political rivals. “Netanyahu: In another league,” reads the slogan on the posters.

Likud strategists were evidently gratified by the results of almost the same poster with Trump before the elections last April.

Endorsements are familiar features of election campaigns, usually given by a senior politician to someone junior, like a president to a candidate for congress in his own party. But endorsements from foreign leaders are out of bounds, seen as meddling in the internal affairs of another nation.

But in this case, the foreign leaders are not involved in any campaign activity, and have not given Netanyahu an endorsement. They are merely—presumably—assenting to his use of friendly photo-ops from recent visits to help him get reelected.

Of course, not everyone likes the idea. Trump is popular in Israel, Modi is important but hardly known; Putin is more controversial.

A group of Russian speakers planned a demonstration outside the Likud building for Sunday evening to protest the Netanyahu-Putin poster.

“We believe that it is extremely inappropriate for an Israeli PM to use photos of a corrupt autocrat in campaign posters, especially considering yesterday’s brutal crackdown on a peaceful demonstration in Moscow,” a spokesman for the protesters said.

It’s a calculated risk. Russian-speaking voters comprise 12 percent of the Israeli electorate, or approximately 770,000 of the 6.3 million eligible voters in Israel. Netanyahu’s Likud hopes to win over some of them, who form the main constitutency of Avigdor Liberman’s Yisrael Beytenu, the party whose intransigence wrecked the nascent coalition after the April elections.