American Airlines’ Reign As The World’s Largest Airline Is Ending 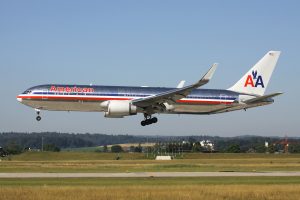 American’s five-year reign as the world’s largest airline is coming to an end.

By two major measures, Fort Worth-based American Airlines fell behind either Delta Air Lines or United Airlines in the rankings of the world’s biggest air carriers during the second quarter.

Atlanta-based Delta brought in about $530 million more in revenue than American did between April and June. And measuring available seat miles, American fell to third behind Chicago-based United and Delta.

American’s step down from the top comes as it announced its second-quarter earnings Thursday, the last of the major carriers to report financial results. It’s also been a tough period for American’s growth with the grounding of its fleet of 24 Boeing 737 Max jets through at least Nov. 2. The company said it expects to take a $400 million hit from the 737 Max problems this year.

American is still the largest carrier by several measures, including employees, fleet size, daily flights and destinations served, but the gap has been closing. American will likely regain some ground once the 737 Max groundings end. But either way, both Delta and United are a lot closer than they once were.

“Our focus is on our strategic objectives and plans for the year and delivering the best experience for our customers and our team members,” said American Airlines spokeswoman Andrea Koos.

American has held the title of world’s largest airline since it merged with U.S. Airways back in 2013, the last in a series of major airline mergers that consolidated the industry down to the mega-players that control most of it today.

“It’s hard to fathom because they were considerably bigger right after the merger,” said Seth Kaplan, an aviation journalist with Kaplan Research. “Now everything has kind of stabilized.”

The merger gave American a slight edge on revenue with Delta Air Lines, which merged in 2008 with Northwest Airlines.

American’s dethroning might be temporary since it has been canceling about 115 flights a day due to the grounding of its Boeing 737 Max fleet until November. The airline has also blamed some delays and cancellations on its mechanics’ union, which it says is stalling work as a new contract is negotiated.

After the 2013 merger, American remained the biggest airline by committing to all of the hubs both companies operated before they came together. Kaplan said that was a move to preserve market share. Delta and United both gave up hubs after their mergers.

That made Delta and United smaller but more nimble, Kaplan said. To compare, while American has about 40% more employees than Delta, it has only 30 more aircraft.

“The real problem is that American might have been bigger, but it’s much less profitable than the other two,” Kaplan said. “American can’t afford to be as patient when routes are performing poorly.”

Another reason that American has fallen behind its competitors is because of where it focuses, Kaplan said. American’s strongest international market is Latin America, where Venezuela is suffering through a political crisis and Brazil’s economy is weak.

But American Airlines leaders do see potential for the company. CEO Doug Parker said he is hopeful the company can get a deal soon with mechanics unions that have been bargaining for a contract since the merger.

“2020 will be a year in which we have our eyes firmly on operations improvement, especially in regard to efficiency,” Casey said Thursday. “There are some larger or longer-term issues in terms of flight management systems and crew-scheduling systems where we’ll have to move past some of the legacy systems and think about next-generation. But there are many improvements that we can make along the way.”