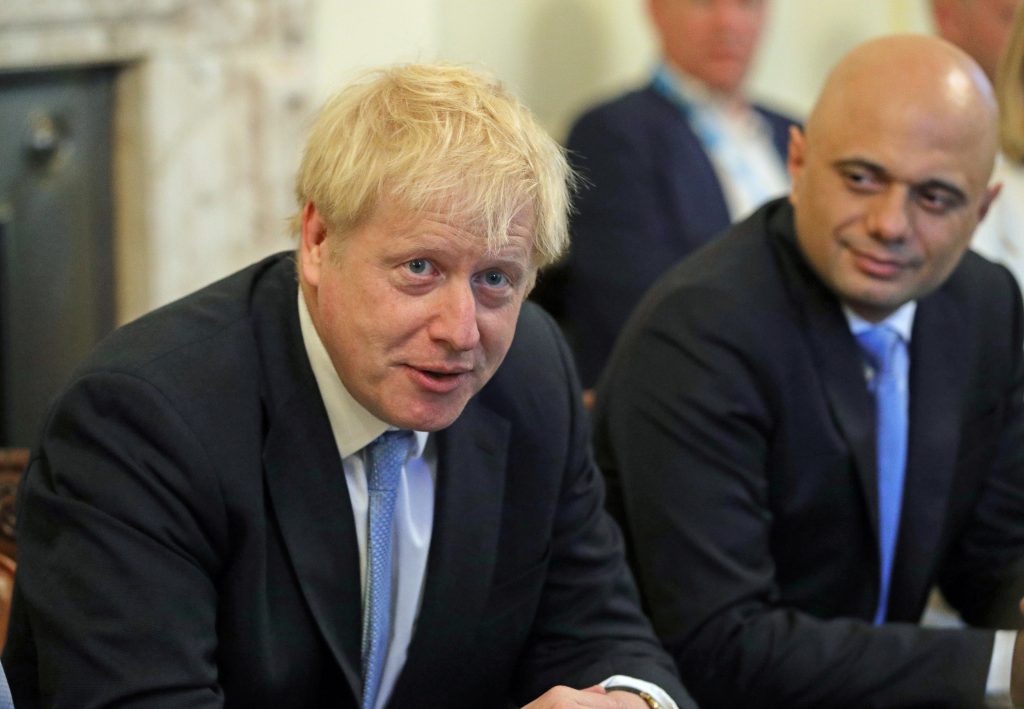 Boris Johnson held his first Cabinet meeting as Britain’s prime minister on Thursday, pledging to break the Brexit impasse that brought down predecessor Theresa May.

Johnson told his just-assembled top team in 10 Downing St. that Britain was at “a pivotal moment in our country’s history.” He repeated his vow that the U.K. would leave the EU “on October 31 or indeed, earlier.”

He will face a rowdier reception later when he addresses the House of Commons for the first time as the country’s leader.

Johnson has less than 100 days to make good on his promise to deliver Brexit by Oct. 31 after what he called “three years of unfounded self-doubt” under May’s government.

In his first speech as prime minister on Wednesday, Johnson offered a plethora of promises, from more police on the streets to ending a ban on genetically modified crops to faster internet access.

But his main task is making good on his vow that the U.K. will leave the EU at the end of October, “come what may.”

To accomplish it, he culled many members of May’s Cabinet within hours of taking office, replacing them with a group of loyal Brexit supporters.

Many of the new ministers worked with Johnson in the 2016 referendum campaign to leave the EU, as did much of Johnson’s new backroom staff.

Three years after the “Leave” campaign won that referendum by 52%-48%, Britain remains in the 28-nation bloc.

Brexiteers blame May, who resigned in defeat after failing — three times — to secure Parliament’s backing for her divorce deal with the bloc. Her allies point out that it was hard-core Brexit supporters who sank the deal because they felt it kept the U.K. too closely bound to the EU’s rules.

Johnson, who won an election of Conservative members to replace May as party leader and prime minister, has vowed to complete Brexit and silence “the doubters, the doomsters, the gloomsters” who believe it can’t be done.

But the brash Brexit advocate faces the same problems that May faced: heading a government without a parliamentary majority and with most lawmakers opposed to leaving the EU without a divorce deal.

The EU is adamant it will not renegotiate the agreement struck with May on the terms of Britain’s departure and the framework of future relations. Without it, Britain faces a chaotic Brexit that economists warn would disrupt trade by imposing tariffs and customs checks between Britain and the bloc, send the value of the pound plummeting and plunge the U.K. into recession.

Lawmakers who oppose a no-deal Brexit — include some of the May government ministers swept away by Johnson — are vowing to put up a fight when Parliament returns from a six-week summer break that starts Friday.

That has led to speculation that lawmakers could topple the government in a vote of no-confidence.

Johnson also could call a snap fall election in hopes of gaining a majority in Parliament for his plans.

The country’s next scheduled election is not until 2022.

“We live in a parliamentary democracy, you can never rule out general elections in that sense,” said Rishi Sunak, the new chief secretary to the Treasury.