Arrest Made in Videotaped Dousing of NYPD Officers

The NYPD has arrested a man accused of dumping water on police officers, in an incident seen widely on video.

Video tweeted by @NYScanner showed a man, allegedly Thomas, walking up to police officers in Brownsville – who are already wet from a previous soaking – and dousing them with a bucket of water; the officers simply wipe their faces and walk away.

NYPD Chief of Department Terence Monahan tweeted that the suspect was “a known gang member.”

“Actions like we’ve seen in videos recently will NEVER be tolerated in this city,” Monahan wrote. “YOU WILL BE ARRESTED.”

In another video tweeted by @NYScanner, several men throw water on officers as they make an arrest in Harlem. One of the men then throws the empty bucket at an officer. Three men are wanted in that case. 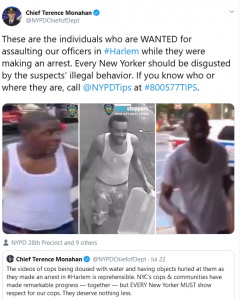 The videos sparked outrage and led police officials to urge officers not to tolerate the behavior and to launch a search for suspects.

The appearance that the pranksters on both videos showed little fear of reprisal also fueled accusations against Democratic Mayor Bill de Blasio and other liberal politicians that their police reform policies have fostered a climate of disrespect for officers on the beat.

Monahan also announced Wednesday that police have arrested two men accused of dousing a woman with water, damaging her phone, as she spoke with police in Harlem.

Isiah Scott, 23, and Chad Bowden, 28, both of Harlem, were arrested and charged with criminal mischief, harassment and disorderly conduct.