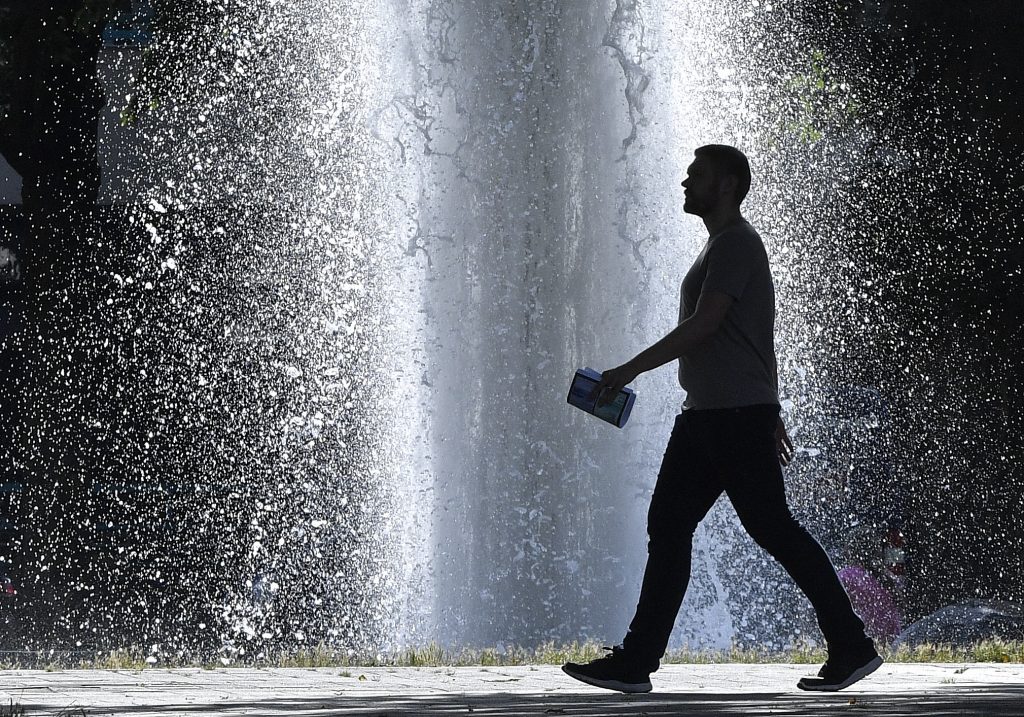 Europeans cooled off in public fountains Wednesday as a new heat wave spread across parts of the continent and was already breaking records.

Belgium and Germany registered their highest-ever temperatures, while the Netherlands saw its hottest day in 75 years.

And the mercury is expected to rise even further.

Paris and other parts of France could see temperatures exceeding 40 C (104 F) on Thursday along with Germany, Belgium, Netherlands, Luxembourg and Switzerland.

The heat is putting pressure on authorities to help protect the elderly and the sick. Air conditioning is not common at homes, offices, schools or hospitals in European cities.

The weather is also aggravating droughts since it hasn’t rained much in many parts of Europe this summer. The combination of heat, wind and possible lightning from thunderstorms also increases the risk of wildfires.

WHY IS IT SO HOT?

The second likely-to-be-record-breaking heat wave in two months in Europe includes some of the same ingredients of the first — hot dry air coming from northern Africa. That hot air is trapped between cold stormy systems in the Atlantic and eastern Europe and forms “a little heat dome,” said Ryan Maue, a private meteorologist in the U.S.

This heat wave is a relatively short event where the heat comes with a southerly wind — and dust — from Africa’s Sahara Desert, in contrast to the big European heat waves of 2003 and 2010 which lasted much longer and were sustained by a stationary high pressure system with little wind, experts say.

At the end of June, several countries reported record temperatures, and France hit its all-time heat record: 46 C (114.8 F) in the small southern town of Verargues.

IS CLIMATE CHANGE CAUSING THIS?

Heat waves are happening more frequently in large parts of Europe, Asia and Australia, experts say. As the world warms, scientists say there will be more and hotter heat waves, but attributing single events to climate change involves precise computer modeling and calculations.

A team of European climate scientists did a quick, non-peer reviewed analysis of Europe’s June heat wave and found man-made warming made it at least five times more likely.

“Either of the two European heat waves this summer would have been remarkable in isolation. But now we are seeing multiple episodes of record heat in a given summer. By mid-century, we will simply call these episodes ‘summer’ — if we continue on this trajectory,” said Pennsylvania State University climate scientist Michael Mann, who wasn’t part of the European group.

The heat waves aren’t just because the world is 1 degree Celsius warmer than before the industrial era, but also because climate change and the melting of Arctic sea ice has slowed down the jet stream, which is the river of air that moves weather along, Mann said. The slow jet stream is “a big part of the story when it comes to these very persistent heat extremes we have seen in recent summers,” Mann said in an email.

HOW HOT COULD IT GET THIS WEEK AND WHERE?

Temperatures in France especially are likely to be 15 C (27 F) higher than normal, with Paris likely to break its all-time hottest record mark of 40.4 degrees (104.7 Fahrenheit). Surrounding areas around Paris may hit 41 or 42 C (106 to 108 Fahrenheit), weather experts said.

The Dutch meteorological institute tweeted that Wednesday’s heat wave broke a record that stood for nearly 75 years of the hottest temperature ever recorded in the Netherlands. The Dutch weather service Weerplaza said that the southern city of Eindhoven reported a temperature of 39.3 (102.7 F) Wednesday afternoon.

Belgium measured its highest temperature since records were first kept in 1833. In sun-baked Kleine Brogel in northeastern Belgium, temperatures rose to 39.9 C (102.3 F), and the weather forecaster of the Royal Meteorological Institute said that it was “the highest ever Belgian temperature.”

Also, temperatures won’t cool down much at night, and maybe stay around 24 C (75 F) or higher.

WHAT ARE PEOPLE AND AUTHORITIES DOING TO STAY COOL?

France in particular is haunted by the 2003 heat wave that killed an estimated 15,000 people there, most of them isolated elderly people whose families in many cases were on vacation. The country has since taken measures to try to ensure such a catastrophe isn’t repeated.

Those measures include a color-coded heat alert system to warn people when temperatures are expected to rise to dangerous levels in their area. The alert system went to its maximum level of red for the first time during last month’s heat wave, when France saw its highest-ever recorded temperature.

There are also public service announcements on media and in public transportation systems about risks of high temperatures, telling people to drink water and watch out for isolated elderly people.

Millions of euros in extra funding for emergency services, including more staff members in hospitals and nursing homes overwhelmed in 2003. A government report at the time blamed the death toll on lack of coordination among government agencies, nursing homes that lacked air conditioning and overnight staff, lack of a public alert system, and other problems.

In the Netherlands, local authorities have taken an unusual precaution — with trucks scattering salt on the roads like they usually do in the winter.

The salt spreaders are usually used to prevent ice forming on Dutch roads in the cold, but Arnhem municipality started using them to cool off asphalt that is baking in the heat wave.

The city says in a statement that the salt “attracts moisture from the air and cools the asphalt.” It also prevents the asphalt from becoming sticky.

Across London, authorities started handing out water and sunscreen to homeless people and opened day centers for them to rest and shower. In the Lewisham district of the British capital, garbage collectors will start working as early as 5 a.m. in the morning to beat the heat.

London police warned people not to swim in the city’s River Thames after a young man died there Tuesday night.

“Whilst at times, the Thames may look appealing, especially in this hot weather, it remains very dangerous all year round,” police said in a statement. “On initial entry the water can seem warm on the surface, but further in it can be freezing cold and there are often very strong undercurrents.”

WHEN IS IT OVER?

The heat wave will end in a few days. On the weekend, temperatures are expected to fall. However, quite often end of a heat wave brings storms, including lightning and heavy flooding.