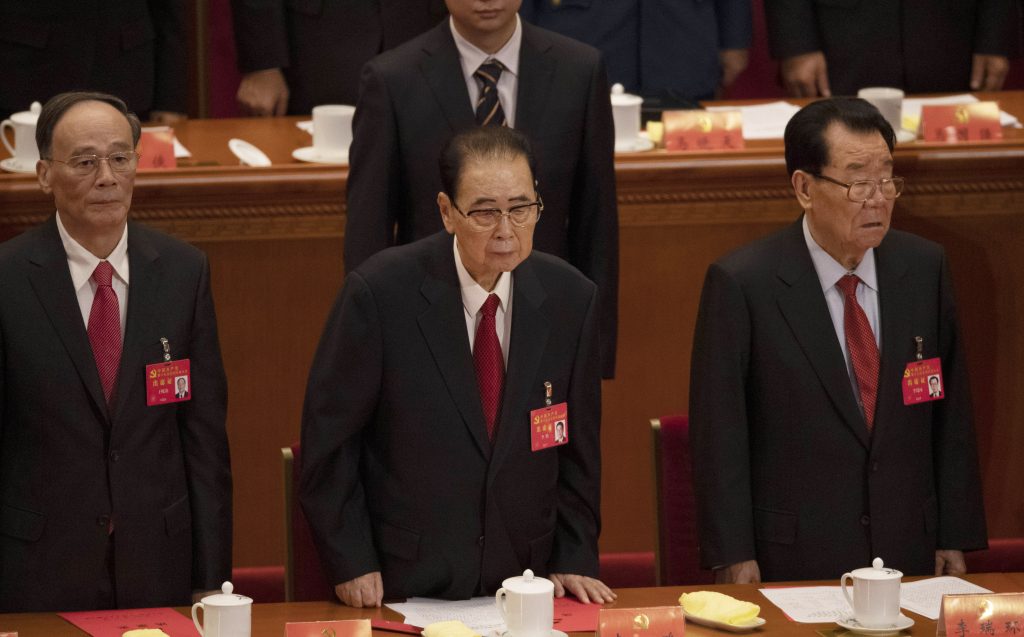 Li Peng, a former hard-line Chinese premier best known for announcing martial law during the 1989 Tiananmen Square pro-democracy protests, has died. He was 90.

Li, a cautious, uninspiring figure, was a keen political infighter who spent two decades at the pinnacle of power before retiring in 2002. He leaves behind a legacy of extended and broad-based economic growth coupled with authoritarian political controls.

While broadly disliked by the public, he oversaw China’s reemergence from post-Tiananmen isolation to rising global diplomatic and economic clout, a development he celebrated in often defiantly nationalistic public statements.

“Ridding themselves from the predicament of imperialist bullying, humiliation and oppression, the calamity-trodden Chinese people have since stood up,” Li said in 1995 in a speech for the Oct. 1 anniversary of the 1949 revolution that brought the ruling Communist Party to power.

One reminder of Li will likely stand for ages to come: During his final years in power, he pushed through approval for his pet project, the gargantuan $22 billion Three Gorges Dam on the Yangtze River, which forced 1.3 million people to leave homes that were swallowed up by its enormous reservoir.

Li stepped down as premier in 1998, becoming chairman of the National People’s Congress, China’s parliament. He retired from the party’s seven-member ruling Standing Committee in 2002 as part of a long-planned handover of power to a younger generation of leaders headed by Hu Jintao.

In his later years, Li rarely appeared in public, and was usually seen only at official gatherings aimed at displaying unity such as the 80th anniversary of the founding of the People’s Liberation Army in 2007.

As his profile waned, he reportedly began lobbying older colleagues to support his children’s political ambitions, though with no clear success.

Li returned to the headlines in 2010 when a Hong Kong publisher announced he had Li’s purported memoir on the Tiananmen Square crackdown. The publisher later halted the book’s release, claiming copyright problems, but supposed excerpts of the diaries were leaked online.

Li was one of the few leaders to inspire real dislike among the nation’s masses, although he was said to inspire loyalty among his subordinates.

Born in October 1928 in Chengdu, a city in southwestern China, he was adopted by the late Premier Zhou Enlai after Li’s father, an early communist revolutionary, was killed by the rival Nationalists in 1931.

He shrugged off questions of nepotism, saying he was one of many war orphans cared for by Zhou and his wife, Deng Yingchao. But he said “their ideals and moral influence had a profound influence on my upbringing.”

Li joined the Communist Party in 1945 after joining Zhou, Mao Zedong and others at their wartime guerrilla base of Yan’an in the northwest.

In 1966 he was named director of the Beijing Electric Power Administration, and, according to official biographies, was responsible for ensuring a stable power supply to Beijing and Tianjin during the chaos of the Cultural Revolution.

Li headed what was called the “power industry family.” His wife, Zhu Lin, formerly worked in the Water Resources and Electrical Power Industry. His two sons and one daughter were at one time employed by the same ministry.

He rose quickly after 1979, and in 1985 became a member of the party’s decision-making Politburo with an education portfolio.

It was in that role that he established himself as a conservative, telling students in 1985 that China can never become capitalist: “To allow bourgeois freedoms would only make our country’s affairs chaotic.”

Li’s tough stance when students staged pro-democracy demonstrations in Beijing, Shanghai and other cities in late 1986 and early 1987 helped him win a post on the powerful Politburo Standing Committee, and he became acting premier in November 1987.

Li triumphed over pro-reform party leader Zhao Ziyang in 1989 after the fellow Sichuanese was toppled from power for sympathizing with the students.

“The situation will not develop as you wish and expect,” an angry Li told student leaders in a confrontational meeting on May 18, 1989.

The next night, Li, flushed with anger, went on China’s national media to announce martial law in Beijing.

“The anarchic state is going from bad to worse,” he said. “We are forced to take resolute and decisive measures to put an end to the turmoil.”

On June 3-4, troops invaded the city, killing hundreds, and perhaps thousands, of Beijing residents on their way to ending the student occupation of Tiananmen Square.