As Heat Wave Breaks Across Northeast, Thousands Left Without Power 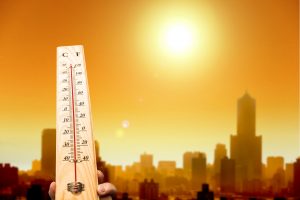 Severe wind and rain in the northeastern states left thousands without power on Monday and into early Tuesday, even as a record-breaking heat wave ebbed.

The heat wave blanketing about a third of the U.S. brought thunderstorms along with cooling rain when it burst on Monday, the National Weather Service said.

The hardest-hit area was New Jersey, with about 300,000 customers still without power early on Tuesday, tracking site PowerOutage.us showed.

“The good news is that the heat wave is definitely over,” Oravec said. “It’s cooled down. Today it’ll be about 76 degrees Fahrenheit (24.4 C.) in New York City and roughly in the high 70s to low 80s through New Jersey and the northeast.”

Many New Yorkers experienced their second successive weekend of blackouts, after a July 13 outage left more than 73,000 homes and businesses without power for about three hours.

About 18,000 customers were without power in New York City, media said, for a total of 22,000 in the metro area by early Tuesday.

Some residents have been without power since Sunday night, when Con Edison shut off supply to about 50,000 customers in New York City and Westchester to avert strain on the system, even as temperatures soared to 100 degrees Fahrenheit (37.7 C.).

The shutdown was necessary for repairs by Con Edison to prevent a bigger outage, Mayor Bill de Blasio said on Twitter at the time, tasking city personnel to take generators to nursing homes and open cooling centers for residents.

On Monday, he criticized Con Edison for not taking preventive measures before the latest outage, telling a news conference the forecast of a heat wave meant the situation had been predictable, and therefore preventable.

In Michigan, about 150,000 homes and businesses were still without power early on Tuesday after weekend thunderstorms knocked out power in much of the metro Detroit area.

Temperatures in the Detroit area are forecast at about 78 degrees Fahrenheit (25.5 C.).

On Saturday, at least half-a-dozen locations saw one-day temperature records, including a high of 99 F at New York’s John F. Kennedy International Airport and a high of 97 F at Detroit Metropolitan Airport.