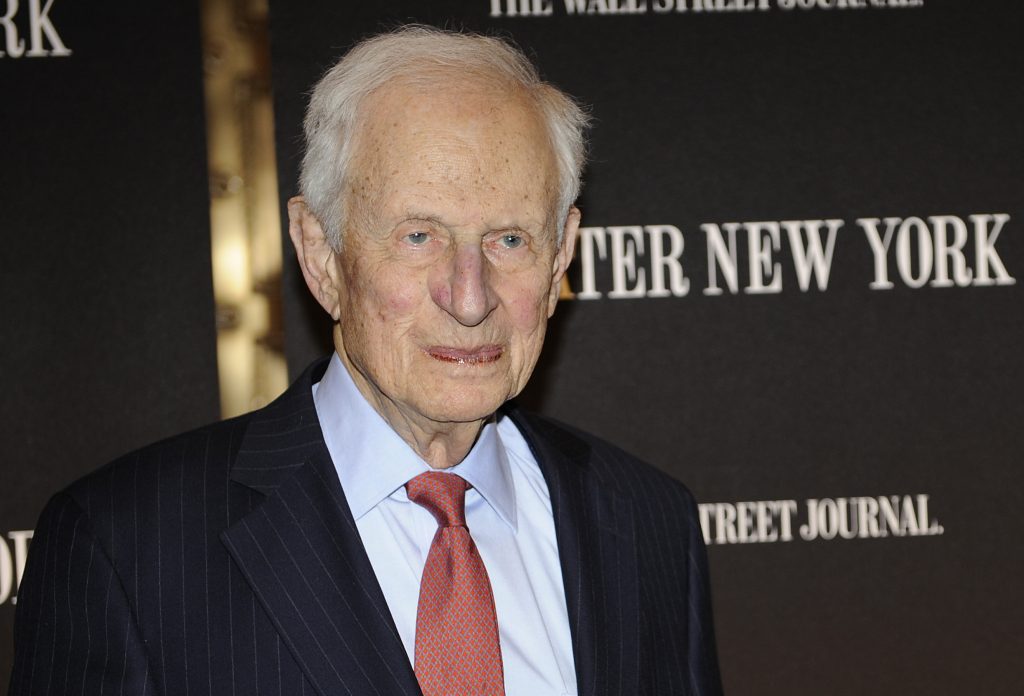 Robert M. Morgenthau, New York’s longest-serving district attorney, who fought crime in executive suites and violence on city streets for 35 years, has died at the age of 99.

First elected as Manhattan district attorney in 1974, Morgenthau won eight more four-year terms before retiring in 2009, overseeing some of New York’s most sensational cases. He was known as a tireless prosecutor of white-collar crime, his targets ranging from L. Dennis Kozlowski, ex-chief executive of Tyco International Ltd., to money-laundering banks and mobsters in the garbage and garment industries.

“If you want people to have confidence in their government, you’ve got to show that people who have economic power or political power are not immune from prosecution,” Morgenthau said.

Morgenthau was an outspoken foe of the 1995 state law that reinstated capital punishment in New York. He never sought the death penalty in any case, and after the law was overturned on a technicality, he said, “The death penalty exacts a terrible price in dollars, lives and human decency.”

He began confronting corporate crime in the 1960s, when he was the United States Attorney for the Southern District of New York. He brought high-profile federal cases for a decade against executives who had never faced public humiliation.

“He really is the father of white-collar criminal prosecutions,” said Gary Naftalis, a lawyer who worked under Morgenthau as an assistant U.S. attorney.

As district attorney, Morgenthau rarely handled a case himself. He delegated prosecutions to key aides in his office of 500 lawyers and kept abreast of legal issues through a vast network of judges and lawyers. U.S. Supreme Court Justice Sonia Sotomayor was among his assistant district attorneys, as was Eliot Spitzer.

He was criticized for hiring mostly Ivy League graduates and the offspring of rich and famous families. John F. Kennedy Jr. worked in his office, as did Dan Rather Jr. and Cyrus Vance Jr. Vance Jr., the son of the former U.S. secretary of state, won election in 2009 to succeed Morgenthau.

“If having a famous father were a disqualification,” Morgenthau responded to critics, “I wouldn’t have gotten my job.”

Robert Morris Morgenthau was born July 31, 1919, in New York to a wealthy family of German-Jewish origin. Though privileged, Morgenthau’s background didn’t quite fit the “patrician” label often attached to his name.

His grandfather, Henry Morgenthau, arrived in the U.S. from Germany at age 10, penniless and speaking no English. He worked his way through law school, made a fortune in real estate and became U.S. Ambassador to Turkey in World War I.

Morgenthau’s father, Henry Jr., served as President Franklin D. Roosevelt’s secretary of the treasury from 1934 to 1945. A non-practicing Jew like his own father, Henry Jr. tried but failed to persuade the U.S. government to take a more active role in rescuing European Jews from Hitler’s Germany.

Until then, as Morgenthau’s older brother Henry III wrote in Mostly Morgenthaus (1991), a 501-page family history, “all significant vestiges of ethnicity in my family had been thoroughly camouflaged, and the Morgenthaus had assumed protective coloration to blend in with Protestant America.”

Morgenthau grew up in Manhattan and on his family’s Hudson Valley apple orchard, Fishkill Farms. He graduated from Amherst College in Massachusetts in 1941 and enlisted in the U.S. Navy in World War II, rising to lieutenant commander. In 1944, the Germans sank his ship, the USS Lansdale, and he floated hours in the Mediterranean before being rescued.

“I made a deal with the Al-mighty,” he recalled on his 88th birthday in 2007. “If I got out alive, I’d devote my life to some form of public service. I’m still paying back.”

His office walls were covered with historical documents, such as photos of FDR and a letter to him as a schoolboy from Eleanor Roosevelt.

Morgenthau received a law degree from Yale University in 1948. He then practiced law for 12 years at the New York firm of Patterson, Belknap & Webb.

He was riding to the airport one day with Robert Patterson, the law firm’s head, when the boss realized he’d left important papers behind. Patterson sent Morgenthau back to bring them on a later flight – then died when his plane crashed.

“For many years thereafter, Bob limited his travels to surface transportation,” his brother wrote in his book.

In 1961, after heading a Bronx election committee for John F. Kennedy, Morgenthau was named U.S. Attorney for the Southern District of New York. He became an energetic prosecutor of corporate felonies and organized crime, set up a securities-fraud unit and brought Internal Revenue Service lawyers to trial on bribery charges.

He succeeded in convicting accountants who had certified false financial reports. The case was upheld by the U.S. Court of Appeals, setting a legal precedent that accountants may be held liable for misleading documents.

He interrupted his crime-fighting career in 1962 to run, unsuccessfully, as the Democratic candidate for governor against Nelson Rockefeller. He remained U.S. Attorney until late 1969, forced out by Richard Nixon – who expected prosecutors appointed by his Democratic predecessor to step down.

Morgenthau became New York’s top prosecutor amid a fiscal crisis and a wave of drug-related crime. In 1975, when Manhattan had 648 homicides, he focused on fighting violent crime. By 2004, he could report that homicides had dropped to 91 – a rate that plunged to 65 in 2007, he said.

The drop in violence allowed his office to pursue the financial crimes that he said undermined the city’s economic viability.

Among Morgenthau’s corporate prosecutions, Dennis Kozlowski was sentenced to 8-to-25 years for looting Tyco of $600 million. Fraud charges against Bank of Credit and Commerce International generated $800 million in fines; the Bank of England closed BCCI in 1991.

Morgenthau also created a labor racketeering team and targeted fraud in the garbage and garment industries, though his drive to root out white-collar crime led to clashes with his former employer, the U.S. Attorney’s office.

One turf battle with then-U.S. Attorney Rudolph Giuliani came when both went after the same defense contractor. It took weeks before Morgenthau agreed to share documents his office had seized in trying to be first to bring charges against the shady outfit.

Morgenthau ran unopposed in most elections for district attorney. In 2005, at 86, he faced his stiffest challenge in 20 years. The New York Times endorsed his challenger in the Democratic primary, former State Supreme Court Justice Leslie Crocker Snyder, stating, “it is time for a change.” Morgenthau won re-election with 59% of the vote.

Morgenthau announced in February 2009 that he wouldn’t seek a 10th term. “I never expected to be here this long,” he said.

His first wife, Martha, died in 1972. They had five children: Joan, Anne, Elinor, Robert P. and Barbara. With his second wife, the former Lucinda Franks, a former New York Times reporter, he had two children, Joshua and Amy.