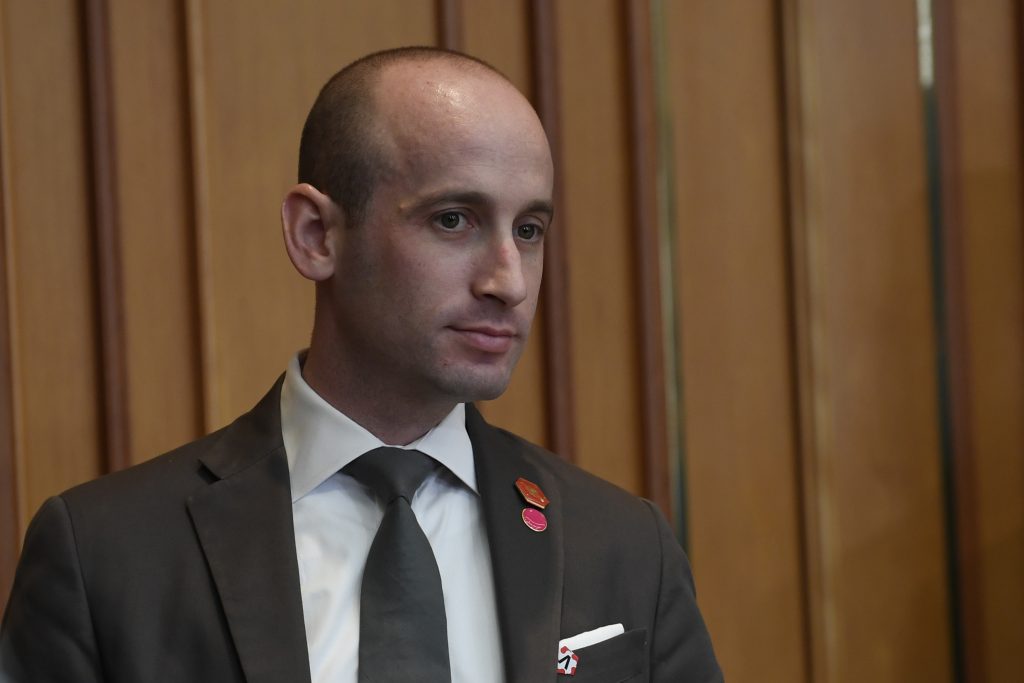 A week after his controversial tweets about four minority congresswomen, President Donald Trump’s aides on Sunday defended his behavior, even as top Democrats sharply criticized him and pushed for greater accountability.

Stephen Miller, a White House senior adviser, had a heated back-and-forth Sunday with Fox News host Chris Wallace over the president’s tweets, as well as a North Carolina Trump rally where the crowd chanted “send her back,” targeting Rep. Ilhan Omar, D-Minn. Omar was born in Somalia and has been a U.S. citizen since she was 17.

Miller defended Trump and said the term “racist” has become a label used to silence and punish people.

Vice President Mike Pence, meanwhile, reiterated that he and Trump were not pleased with the chanting but declined to directly address supporters and tell them not to do it again.

“The president was very clear that he wasn’t happy about it, and that if it happened again, he might make an effort to speak out about it,” Pence said in an interview with CBS News.

President Trump kicked off a firestorm with a tweet in which he said that Omar and three other minority congresswomen frequently critical of the administration – Democratic Reps. Ayanna Pressley of Massachusetts, Rashida Tlaib of Michigan and Alexandria Ocasio-Cortez of New York – should “go back and help fix the totally broken and crime infested places from which they came.”

Asked Sunday about Trump’s frequent criticism of the country, Miller said that anybody running for office points out what the country can do better, but that there’s a difference between those who want to strengthen the “principles of Western civilization” versus people who “want to turn our country into Venezuela.”

“There is a gigantic, enormous distinction between Donald Trump saying, ‘I’m going to get on the world stage and put America first in every single thing we do,’ versus a view that says, ‘America should never come first, and American citizens should never come first,’ which is their view, and that’s what we’re going to take to the ballot box,” Miller said.

Trump has made statements that America needs to improve “out of love” for the country, Miller said.

Wallace at one point questioned Miller about a 2014 tweet in which Trump said of then-President Barack Obama, “Everything he touches turns to garbage.” Ocasio-Cortez has used the term “garbage” to describe certain Trump administration policies, and Republicans have over the past week sharply criticized her over the statement, which they have falsely said was aimed at the country as a whole.

Miller responded by arguing, “These four congresswomen detest America as it is currently constructed.”

Omar continued to criticize Trump and Republicans Saturday night, tweeting that the president’s supporters “should end this charade and accept that this racist president wants every black/brown person deported and Muslims banned. His immigration policies say this much!”

Trump on Sunday morning fired back, declaring in a tweet, “I don’t believe the four Congresswomen are capable of loving our Country.

“They should apologize to America (and Israel) for the horrible (hateful) things they have said.”

Views were split sharply along party lines: 82 percent of Republicans agree with Trump’s remarks, while 88 percent of Democrats disagree.

On ABC, Mercedes Schlapp, an adviser to Trump’s re-election campaign, defended Trump and said the president “disavowed” the racist chants at his rally. Host George Stephanopoulos pushed back, noting that the president did not speak out against the chants during the rally and later retweeted a tweet that said, “Send her back is the new lock her up.”

“He made it very clear that he disagreed with the chant, and I will tell you he stands with those people in North Carolina, across the country who support him,” Schlapp said.

Saying Trump is not a racist, she pointed to the administration’s work on opportunity zones, as well as the low unemployment rates for black and Hispanic communities.

“He’s a compassionate man whose policies have focused on the minority community,” Schlapp said.

But while Trump’s aides were on the defensive, top Democrats blasted his behavior.

“The reality is this is a guy who is worse than a racist,” Sen. Cory Booker, D-N.J., who is running for president, said on CNN. “He’s actually using racist tropes and racial language for political gain, he’s trying to use this as a weapon to divide our nation against itself.”

Booker went on the compare Trump to George Wallace, the governor of Alabama in the 1960s and a notorious segregationist.

“He’s using the exact same language,” Booker said. “We have a demagogue, fearmongering person who is using race to divide.”

Meanwhile, Rep. Elijah Cummings, D-Md., said the president’s behavior brings up painful memories from 50 years ago of being beaten and called racial slurs while trying to integrate a pool.

“I heard the same kind of chants, ‘Go home,’ ‘You don’t belong here,’ and they called us the n-word over and over again,” said Cummings, who is chairman of the House Oversight Committee. “What it does when the president does these things, it brings up the same feelings I had over 50-some years ago. It’s very, very painful; it’s extremely divisive.”

He said Trump’s comments were not “becoming” of a president. He also said that for the first time he can remember in his 37 years of public service, his constituents are scared of their president. Cummings then called on Trump to change his tone and be a role model children can look up to.

“The president has to set the tone; he has to be a role model,” Cummings said.

Rep. Adam Schiff, D-Calif., chairman of the House Intelligence Committee, said the North Carolina crowd’s “Send her back!” chant “didn’t materialize out of nothing; it came from the president’s own tweet and words and incendiary rhetoric.”

“I think, you know, tragically, the president has decided that racism is good politics,” Schiff said on CBS. “Racism is a good political strategy. There’s a reason why he keeps returning to attacking these women of color and the rhetoric that he uses.”