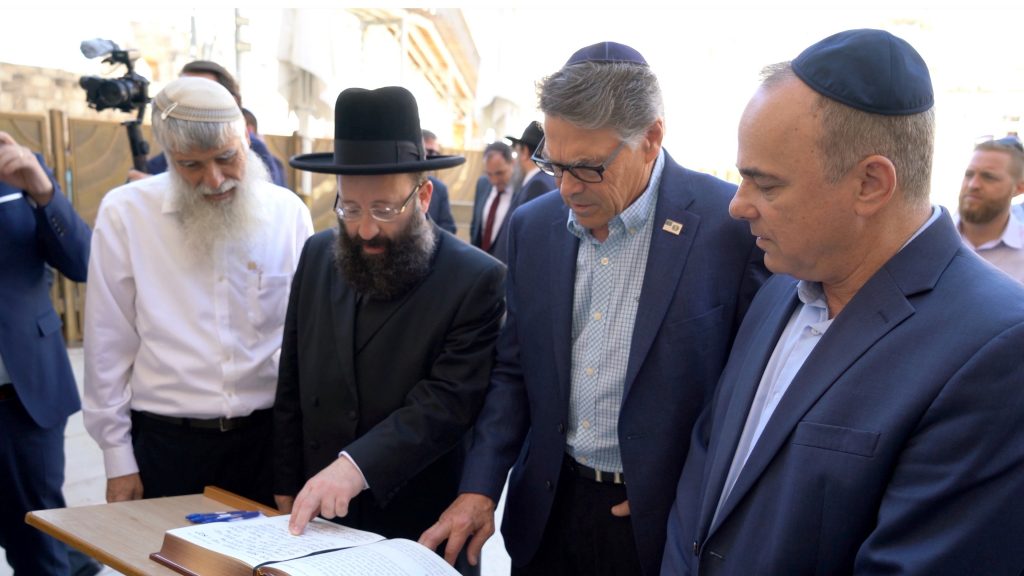 Rick Perry, Secretary of Energy of the United States, came with his wife for a visit to the Kosel and the Kosel Tunnels to begin his official and first visit to the State of Israel on Sunday, according to the Western Wall Heritage Foundation Spokesperson’s Office.

The Rabbi of the Kosel and Holy Sites, Rabbi Shmuel Rabinowitz, greeted the Secretary along with Israel’s Minister of Energy, Dr. Yuval Steinitz, and the Director of the Western Wall Heritage Foundation, Mr. Mordechai (Suli) Eliav.

The Rabbi recited Tehillim Chapter 121 together with the Secretary, who also placed a note between the stones of the Kosel, following tradition.

Rabbi Rabinowitz told the Secretary that there was great symbolism to his visit falling on a day when we mark the fast of the 17th of Tamuz and the beginning of the “Three Weeks” when the Jewish nation mourns and remembers its past and prays for its future.

Israel’s Minister of Energy, Dr. Yuval Steinitz, greeted Perry: “Welcome to Jerusalem, the eternal capital of the Jewish nation. I am sure this visit to the Western Wall will provide positive energies for this important visit to Israel.”

The Secretary took a tour of the Tunnels, guided by the Director of the Foundation, who showed him fascinating remnants and ancient Judaica items that tell the story of Jewish yearning for Yerushalayim throughout the generations. The visit ended at the new model of the Beis Hamikdash, where the Secretary learned of the site’s historic significance for the Jewish people.

The Secretary noted the strong partnership between the United States and Israel and said, “This is a monumental moment for me and for my wife; being here is amazing. I hope our future will be as strong as our history.”