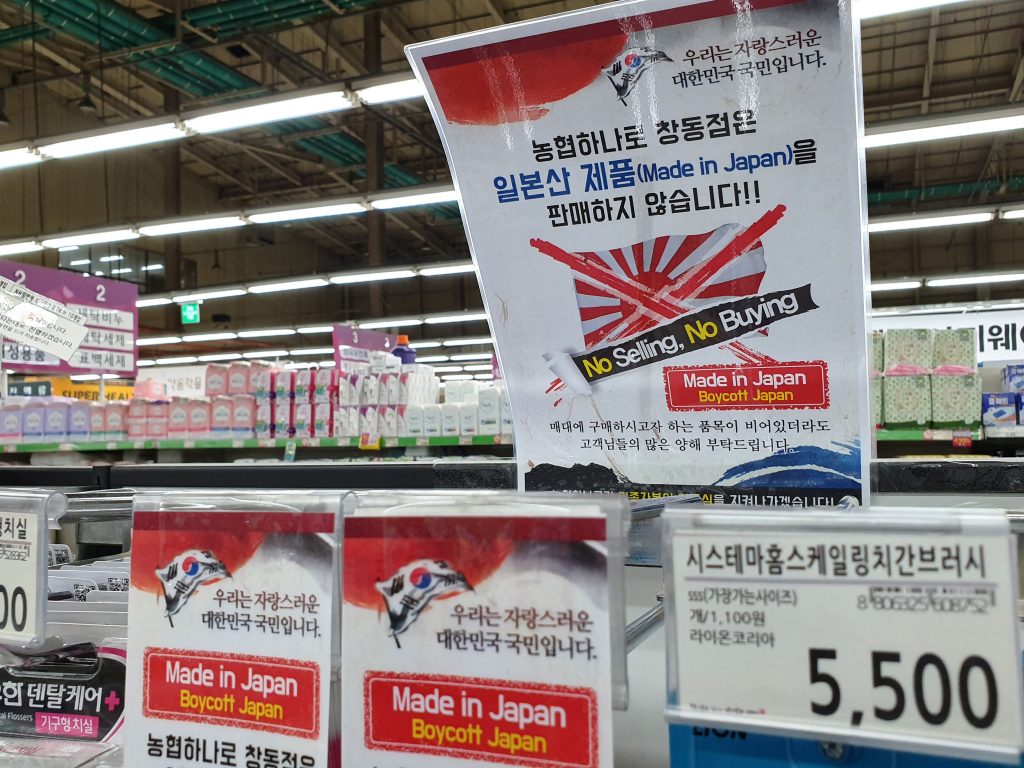 Japan’s foreign minister publicly admonished South Korea‘s ambassador on Friday in a deepening row over compensation for Korean forced laborers that has spilled over into their trade in high-tech materials used to make memory chips and screens.

The dispute between the two important U.S. allies took a deadly turn on Friday when a South Korean man set himself on fire in front of the Japanese Embassy in Seoul in an apparent protest. He later died.

South Korea accused Japan of violating international law with its curbs this month on the export of high-tech materials to South Korean chipmaking giants, which could disrupt global supply chains.

Japanese Foreign Minister Taro Kono summoned South Korea‘s ambassador to Japan, Nam Gwan-pyo, a day after the passing of a deadline set by Japan for South Korea to accept third-country arbitration of the forced-labor dispute.

Relations between the neighbors have been difficult for decades because of South Korean resentment of Japan’s 1910-1945 occupation of the Korean Peninsula.

The forced labor issue was thrust to center stage last year when a South Korean court ordered two Japanese firms to pay compensation to Koreans forced to work for them.

Japan says the whole compensation issue was settled under a 1965 treaty.

Kono said South Korea had to take swift measures to correct what Japan says was the improper ruling by South Korea‘s Supreme Court ordering the compensation.

“What the South Korean government is doing now is equivalent to subverting the post-World War II international order,” Kono said at the beginning of a meeting with Nam.

Nam responded by saying South Korea was working every day to create an environment in which the lawsuits could be dealt with in a way that would be acceptable to both sides and not harm bilateral ties.

Nam said South Korea had already proposed a plan to resolve the issue, but that drew a blunt interjection from Kono.

“Hold on,” Kono said. “We’ve already told the South Korean side the South Korean proposal was totally unacceptable, and that that is not something that would redress the situation where international law is violated. It is extremely impertinent to propose it again by pretending to not know that.”

Neither official specified what that plan was, but last month Japan rejected a South Korean proposal to form a joint fund with Japan to compensate South Korean plaintiffs.

Later, South Korea‘s Foreign Ministry rejected Japan’s call for third-party arbitration as arbitrary and said Japan must remember the wrongs it committed during colonial rule and make efforts to heal the wound.

Japan has denied that the dispute over compensation is behind the export curbs even though one of its ministers cited broken trust with South Korea over the labor dispute in announcing the restrictions.

Japan has instead cited “inadequate management” of sensitive items exported to South Korea, with Japanese media reporting that some items ended up in North Korea.

South Korea denied that and responded by suggesting Japan had been lax in abiding by international sanctions against North Korea.

“It is Japan that violated the WTO free trade regime and … international law by taking measures that bring serious damage to [the] global value chain by unilaterally imposing export curbs, when diplomatic efforts to resolve the forced labor issue had not been exhausted,” Kim Hyun-chong told a briefing.

South Korea could not ignore the ruling by its Supreme Court ordering compensation, he said.

South Korea‘s Ministry of Trade repeated calls for Japan to hold serious talks by July 24 over its export controls.