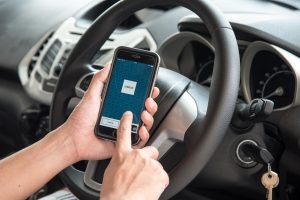 Uber passengers in multiple cities were startled Wednesday when they were charged 100 times their normal fare for short trips, a glitch that sparked jokes about surge pricing gone wild.

Riders in cities including New York, Washington and San Diego took to social media to post about the sky-high rates, a problem Uber confirmed, though it declined to say how widespread the issue was. Some who ordered food for quick delivery said they were also overcharged.

One social-media user reported that Uber maxed out her husband’s card with a charge of $1,905, when it was supposed to be $19.05. “Not cool, especially on his birthday,” she added.

Another woman posted to social media she was charged $1,308 for a $13.08 trip. The charge was so high it triggered a fraud alert, according to a screenshot the rider posted on Twitter.

One passenger’s bank said it was a known issue that several callers had reported Wednesday.

Uber said the glitch has been fixed. The company said the fare would be corrected so riders are only charged the amount for their actual trip, though they may temporarily see an inaccurate trip fare on their credit or debit cards; passengers won’t need to dispute the charges with their banks.

“We understand that this has been frustrating,” Uber said in response to one of the riders’ complaints. “There was a known issue that caused your authorization hold to be very high. Our team has already fixed this issue. Thank you so much for your patience.”

A Hamodia reporter in New York experienced this issue as well.

While attempting to order an Uber trip for $9.31 from his home to the Hamodia office, the reporter was shocked when his debit card was declined – then, moments later, he received a text message from his bank’s fraud department, asking if he had ordered an Uber for $931. When he replied, “No,” his card was turned off.

Forced to make a trip to the bank for a new card, the reporter used Lyft.