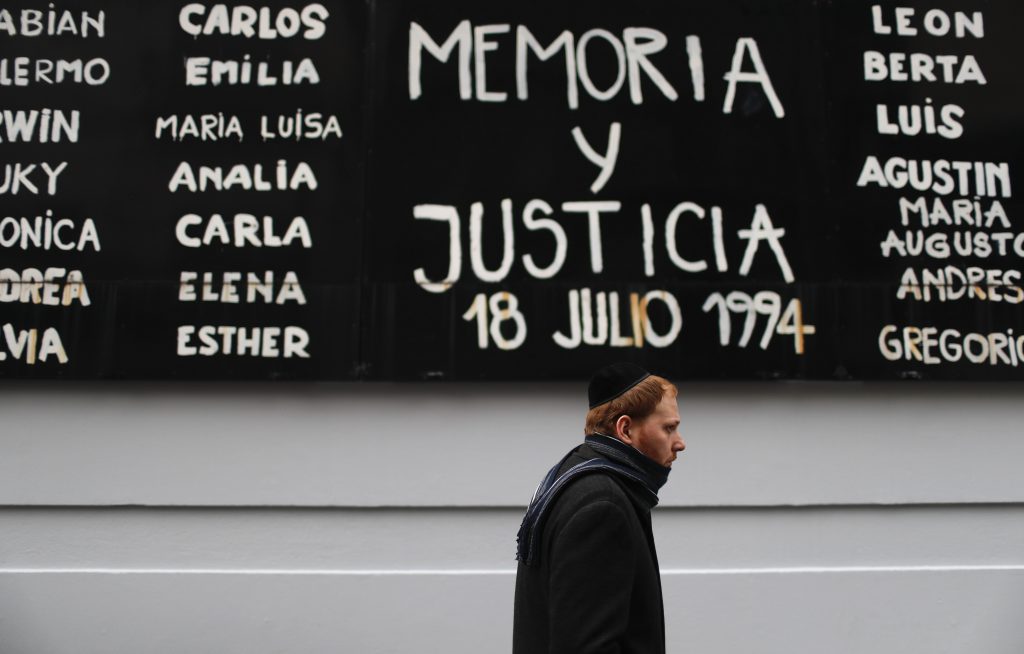 Argentinian authorities designated Hezbollah, which it blames for two attacks on its soil, a terrorist organization on Thursday and ordered the freezing of the Lebanese Islamist terrorist group’s assets in the country.

The announcement coincided with a visit by U.S. Secretary of State Mike Pompeo as Argentina marks the 25th anniversary of the deadly bombing of a Jewish community center in Buenos Aires in which 85 people died. Argentina blames Iran and Hezbollah for the attack. Both deny any responsibility.

Argentina also blames Hezbollah for an attack on the Israeli embassy in Buenos Aires in 1992 that killed 29 people.

“The entire world must unite in the struggle against the terror activities by Iran and its proxies,” Katz added.

The Argentine government’s Financial Information Unit ordered the freezing of assets of members of Hezbollah and the organization a day after the country created a new list for people and entities linked to terrorism.

“At present, Hezbollah continues to represent a current threat to security and the integrity of the economic and financial order of the Argentine Republic,” the unit said in a statement.

The freezing of assets automatically places Hezbollah on Argentina’s registry, designating it a terrorist organization, a government source with direct knowledge of the action confirmed. The designation is the first by any country in Latin America.

Last year, Argentina froze the assets of 14 members of the Barakat Clan, an extended family that officials say has close ties to Hezbollah.

U.S. and Argentine officials say Hezbollah operates in what is known as the tri-border area of Argentina, Brazil and Paraguay, where an illicit economy funds its operations elsewhere.

It is not yet clear whether Argentina’s new designation will lead to other concrete actions against Hezbollah in the area, but some kind of U.S. security support, including increased intelligence sharing, could follow, said Benjamin Gedan, director of the Wilson Center’s Argentina Project in Washington.

Argentina’s decision to join the United States in designating Hezbollah a terrorist group is a significant win for President Donald Trump’s administration and could put pressure on Brazil and Paraguay to follow suit, Gedan said.

The United States, looking to revive a security relationship that suffered after a souring in diplomatic ties during the previous administration of President Cristina Fernandez, views President Mauricio Macri as a partner, particularly as traditional European allies have been slower to offer support amid U.S. tensions with Iran.

“Clearly, they are not a good replacement for European allies, because they don’t engage Iran significantly, so they cannot put on the same commercial and economic pressure as the Europeans,” Gedan said of Washington’s allies in Latin America.

“But at least it gives the impression that the Trump administration is not standing alone,” he said, adding that the United States put significant pressure on Argentina to prepare the announcement in time for Pompeo’s visit.

Other U.S. allies that designate Hezbollah or its military wing as a terrorist organization include Canada, Britain, Australia, New Zealand, the European Union and Israel.

Argentina’s investigation into the 1994 truck bomb attack on the Argentine Israeli Mutual Association (AMIA), meanwhile, has made little progress. No one has been brought to trial in either that case or the Israeli embassy bombing.