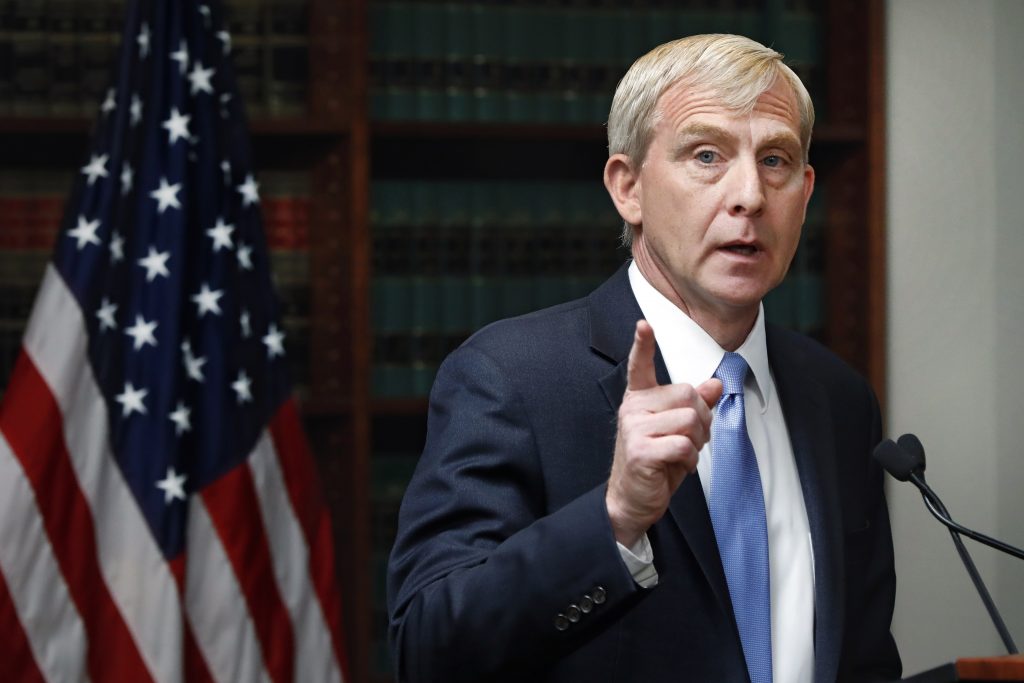 The Justice Department will not bring federal charges against any police officers involved in the death of Eric Garner, a 43-year-old black man whose recorded takedown in New York in 2014 helped coin a rallying cry for those concerned about law enforcement’s treatment of minorities, authorities announced Tuesday.

For Garner’s supporters, the decision is a disappointing — albeit long expected — end to a case that had languished for years as various components of the Justice Department disagreed about what to do. The case was one of the first to spark the Black Lives Matter movement and draw attention to police abuse of minorities, but it ended as most others do, with prosecutors offering condolences in lieu of indictments and distraught family members left feeling justice was not served.

At a news conference Tuesday, Garner’s mother, Gwen Carr, said the Justice Department had “failed us,” and called on the New York City police commissioner to fire Daniel Pantaleo, the officer caught on video wrapping his arm around Garner’s neck before he died.

“Five years ago, my son said, ‘I can’t breathe,’ 11 times, and today we can’t breathe, because they have let us down,” Carr said.

Prosecutors, including Richard Donoghue, the U.S. attorney in Brooklyn, delivered the news to Garner’s family at a tense meeting Tuesday morning, then held a news conference to explain their decision.

Donoghue said that after years of debate, Attorney General William Barr ultimately decided that prosecutors had insufficient evidence to demonstrate that Pantaleo used “objectively unreasonable” force and “willfully” used more force than he believed was necessary — two elements necessary to win a conviction on federal civil rights charges. He called Garner’s death a “tragedy,” but said prosecutors could not prove it was a federal crime.

“We know and understand that some will be disappointed by this decision, but it is the conclusion that is compelled by the evidence and the law,” Donoghue said.

Stuart London, an attorney for Pantaleo, said, “It is always a tragedy when there is a loss of life. Officer Panteleo utilized NYPD-approved techniques to make the arrest in this case. Officer Panteleo is gratified that the Justice Department took the time to carefully review the actual evidence in this case rather than the lies and inaccuracies which have followed this case from its inception.”

The case followed a lengthy and tortuous path through the Justice Department, staying alive as three Senate-confirmed attorneys general — Eric Holder, Loretta E. Lynch and Jeff Sessions — finished their terms without bringing it to a conclusion. The decision came just a day before the five-year anniversary of Garner’s death, after which the statute of limitations would have prevented prosecutors from bringing certain charges.

While defending the Justice Department’s ultimate decision, Donoghue apologized for how long the case languished, calling the delay “regrettable and inappropriate.”

“This should never have taken as long as it did,” he said.

From the outset, the Justice Department’s Civil Rights Division argued that charges were warranted. But the FBI and federal prosecutors in New York were wary of bringing a case, and some of their skepticism was documented in internal records, potentially complicating a future trial, current and former law-enforcement officials said.

The tension became so severe that the Justice Department removed New York FBI agents from the team of investigators. Late in Lynch’s term as attorney general, then-Civil Rights Division head Vanita Gupta successfully pushed for her prosecutors to take the lead on the case, and Lynch authorized them to move forward, current and former officials said. But they found some of the previous investigation lacking and knew their work would have to continue into the Trump administration, the officials said.

The tension continued into the Trump administration, with civil rights prosecutors in D.C. recommending charges and federal prosecutors in Brooklyn recommending the opposite, a senior Justice Department official said, speaking on the condition of anonymity to discuss internal deliberations. Donoghue said officials carefully parsed the much-publicized video of Garner’s encounter with police, and that was key in their final decision.

New York officials and advocates for change at police departments reacted with dismay Tuesday after the Justice Department revealed its decision.

“The entire world saw the same devastating video five years ago, and our eyes did not lie,” said New York Attorney General Letitia James. “Today’s inaction reflects a DOJ that has turned its back on its fundamental mission — to seek and serve justice.”

The Justice Department official compared the case to that of former NYPD officer Francis Livoti, who was convicted of federal charges for choking to death Anthony Baez in 1994. Witnesses said Livoti choked Baez for about a minute, stronger evidence of willful conduct, the senior official said.

A Staten Island grand jury also declined to bring charges in Garner’s case – meaning the state cannot now pick up where federal prosecutors left off. Pantaleo was put on desk duty and this summer went through an internal administrative process to determine what discipline he should face. Police Commissioner James O’Neill is expected to make a decision soon on Pantaleo’s future with the police department.

“De Blasio, what’s up?” Emerald Garner, one of Eric Garner’s daughters, said. “When are you going to fire this officer?”

In a statement, the mayor did not directly address Pantaleo’s employment. He criticized federal authorities and announced a policy change that would have the police department begin immediately its disciplinary process for officers involved in the death of unarmed civilians, unless the family requests a delay for the criminal investigation to finish or a judge otherwise prevents the city from moving forward.

New York had long put on hold the disciplinary process for Pantaleo with the Justice Department investigation ongoing.

“Years ago, we put our faith in the federal government to act,” de Blasio said. “We won’t make that mistake again.”

Moore, the attorney for the Garner family, said every presidential candidate should be pressed to take a position on the case and noted that the statute of limitations had not expired to charge a civil rights violation resulting in a death.

“We’re calling on the Democratic candidates to take a position on this and to commit to reopen the investigation,” he said.

Sen. Kirsten Gillibrand, D-N.Y., called the decision “an outrage,” and said the federal justice system had failed Garner’s family. “The NYPD must make their departmental findings fully transparent to the public and take immediate actions to ensure this officer is no longer on the force.”

The city of New York reached a civil settlement with Garner’s family in 2015 for $5.9 million.