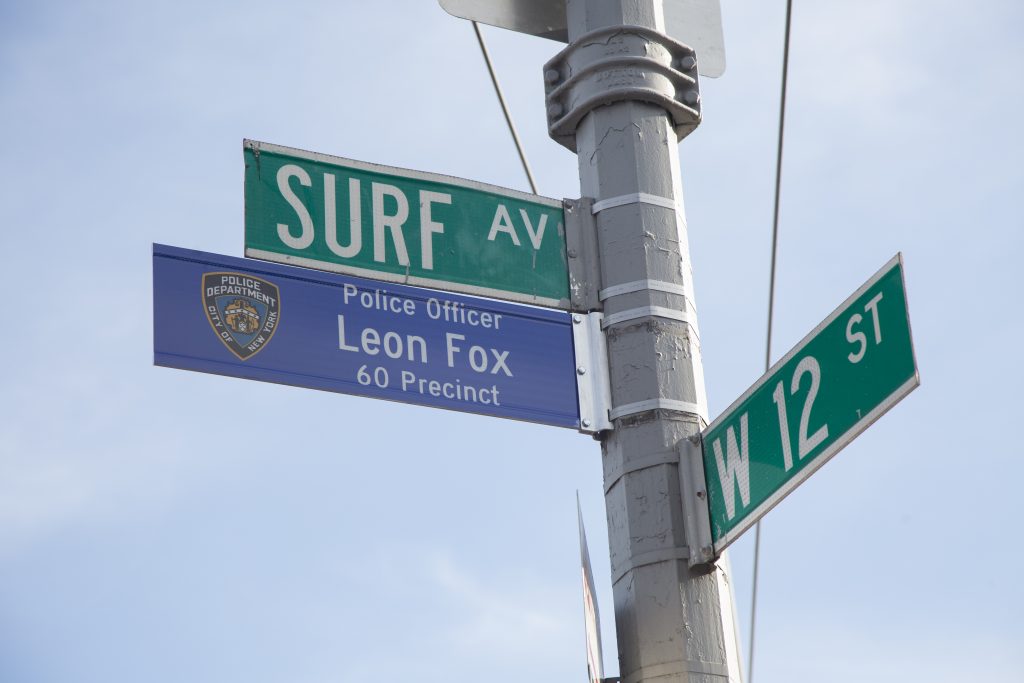 A street in Coney Island was named Monday in honor of a Jewish police officer killed in the line of duty nearly 80 years ago.

On the night of February 16, 1941, Officer Leon Fox, a patrolman in the NYPD’s 60th Precinct, was escorting a theater manager at Surf Avenue and West 12th Street to deposit the day’s earnings. Thieves jumped out of a vehicle, shot Fox six times, then grabbed the manager’s money bag. Fox managed to fire off all six rounds in his pistol before the thieves shot him twice more. He died several hours later at Coney Island Hospital, leaving a widow and young son.

Several years ago, NYPD Officer Albert Mammon – another Jewish officer who was then also assigned to the 60th Precinct – heard about Fox’s story. He approached Councilman Chaim Deutsch, who represents Coney Island, and suggested that Deutsch write legislation for the street to be co-named in honor of Fox. That cause became a passion for Deutsch, and on Monday, at a ceremony attended by hundreds of community members and NYPD officials, the street-co-name sign was unveiled at that intersection just blocks from the Coney Island boardwalk.

Fox’s son Gerald, now 85 years old and living in California, attended the ceremony, as did Leo Katz, a 92-year-old lifelong New Yorker who recalled Officer Fox as the kind policeman who often helped him cross the street to P.S. 225.

“He was a passionate guy; he loved his job and was very friendly to everybody,” Katz told Hamodia. “He knew all the storekeepers and most of the people.”

Councilman Deutsch said that Officer Fox’s legacy “will never be forgotten – and that street sign will make sure of it.”