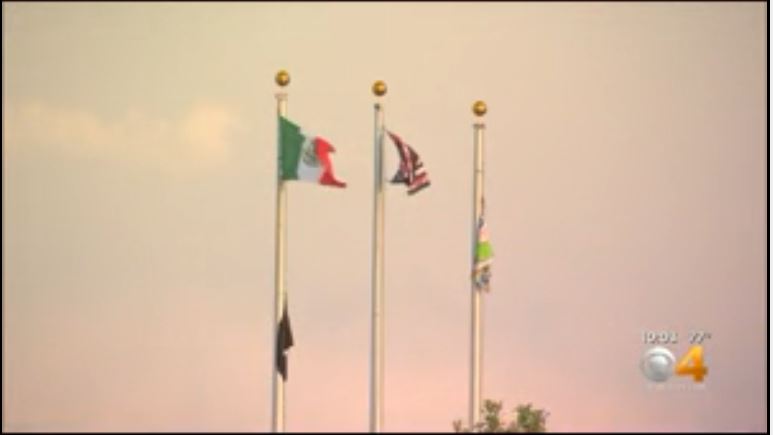 Police say they will be reviewing any available video to help them identity protesters who trespassed and pulled down the American flag in front of an immigration detention center in suburban Denver, tried to burn it and replaced it with a Mexican flag.

Friday night’s protest in Aurora, one of many coordinated across the country, drew about 2,000 people and was mostly peaceful. However, police said Saturday that a few people passed a makeshift barrier outside the center run by the GEO Group and crossed a vehicle bridge, causing hundreds to follow. Some removed three flags — the U.S., Colorado and GEO flags. The two other flags were replaced with ones with anti-police messages.

Cristian Solano-Cordova, a spokesman for the Colorado Immigrant Rights Coalition, told The Denver Post that those who pulled down the flags weren’t affiliated with mainstream immigrants’ rights groups but had coordinated with them to be there.

Claudia Castillo, a 22-year military intelligence major in the U.S. Army and the coalition’s legal services coordinator, said she pleaded with the group of about 25 that pulling down the flag wasn’t part of the plan. She said that rather than pull back, members of the group spit on her, shoved her, and cursed at her.

“It was disgusting and shameful,” Castillo told the Post. “They have compromised our movement, and they stole the spotlight and endangered our undocumented people.”

In a statement on social media , Aurora Police Chief Nick Metz said police decided not to intervene when the flags were being removed to protect the safety of the majority of protesters who were acting peacefully as well as that of officers but they would have acted had there been violence or damage to the property.

He said GEO representatives wanted to step in after the U.S. flag was removed but police asked them not to so they could talk to the official protest organizer, who then encouraged people to disperse. Metz said that de-escalated the situation and there was no need for police intervention after that.

Metz also noted that police had urged GEO to put up water-filled jersey barriers to prevent protesters from crossing the bridge, but the company only placed several traffic cones with a lightweight plastic chain taped to them shortly before the protest.

A spokesman for GEO could not be reached for comment Sunday.