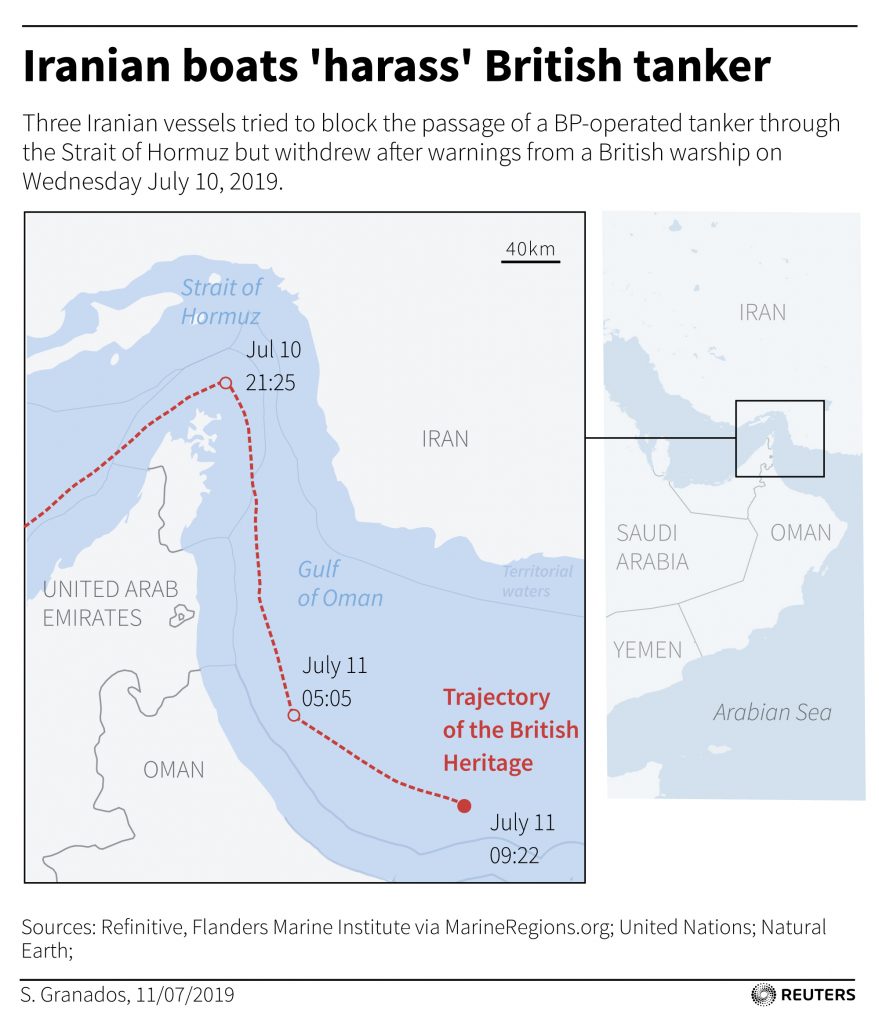 Three Iranian vessels tried to block a BP-operated tanker passing through the Strait of Hormuz but backed off when confronted by a Royal Navy warship, the U.K. government said on Thursday.

Britain urged Iran to “de-escalate the situation in the region” after the British Heritage, a Suezmax oil tanker operated by BP under an Isle of Man flag, was approached.

The incident followed President Donald Trump’s warning he would soon “substantially” increase U.S. sanctions on Iran as part of a drive to curb Iran’s nuclear program and force Tehran to change its regional behavior.

The United States blames Iran for a series of attacks on shipping in the world’s most important oil artery since mid-May, accusations Tehran rejects but which have raised fears the long-time foes could slip into direct military conflict.

The growing confrontation between Iran and the West took another twist last week when British Royal Marines seized an Iranian tanker, the Grace 1, off Gibraltar on suspicion that it was breaking EU sanctions by taking oil to Syria.

A senior Iranian military commander on Thursday said Britain and the United States would regret detaining the vessel, just days after the armed forces chief of staff said the action would not go unanswered.

Heightened tension between Iran and the United States have fanned fears of increasing conflict in countries where Iran and its U.S.-backed Gulf Arab rivals have been locked in proxy battles for predominance in the Middle East.

Last month, Iran shot down a U.S. drone near the Strait of Hormuz and Trump aborted a retaliatory military strike, saying it could have killed 150 people. He has signaled he is open to talks with Tehran without preconditions an offer rejected by Iran’s clerical leadership.

The United States is hoping to enlist allies in a military coalition to safeguard strategic waters off Iran and Yemen, Marine General Joseph Dunford, the chairman of the Joint Chiefs of Staff, said on Tuesday.

Britain, France and Germany have sought to avoid being dragged into U.S. sanctions but say Iran must return to full compliance with the 2015 nuclear deal they were instrumental in brokering.

They have so far avoided triggering a dispute resolution process contained in the deal but it could take new steps in the next two months, including restarting dismantled centrifuges and purifying uranium to a sharply higher threshold, unless it is allow to resume normal oil sales.

Francois Lecointre, the French armed forces chief, described the friction between the United States and France as a “clash of wills”.

“I think it is under control now… I don’t think it can spiral out of control but there can be escalation,” he told the CNews channel.