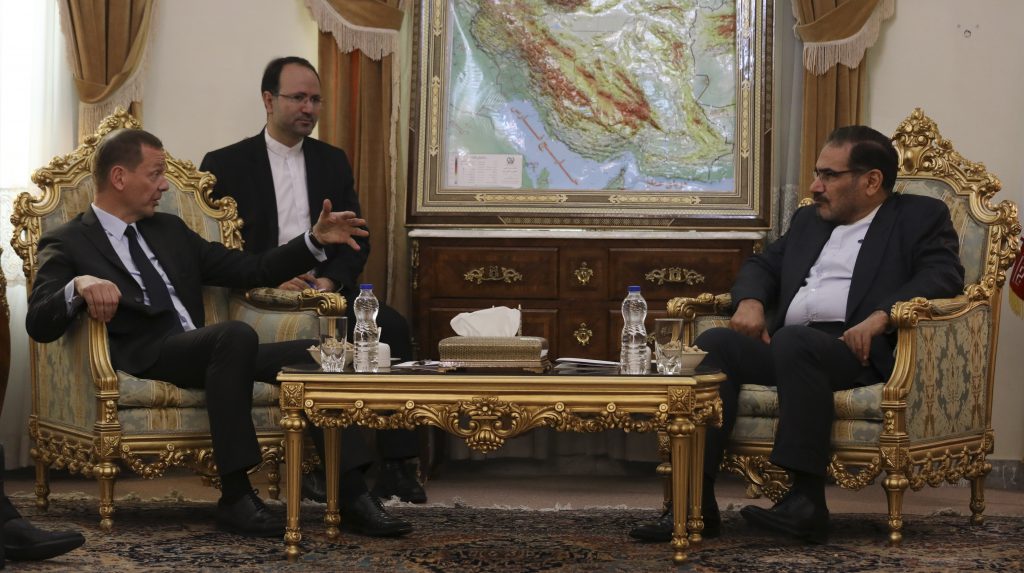 The United States admonished world powers seeking to preserve a deal with Iran on its atomic program on Wednesday not to give in to “nuclear extortion” from Tehran, which has breached the pact’s limitations in recent days in an attempt to get them to provide economic incentives to offset American sanctions.

The U.S. requested the special board meeting of the International Atomic Energy Agency after Iran announced last week that it had exceeded the amount of low-enriched uranium it is allowed to stockpile under limitations set in the 2015 nuclear deal. Since then, it also announced it has started enriching uranium past the 3.67% purity allowed, to 4.5%, and IAEA inspectors verified both developments.

By doing so, Tehran hopes to increase the pressure on the remaining members of the nuclear deal, known as the Joint Comprehensive Plan of Action, or JCPOA, to provide economic relief for American sanctions. It has set an early September deadline until it pushes limits further.

Jackie Wolcott, the U.S. ambassador to international organizations in Vienna, told Iran and others in the room that Washington was open to “negotiation without preconditions” on a new nuclear deal, and that “the only path to sanctions relief is through such negotiations, not nuclear extortion.”

“We are committed to denying Iran the benefits it seeks from these most recent provocations,” she said. “It is imperative that this misbehavior not be rewarded, for if it is, Iran’s demands and provocations will only escalate.”

President Donald Trump underscored the comments later, tweeting that the nuclear deal was “terrible” and threatened that “sanctions will soon be increased, substantially!” Trump has long rejected the deal, saying it was too generous to Tehran and did not address its involvement in regional conflicts.

Russian delegate Mikhail Ulyanov fired back at the meeting that the U.S. could not both reject the deal and call for Iran’s full implementation of it.

“Although for some reason they only refer to Tehran, in fact the United States, who are refusing to fulfill its own obligations under the nuclear deal, lost any right to demand this from others,” he said.

At the same time he slammed the U.S. decision to withdrawal from the deal and reinstate sanctions, saying it was “neither legitimate nor legal” and should not be accepted by the international community.

“Due to costly and predictable consequences of sanctions, they should be seen as weapons of warfare and means of aggression,” he said. “Economic sanctions are, in fact, collective punishment of the ordinary people, contrary to the objectives and purposes of human rights, and should be considered as crimes against humanity.”

He later told reporters that if the U.S. was serious about wanting to negotiate with Iran, it should drop all sanctions.

“No country is ready to negotiate with a country that is putting a gun at its chest,” he said. He added, however, that the JCPOA itself was “not renegotiable.”

Since Trump withdrew from the nuclear accord, the restoration of heavy sanctions on Iran, including its oil industry, has exacerbated an economic crisis that has sent the currency plummeting.

Tensions between Iran and the U.S. have been on the rise. The U.S. has sent thousands of troops, an aircraft carrier, nuclear-capable B-52 bombers and advanced fighter jets to the Middle East, and fears are growing of a wider conflict after mysterious oil-tanker attacks near the Strait of Hormuz blamed on Iran, attacks by Iranian-backed rebels in Yemen on Saudi Arabia, and Iran’s downing of a U.S. military drone.

So far, the remaining parties to the nuclear deal — Russia, China, Germany, France, Britain and the European Union — have been unable to meet Tehran’s demands for enough economic assistance to offset the American sanctions.

They have said they remain committed to preserving it, however, insisting it is the best way to prevent Iran from obtaining a nuclear weapon — even though Iran says it is not interested in producing one.

Iran maintains it is justified in breaching the limitations because the U.S. already broke the deal with its unilateral withdrawal last year, and Ulyanov said its recent steps “are not a source of enthusiasm, but we treat them with understanding.”

In its statement to the IAEA board, the European Union urged Iran to return to compliance but also added it “deeply regrets the U.S. withdrawal and calls on all countries to refrain from taking any actions that impede the implementation of the JCPOA commitments.”

On the European side, French President Emmanuel Macron has taken a lead role in trying to save the deal, speaking Saturday with Iranian President Hassan Rouhani, and separately Monday with Trump.

Despite the overture, however, Shamkhani said Iran will not reverse its decision to increase uranium enrichment beyond the limits set by the accord until it achieves its “full rights” under the deal.

Iran’s official IRNA news agency reported that Shamkhani told Bonne the decision to increase enrichment is an “unchangeable strategy” and criticized European countries for their “lack of will” in providing relief from U.S. sanctions.

Rouhani, however, after meeting with Bonne said, “Iran has fully left the path open for diplomacy and negotiation.”

Rouhani told Bonne Iran seeks “full implementation” of commitments from all parties to the agreement, and “if signatories to the deal implement their commitments, Iran also will take new steps,” according to Rouhani’s website.

In other developments, Rouhani said Wednesday that Britain will face “repercussions” over the seizure of an Iranian supertanker last week that authorities in Gibraltar suspect was breaching European sanctions on oil shipments to Syria.

Rouhani called the seizure “mean and wrong” during a Cabinet meeting, IRNA reported.

“You are an initiator of insecurity and you will understand its repercussions,” he warned the British government, calling for the “full security” of international shipping lanes.

Iranian Foreign Minister Javad Zarif, meanwhile, denied the supertanker belonged to Iran, saying whoever owned the oil shipment and the vessel could pursue the case through legal avenues. Iran had earlier summoned the British ambassador over what it called the “illegal interception” of the ship.