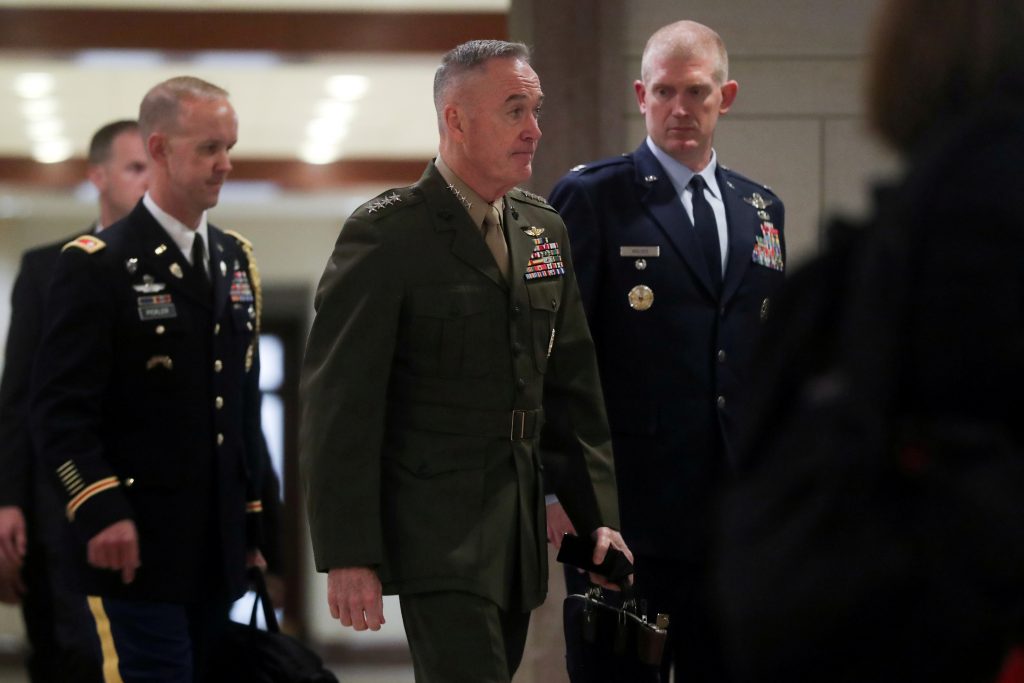 The United States hopes to enlist allies over the next two weeks or so in a military coalition to safeguard strategic waters off Iran and Yemen, where Washington blames Iran and Iran-aligned fighters for attacks, the top U.S. general said on Tuesday.

Under the plan, which has only been finalized in recent days, the United States would provide command ships and lead surveillance efforts for the military coalition. Allies would patrol waters near those U.S. command ships and escort commercial vessels with their nation’s flags.

Marine General Joseph Dunford, the chairman of the Joint Chiefs of Staff, articulated those details to reporters following meetings on Tuesday about it with acting U.S. Defense Secretary Mark Esper and Secretary of State Mike Pompeo.

“We’re engaging now with a number of countries to see if we can put together a coalition that would ensure freedom of navigation both in the Straits of Hormuz and the Bab al-Mandab,” Dunford said.

“And so I think probably over the next couple of weeks we’ll identify which nations have the political will to support that initiative and then we’ll work directly with the militaries to identify the specific capabilities that’ll support that.”

Iran has long threatened to close the Strait of Hormuz, through which almost a fifth of the world’s oil passes, if it was unable to export its oil, something U.S. President Donald Trump’s administration has sought as a way to pressure Tehran to renegotiate a deal on its nuclear program.

But the U.S proposal for an international coalition to safeguard shipping in the Strait, at the mouth of the Gulf, has been gaining momentum since attacks in May and June against oil tankers in Gulf waters. Last month, Iran shot down a U.S. drone near the Strait, prompting President Donald Trump to order retaliatory air strikes, only to call them off.

Although U.S. officials had publicly discussed plans to safeguard the Strait, Dunford’s disclosure that the coalition would also seek to bolster security in the Bab al-Mandab off Yemen appeared to be a new element.

The United States, as well as Saudi Arabia and the United Arab Emirates, have long fretted over attacks by Iran-aligned Houthi fighters in the narrow Bab al-Mandab waterway, which connects the Red Sea with the Gulf of Aden and the Arabian Sea.

Nearly 4 million barrels of oil are shipped daily through the Bab al-Mandab to Europe, the United states and Asia plus commercial goods.

Dunford said the United States would provide “command and control” ships but said the goal would be for other countries to provide vessels to patrol waters between those command ships.

The third part of the mission would involve coalition members escorting their countries’ commercial vessels.

“The expectation is that the actual patrolling and escorts would be done by others,” he said.

Dunford said the size of the campaign could be adjusted based on the number of countries that commit to it.

“This will be scalable, right? So, with a small number of contributors, we can have a small mission. And we’ll expand that as the number of nations that are willing to participate identify themselves,” he said.