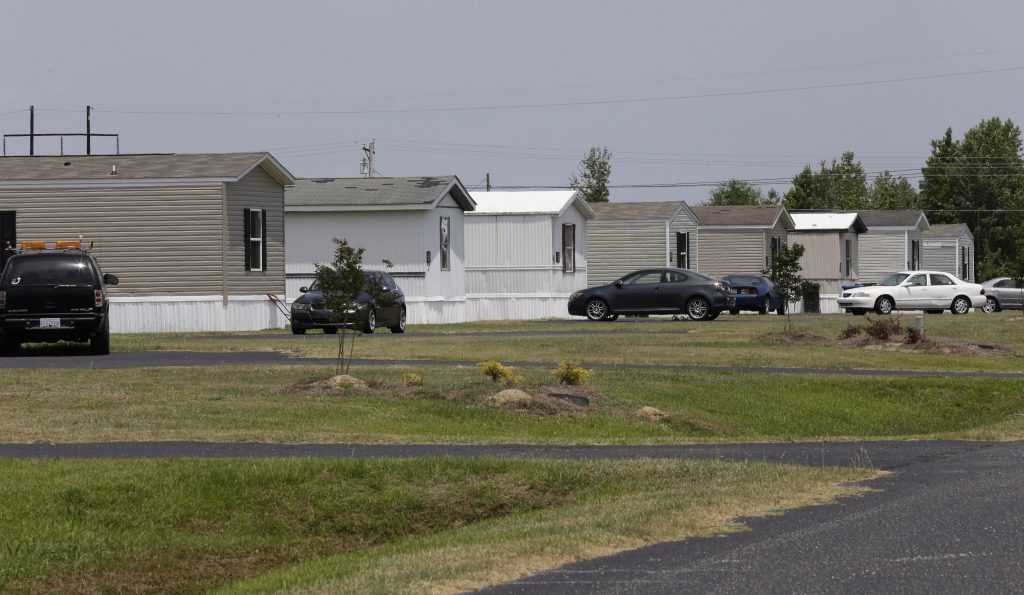 For eight years, James Lesane paid what he could for his mobile home lot rental every month — $150. But in February, five months after Hurricane Florence flooded the Lumberton region and shortly after Florida-based company Time Out Communities bought the park, his monthly lot rent more than tripled to $465.

With a fixed Social Security disability income of about $791 a month, Lesane said it’s impossible for him to pay that.

“If I had to pay $465 I couldn’t even pay the lights in this place,” he said, gesturing to the dim lighting inside his trailer, where trash bags covered windows to keep the trailer cool on a sweltering 100-degree day.

Time Out owns 23 properties in low-income Robeson County, many of which were bought in the past two years. At the same time, the county was one of the hardest-hit areas during hurricanes Matthew in 2016 and Florence in 2018.

All but two of the properties are in Lumberton, where residents say an affordable housing crisis caused by the hurricanes has been exacerbated by Time Out, a Fort Lauderdale, Florida-based company.

In an emailed statement, Time Out said rents were raised consistent with current market rates and that some of the additional revenue will go toward community improvement.

“In the aftermath of a disaster, folks are flooded, those land values are depressed, and if you have capital, there’s economic opportunity there,” Gunter said, adding that lower-income communities often live in disaster-prone areas such as flood plains.

“Folks may not be able to do repairs themselves, and if someone comes at them with the right offer, it can be tempting to take,” he said.

Gunter said many advocates are worried about the dynamic between mobile home owners who rent land in these parks and park owners, since older mobile homes often can’t be moved.

“People may not be able to move their homes, so you have incredible leverage over the people who rent that land,” he said.

Time Out owns more than 1,200 home unit rental lots in Lumberton, where residents live in a total of 1,416 mobile home units, according to the 2017 American Community Survey figures from the U.S. Census Bureau. In Lumberton 13.5% of the population lives in mobile homes, more than double the national average.

For many, mobile homes may be the only affordable option after the county was devastated by hurricanes. There is not enough rental stock to accommodate people who have been displaced by the hurricanes, placing a strain on affordable housing resources, according to Gunter.

Of 729 units in Lumberton’s public housing program, 187 were put “offline” from the hurricanes, and another 526 are occupied. For the remaining 16 units, Lumberton Housing Authority Director Sheila Oxendine said there are roughly 900 people on the waiting list.

The Robeson County Affordable Housing Coalition, formed in October 2018 after Hurricane Florence, has asked local officials to take action on Time Out’s rental increases and asked the town to set up a rental assistance and transitional housing fund. Coalition administrator Mac Legerton said the local government response has been limited.

“Their capacity to respond is limited due to the lack of laws and authority over a private business,” he said. “We’re forming an inter-agency task force to review what laws are needed in North Carolina and across the nation. … This business model is certainly unethical and immoral, and it should be illegal.”

Lumberton city officials could not be reached for comment.

For now, residents’ best hopes are to fight eviction with the help of Legal Aid of North Carolina and North Carolina Justice Center lawyers. Legal Aid has taken on 89 cases, 44 of which are still open. In some cases, lawyers have been able to show that the company gave improper notice, delaying eviction while residents search for a new place to live.

Since April, Shirley Pittman, 69, has been looking for a new place to put her home. She bought her mobile home in 1997 and doesn’t know if it’s in good enough condition to move. She was surprised when her monthly lot rent jumped from $210 to $465 earlier this year.

Pittman said she has continued to pay her old rent price. After living in Turner Park for over 20 years on a fixed Social Security disability income, she received a threat of eviction from Time Out in May.