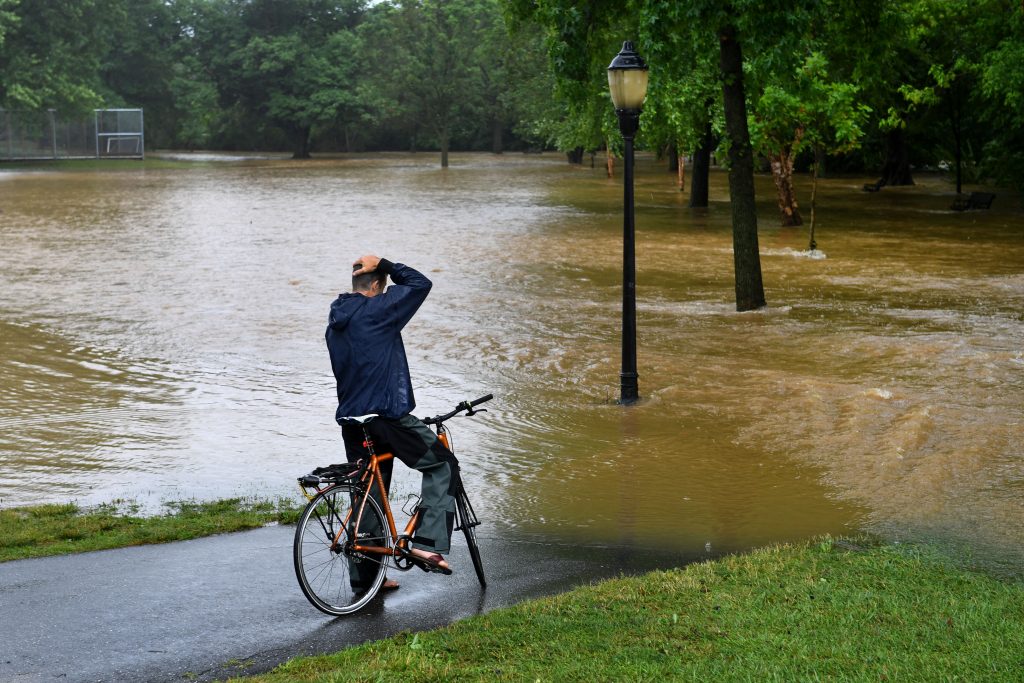 Four inches of heavy rain fell within an hour, creating the need for dozens of water rescues and leaving traffic at a standstill along major highways, some of which were temporarily closed.

Police and fire officials advised commuters to stay off roads until 11:15 a.m. while the area was under a flash flood warning. More than 8,000 utility customers were without power at one point.

Parts of the George Washington Parkway and the inner loops of the Capital Beltway near the American Legion Bridge were shut down for a time because of high water. The Beltway was backed up starting near Interstate 66.

Heavy downpours also caused delays in the area’s subway, known as Metro, and at one point, water poured from a ceiling in the Virginia Square station, causing trains to share a track.

By noon, Metro said service was returning to normal on all of its rail lines. But the Virginia Railway Express warned of possible delays during the afternoon commute.

In downtown Washington, the White House basement reported flooding. And there were reports of some ride-sharing services, including Uber and Lyft, imposing surge pricing, with some reports of charges of nearly $30 to go three blocks in downtown D.C.

At least a dozen commuters throughout the region had to be rescued or were able to swim to safety.

Some of the most severe flooding occurred along Canal Road, near the Fletcher’s Cove boathouse along the Potomac River. Several people were rescued from the rooftops of their cars, said Vito Maggiolo, a spokesman for D.C. Fire.

“The message here is that you don’t know how high the water is before you drive into it,” Maggiolo said. “So don’t drive into it.”

And, throughout the area, people crammed under bus shelters and pedestrians jumped over heavy waters at curbs.

In Montgomery County, Maryland, the flash floods were the worst the region had seen in years, according to Earl Stoddard, director of the county’s Office of Emergency Management.

The hardest-hit areas for flooding were Germantown and Gaithersburg, Maryland, along with parts of Bethesda and Potomac. In Fairfax County, Virginia, McLean and Reston were among the hardest hit, officials said.