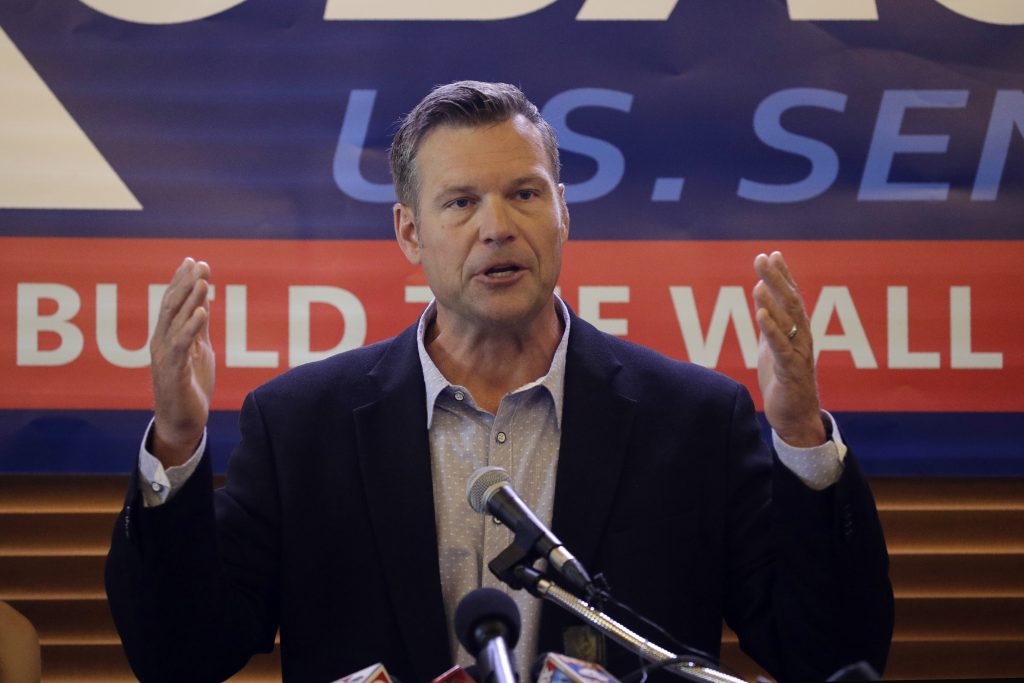 Kris Kobach, the former Kansas secretary of state who once headed President Donald Trump’s short-lived election integrity commission, on Monday launched a Republican bid for the Senate, pledging to “lead the charge” against illegal immigration and rising calls for socialism.

Speaking at an event in Leavenworth, Kansas, Kobach announced his bid after invoking the words of former president John F. Kennedy, saying it was a time for people to “ask what they can do for their country, and I believe our country needs us.”

“This is not a time for a senator who is Republican-lite,” he told the crowd as he stood in front of a banner with his new campaign logo and the words: “Build the Wall.”

Kobach has been eyeing the seat of retiring Sen. Pat Roberts (R-Kan.) for months, a prospect that has unnerved some fellow Republicans in Washington.

Last year, Kobach lost the governor’s race by five percentage points in heavily Republican Kansas, even with Trump’s endorsement, after a campaign that was criticized for its fundraising struggles and disorganization.

His entrance into the Senate race was immediately panned by the National Republican Senatorial Committee.

“Just last year Kris Kobach ran and lost to a Democrat,” said NRSC spokeswoman Joanna Rodriguez. “Now, he wants to do the same and simultaneously put President Trump’s presidency and Senate Majority at risk. We know Kansans won’t let that happen and we look forward to watching the Republican candidate they do choose win next fall.”

On Monday, Kobach, 53, filed a statement of candidacy hours before making his first public appearance as a candidate.

During his remarks, he cast himself as a steadfast ally of Trump, saying, “I will help the president make America great again.”

“There really hasn’t been anyone in the Senate pushing his agenda,” Kobach said, adding that GOP senators have been dragged “kicking and screaming” into supporting Trump.

Kobach recounted his work leading a group that raises private money to build barriers at the U.S.-Mexico border and pledged that he would help Trump achieve his long-promised goal of a border wall.

“We will build the wall faster and better if I’m elected,” Kobach said.

He also relayed that he had advised Trump on what he characterized as a need to add a controversial citizenship question to the 2020 Census.

Kobach also warned of what he called a socialist agenda being pushed by Democrats in Washington.

“America must never become a socialist country,” Kobach said. “You don’t build a country on free stuff. You build it on freedom, and that’s what made America great.”

Senate Majority Leader Mitch McConnell of Kentucky as well as other Republican leaders initially tried to court Secretary of State Mike Pompeo to run to succeed Roberts, who announced in January that he would not seek another term, opening a seat held by Republicans for nearly a century.

Earlier this year, Pompeo, a former congressman from Kansas, ruled out a Senate bid, saying he wanted “to be the secretary of state as long as President Trump gives me the opportunity to serve as America’s senior diplomat.”

In January 2018, Trump announced that he was disbanding the Presidential Advisory Commission on Election Integrity, which had been nominally chaired by Vice President Pence and led by Kobach, who aggressively sought to prosecute alleged voter fraud in Kansas during his tenure as secretary of state.

The 11-member commission met only twice amid lawsuits seeking to curb its authority and claims by Democrats that it was stacked to recommend voting restrictions favorable to the president’s party.

Trump had created the commission in response to his claim, for which he provided no proof, that he lost the popular vote to Democrat Hillary Clinton in 2016 because of millions of illegally cast ballots.

Kobach more recently has been involved in the controversy over the administration’s efforts to add a citizenship question to the 2020 Census.

Kobach met with Trump and some top aides to discuss the issue and sent a note to Commerce Secretary Wilbur Ross in July 2017 complaining that the lack of such a question “leads to the problem that aliens who do not actually ‘reside’ in the United States are still counted for congressional apportionment purposes.”

When summoned before a House panel last month, Kobach refused to answer several questions after the White House told him not to discuss his conversations with the president.