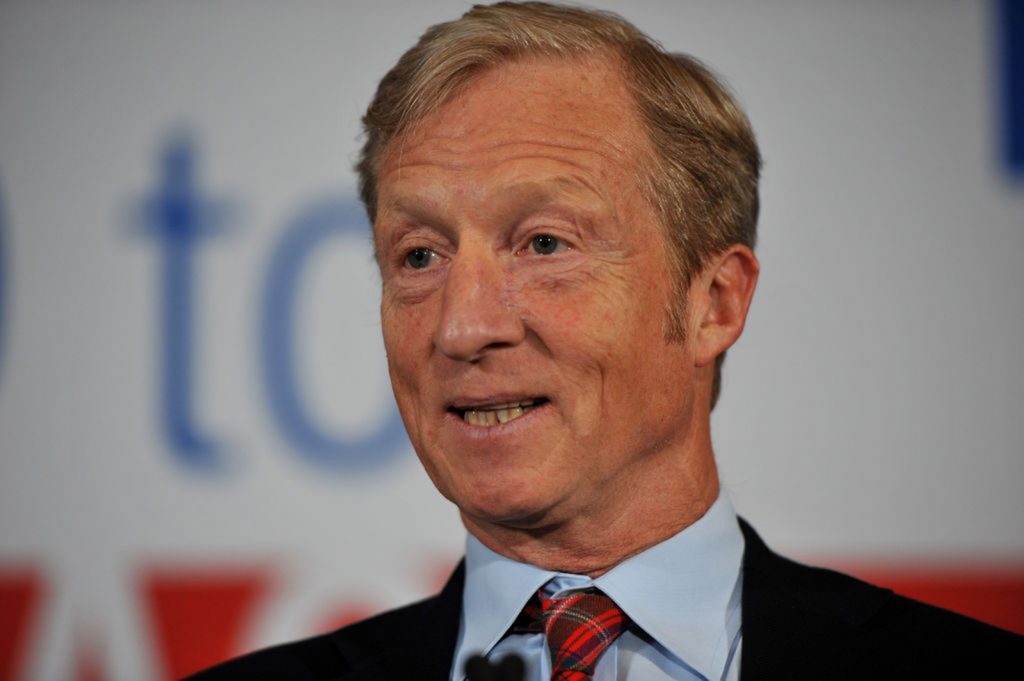 California billionaire and liberal activist Tom Steyer will announce this week that he plans to enter the already crowded field of candidates for the Democratic presidential nomination, according to a person close to him.

The decision by Steyer, one of the biggest donors to Democratic politicians, was unexpected. He had traveled to Iowa earlier in the year to announce he would not run but would instead focus on his large grass-roots campaign to impeach President Donald Trump.

But Steyer now appears to see an opening. The Democratic primary field remains unsettled. Former Vice President Joe Biden’s poor debate performance last month hurt him in polls and pierced the perception that his lead could be insurmountable.

The former hedge-fund manager has been telling friends and associates that he will run. Politico reported late Sunday night that Steyer revealed his plans in a conference call with staff members at his advocacy groups.

Steyer would enter the race a considerable long shot — up against candidates with far more name recognition and robust political resumes, including Biden, and Sens. Kamala Harris of California, Elizabeth Warren of Massachusetts and Bernie Sanders of Vermont.

The nearly two dozen other candidates in the field already have a jump on Steyer in fundraising and endorsements. Many of the California politicians who have benefited from his largess as a donor, for example, have already declared their support for others in the race.

The 2020 race is so well underway that as Steyer readies his late start, another Californian — Rep. Eric Swalwell — is already planning to drop out.

Beyond a large bank account, Steyer enters the race with one thing most of his rivals lack: a large and sturdy political infrastructure. Groups he has funded, NextGen and Need to Impeach, have been aggressively recruiting members and building a national network of activists pushing impeachment, action to combat climate change, universal healthcare and other progressive goals.

Need to Impeach has 8 million members on its email list, making it one of the country’s biggest advocacy groups, and Steyer holds regular calls for its members.

Before championing impeachment, Steyer was singularly focused on global warming. His multimillion-dollar investment in climate action earned him influential political allies and profiles in national magazines and newspapers. He steadily worked his way up the political ecosystem, starting with ballot measures in California, where he became the liberal counterweight to big oil companies and other interests working to oppose measures to reduce greenhouse-gas emissions. He ultimately expanded his efforts into a multi-state, multi-issue advocacy machine.

There was long speculation Steyer pursued his advocacy work with an eye toward running for office. The inroads his organization has made on college campuses rival those of Sanders. Steyer-affiliated groups have been canvassing and organizing young voters at universities for years, investing heavily in crucial swing states, especially Florida.

Political campaigns are large, complicated organizations, with many candidates faltering before getting them fully up and running. Steyer can enter the race with a turnkey operation, which is extremely unusual for a neophyte candidate.

But since entering the political fray in 2010, taking a lead in fighting off Big Oil’s ballot effort to undermine California’s landmark climate law, Steyer’s strength has always been working in the background to push change. As a speaker and a retail campaigner, he is unseasoned and untested.

He also enters the race at a time the party is distrustful of the kind of big money in politics that Steyer has represented over the last decade — even if the money has been used to push progressive policies. Campaign-finance reform is a marquee issue this race, and candidates, notably Warren, are demanding rivals accept only contributions from small donors.

Immediately after Steyer announces, the potency of his campaign will be put to the test as he tries to qualify for the fall debates. To qualify, candidates need a network of small donors that is at least 130,000 strong and the support of 2% or more voters in at least four independent polls. Many candidates who have been in the race for months are not expected to meet the threshold.

Whether Steyer meets it may reveal if the groundwork he has been laying over the years can actually propel his White House bid out of obscurity.