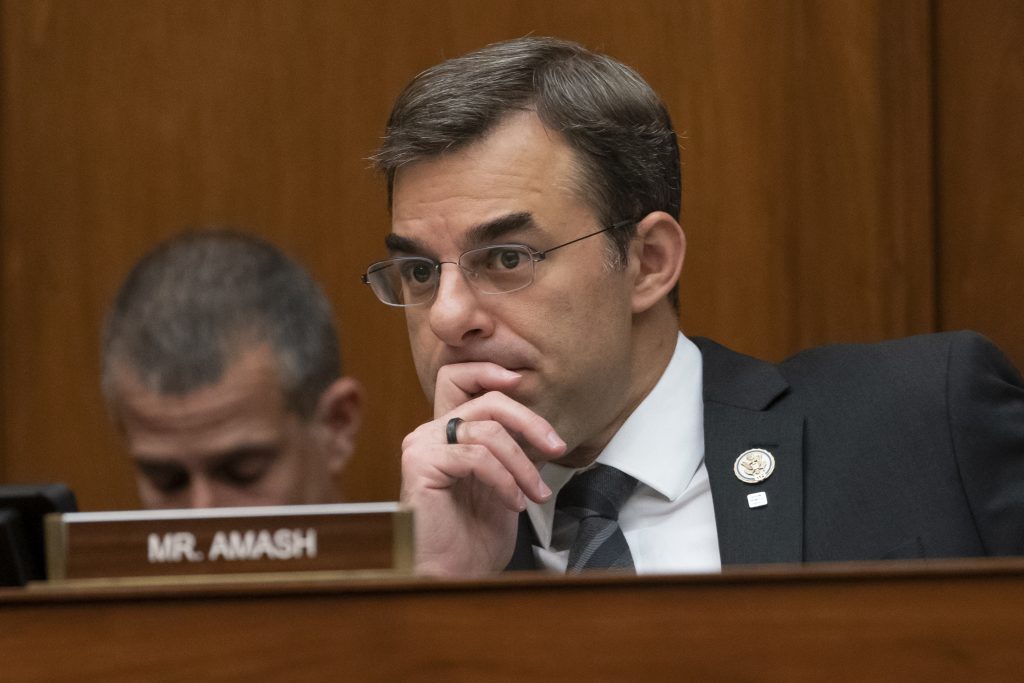 Rep. Justin Amash of Michigan, a conservative critic of President Donald Trump who recently left the Republican Party, would not rule out a 2020 presidential bid on Sunday, potentially complicating Trump’s path to re-election.

The prospect of an Amash insurgency, which would face significant hurdles, has unnerved some GOP strategists because it could pull libertarian and conservative support away from Trump, who won the 2016 election with razor-thin margins in six states, including Michigan.

“I still wouldn’t rule anything like that out,” Amash said in an interview with CNN’s “State of the Union,” when asked whether he would seek the White House as an independent or a third-party candidate. “I have to use my skills, my public influence, where it serves the country best.”

For the moment, Amash said he plans to run for re-election to the House next year as an independent. He said is he “very confident” that he will win his Grand Rapids-area seat again.

A presidential run is “something people talk about all the time,” Amash told CNN’s Jake Tapper, but it’s “not something on my radar right now.” He added that he does not have a timeline for a decision.

Amash insisted there is room for a fierce Trump critic like himself to rise nationally, despite the president’s perceived tight grip over conservatives. He said some Republican officials and friends have been “sending me text messages, calling me” to offer encouragement after his decision last week to leave the party, and did the same when he called for Trump’s impeachment in May.

But, he acknowledged, “they’re not saying it publicly, and it’s problematic for our country and the Republican Party – and the Democratic Party – when they’re not allowed to speak out.”

Other Republican House members, even those who have concerns about Trump, have declined to exit the GOP.

Rep. Will Hurd, R-Texas, who is friendly with Amash, told NBC’s “Meet the Press” on Sunday that Amash’s party switch is “unfortunate” and said “Justin believes the party is not big enough for his position and his ideas.” But Hurd said he is sticking with the GOP and working to expand its appeal with minority voters and independents.

Trump’s lone notable Republican primary challenger is former Massachusetts Gov. Bill Weld, whose campaign and moderate pitch has struggled to gain traction this summer. If Amash did launch a long-shot bid for the White House, he would not run in that GOP contest but as an independent or a candidate for the Libertarian Party.

Amash, 39, who was elected in the tea party wave of 2010, has embraced libertarian principles and repeatedly broke with his party on major issues before he challenged the president.

A Trump political adviser who was not authorized to speak publicly said Sunday that the White House is “keeping an eye” on Amash because he could end up being a “nuisance” but said the president’s camp is confident that GOP voters would dramatically reject such a candidacy.

When asked Sunday about whether that group has corroded congressional debate, Amash said its founding purpose was to “open up the process” of legislating, particularly among Republicans, and defended its efforts.

In a Washington Post op-ed published July 4, the Michigan congressman said the two-party system is in a “partisan death spiral.” Citing the warnings in George Washington’s farewell address, Amash wrote that Americans “have allowed government officials, under assertions of expediency and party unity, to ignore the most basic tenets of our constitutional order.”

Amash did not mention Trump by name in the op-ed, but his party switch came weeks after he posted tweets arguing that former special counsel Robert Mueller III documented “impeachable conduct” in his report on Trump’s campaign and administration and Russian interference in the 2016 election.

On Sunday, Amash told CNN that he believes only “15 percent” of lawmakers in both parties have read Mueller’s report.

A few hours after Amash’s declaration, Trump derided him in a tweet: “Great news for the Republican Party as one of the dumbest & most disloyal men in Congress is ‘quitting’ the Party. No Collusion, No Obstruction! Knew he couldn’t get the nomination to run again in the Great State of Michigan. Already being challenged for his seat. A total loser!”

House Minority Leader Kevin McCarthy, R-Calif., has dismissed Amash as an outlier among Republicans, citing a number of instances in which the congressman voted with Democrats.

“Justin Amash can determine his own future. But I think, on a philosophical basis, he’s probably in a different place than the majority of all of us,” McCarthy said last month.

“I don’t have a response to it,” Amash said Sunday of Trump’s scathing critique. “He thinks that people owe loyalty to him. But people are elected to Congress with an oath to support and defend the Constitution.”