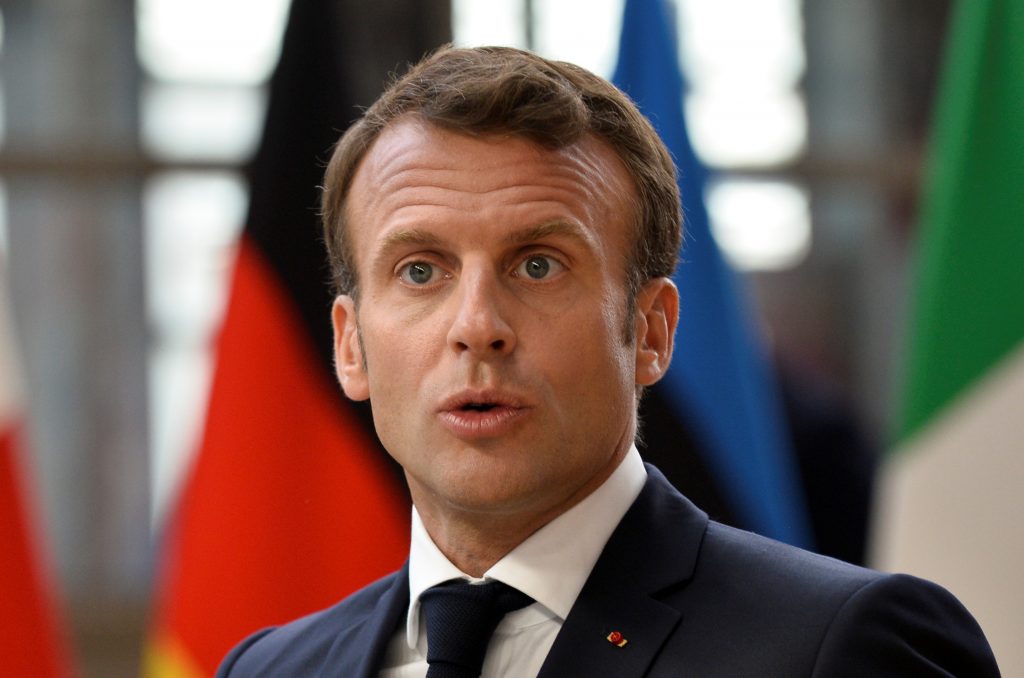 France warned Iran on Tuesday against carrying out any further measures that would put into question the 2015 nuclear deal, after Iran exceeded the limits of low enriched uranium under the terms of the agreement.

French President Emmanuel Macron said in a statement on Tuesday that he recalled “his attachment to the full respect of the 2015 nuclear accord and asks Iran to reverse without delay this excess, as well as to avoid all extra measures that would put into question its nuclear commitments.”

The statement added that Macron would take steps in coming days to ensure Iran met its obligations and continued to benefit from the economic advantages of the deal.

Macron’s statement follows Monday’s announcement that Iran surpassed the limit set on its stockpile of low-enriched uranium by its 2015 nuclear deal with world powers. The announcement, made by international inspectors and Tehran, marked Iran’s first major departure from the unraveling agreement a year after the U.S. unilaterally withdrew from the accord.

The announcement by Iran’s Foreign Minister Mohammad Javad Zarif and later confirmation by the U.N. nuclear watchdog puts new pressure on European nations trying to save the deal amid President Donald Trump’s campaign targeting Tehran. Iran separately threatened to raise its uranium enrichment closer to weapons-grade levels on July 7 if Europe fails to offer it a new deal.

It also further heightens tensions across the wider Middle East in the wake of Iran recently shooting down a U.S. military surveillance drone, mysterious attacks on oil tankers that America and the Israelis blame on Tehran, and bomb-laden drone assaults by Yemen’s Iranian-backed rebels targeting Saudi Arabia. Those rebels claimed a new attack late Monday on Saudi Arabia’s Abha airport that the kingdom said wounded nine people, including one Indian.

The European Union urged Iran to reverse course and Prime Minister Binyamin Netanyahu called the action “a significant step toward making a nuclear weapon.” Iran long has insisted its nuclear program is for peaceful purposes, despite Western fears about it.

At the White House, Trump told reporters Iran was “playing with fire,” and U.S. Secretary of State Mike Pompeo called on the international community to require Iran to suspend all enrichment, even at levels allowed under the nuclear deal.

“The Iranian regime, armed with nuclear weapons, would pose an even greater danger to the region and to the world,” Pompeo said in a statement.

Though Trump pulled back from airstrikes targeting Iran after the U.S. drone was shot down, Washington has rushed an aircraft carrier strike group, nuclear-capable B-52 bombers and thousands of additional troops to the region. That raised fears that a miscalculation or further incidents could push the two sides into an armed conflict, some 40 years after the Islamic Revolution and the takeover of the U.S. Embassy in Tehran.

Speaking to journalists in Tehran, Zarif acknowledged that Iran had broken through the limit set by the accord.

“We had previously announced this and we have said it transparently what we are going to do,” Zarif said. “We are going to act according to what we have announced and we consider it our right reserved in the nuclear deal.”

The U.N. nuclear watchdog, the International Atomic Energy Agency, later said its director general had informed officials that it verified Iran had broken through the limit.

Under terms of the nuclear deal, Iran agreed to have less than 300 kilograms (661 pounds) of uranium enriched to a maximum of 3.67%. Previously, Iran enriched as high as 20%, which is a short technical step away from reaching weapons-grade levels. It also held up to 10,000 kilograms (22,046 pounds) of the higher-enriched uranium.

Neither Zarif nor the U.N. agency said how much uranium Iran now had on hand. Last week, an Iranian official in Vienna said that Tehran was 2.8 kilograms away from the limit. Iran previously announced it had quadrupled its production of low-enriched uranium, which at under 3.67% is enough to power a nuclear reactor to create electricity, but is far below weapons-grade levels.

However, Iran could have chosen to mix the low-enriched uranium with raw uranium, diluting it and bringing it down under the cap. Pushing past the limit served as a notice to Europe, Zarif said.

The “actions of the Europeans have not been enough so the Islamic Republic will move ahead with its plans as it has previously announced,” Zarif said. “We are in the process of doing our first phase of actions both on increasing our stockpile of enriched uranium as well as our heavy water reserves.”

Breaking the stockpile limit by itself doesn’t radically change the one year that experts say Iran would need to have enough material for an atomic bomb, if it chooses to pursue one.

But by coupling an increasing stockpile with higher enrichment, it begins to close that one-year window and hamper any diplomatic efforts at saving the accord.

At the time of the 2015 deal, which was agreed to by Iran, the United States, China, Russia, Germany, France and Britain, experts believed Iran needed anywhere from several weeks to three months to have enough material for a bomb.

Zarif stressed the country remained on track to raise its enrichment if Europe did not take any additional steps toward saving the accord.

“The next step is about the 3.67% limitation, which we will implement too,” he warned.

“The policy changed from ‘wait out Trump’ to ‘hit back at Trump.’ That’s a big deal,” said Cliff Kupchan, a chairman at the Eurasia Group and longtime Iran watcher. “I don’t think either side wants war, but both sides do want leverage. We’re in for a rough ride.”

Russia’s Deputy Foreign Minister Sergei Ryabkov noted that Iran had warned it was going to exceed the limit set by the deal and emphasized that Tehran’s move followed U.S. pressure.

“It didn’t come as a surprise, Iran long has warned about it,” Ryabkov said.

“Exceeding the 300-kilogram limit causes regret, but shouldn’t be overdramatized. It must be seen as a natural result of the preceding events,” Ryabkov said. “Iran has faced an unprecedented and unthinkable U.S. sanction pressure, effectively meaning a total oil embargo, an attempt to strangle a sovereign state.”