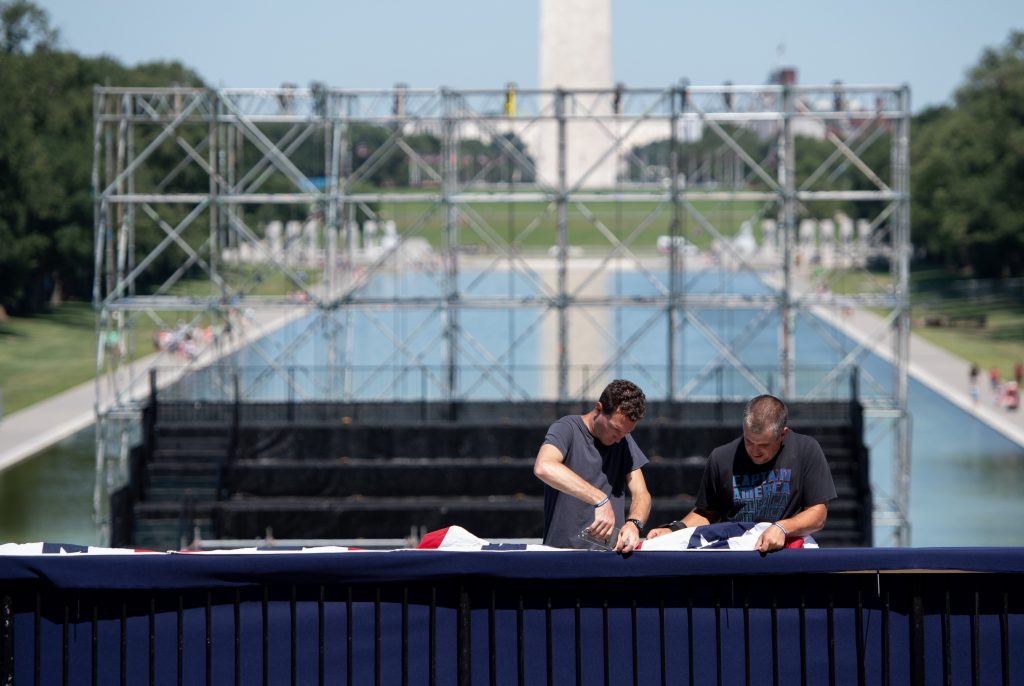 But in recent days, another issue has competed for Smith’s attention: how to satisfy President Trump’s request to station tanks or other armored military vehicles on the Mall for his planned Fourth of July address to the nation.

The ongoing negotiations over whether to use massive military hardware, such as Abrams tanks or Bradley Fighting Vehicles, as a prop for Trump’s “Salute to America” is just one of many unfinished details when it comes to the celebration planned for Thursday, according to several people briefed on the plan, who requested anonymity to speak frankly.

White House officials intend to give out tickets for attendees to sit in a VIP section and watch President Trump’s speech, but did not develop a distribution system before much of the staff left for Asia last week, according to two administration officials. Officials are also still working on other key crowd management details, such as how to get attendees through magnetometers in an orderly fashion.

Traditionally, major gatherings on the Mall, including inauguration festivities and a jubilee commemorating the start of a new millennium, have featured a designated event producer. But in this case, the producer is the president himself.

Trump has demonstrated an unusual level of interest in this year’s Independence Day observance, according to three senior administration officials. He has received regular briefings about it from Interior Secretary David Bernhardt, according to the people briefed on the plan, and has weighed in on everything from how the pyrotechnics should be launched to how the military should be honored.

As a result, the administration has organized a far more ambitious celebration than was originally planned, at a yet-to-be specified additional cost to taxpayers. Two major fireworks firms have donated a pyrotechnic show valued at $750,000, for example, but the Park Service will have to pay employees overtime to clean up the remnants of that display. The fireworks have also been moved to a new location in West Potomac Park at Trump’s urging.

President Trump has also spurred the use of military aircraft for a flyover, including one of the jetliners used as Air Force One. In addition, the Navy’s Blue Angels were supposed to have a break between a performance in Davenport, Iowa on June 30 and one in Kansas City, Missouri, on July 6, but will now be flying in D.C. on the 4th.

Trump is also is interested in other “surprise” military flyovers, including one featuring an F-35, according to a government official who spoke on the condition of anonymity because the move has yet to be announced.

About 300 service members, primarily from bands and drill teams, are slated to participate as well.

The White House declined to comment on the ongoing plans.

Asked about the discussions about using armored vehicles and the projected overall costs of the event, Interior officials also declined to publicly comment. They noted that the department had issued an updated itinerary announcing the timing of the president’s speech, as well as additional details on the military performance and 35-minute fireworks display.

“This is going to be a fantastic Fourth of July with increased access across the National Mall for the public to enjoy music, flyovers, a spectacular fireworks display, and an address by our Commander-in-Chief,” Bernhardt said in the news release.

Trump has been fixated since early in his term with putting on a military-heavy parade or other celebration modeled on France’s Bastille Day celebration, which he attended in Paris in 2017. Trump angrily backed off plans for a grand Veterans Day parade down Pennsylvania Avenue in 2018 amid concerns from District officials over costs and potential road damage from military vehicles.

The type of armored tactical vehicles under consideration for this year’s Fourth of July celebration can weigh 60 tons or more, and some, such as Abrams tanks, have tracks that can be particularly damaging.

The Pentagon is aware of Trump’s interest in having armored vehicles involved and is weighing having static displays of them during the celebration, defense officials said.

Advocates for the Park Service as well as some Democratic lawmakers and D.C. officials have questioned why the federal government is devoting resources to the event given constrained budgets and other demands.

The D.C. Council reiterated its opposition to driving tanks on the city’s streets, tweeting,”We have said it before, and we’ll say it again: Tanks, but no tanks.” In the tweet, the council posted the image of a March 8, 2018, memo in which the Pentagon cautioned against using tanks in the military parade Trump had envisioned, saying, “Consideration must be given to minimize damage to local infrastructure.”