National On Edge: 2020 Dems Face Prospect of Being Cut From Debates
Politics 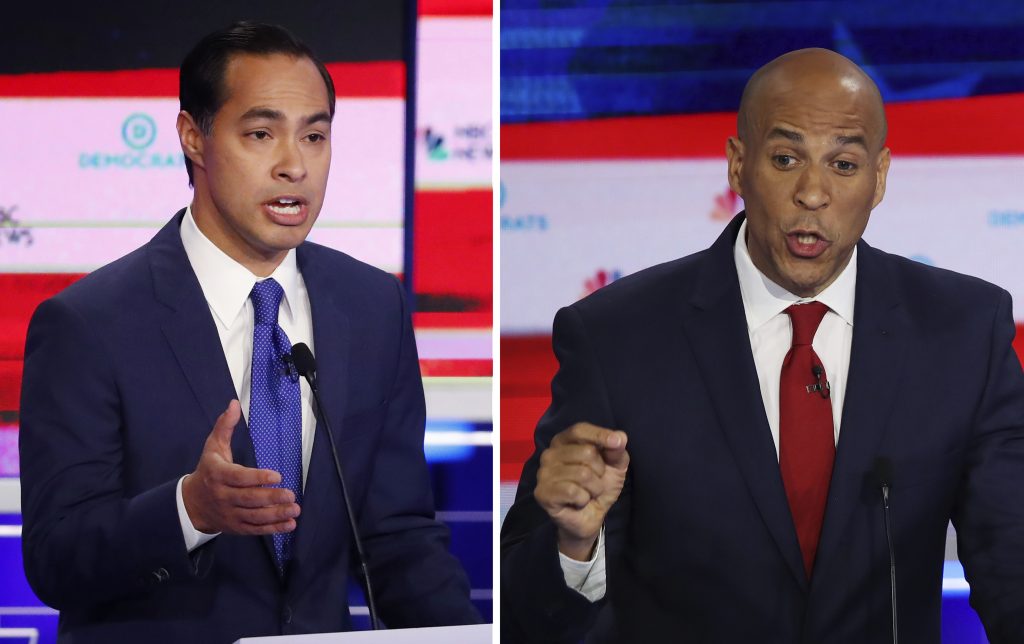 The largest presidential field in modern Democratic politics could quickly shrink as more than half of the contenders are in real danger of failing to meet tougher requirements to participate in the fall round of debates.

Short on support and money and bound by tough party rules, once soaring politicians may soon be seen as also-rans. They include Julian Castro, who is seeking to capitalize on his strong debate performance last week; Kirsten Gillibrand; and Cory Booker, who rose to stardom as the energetic mayor of Newark, New Jersey.

A difficult period lies ahead as the party begins to sort through its expansive roster of candidates. The process will help Democrats zero in on someone to challenge President Donald Trump. But it is also forcing candidates to burn through cash to stay competitive and could result in a field that’s older, whiter and more male — an uncomfortable development for a party that says it prizes diversity.

Of the 20 candidates who qualified for the first round of debates in June and July, just six are sure to appear in the September-October round, when the Democratic National Committee requires participants to hit 2% in multiple polls and 130,000 individual donors. Though many campaigns are worried, DNC Chairman Tom Perez has resisted pressure to relax the requirements.

“We put our rules out for debate participation months earlier because we wanted to give people time,” Perez said in an interview. “We want to be fair to everyone.”

There’s still time for struggling candidates to recover. All 20 contenders who appeared on the debate stage last week will return for the late July debates. And, for now, only a fraction of voters are paying close attention to the unfolding Democratic contest.

But failing to qualify for the September-October debates could be lethal to any candidate, regardless of whether they formally drop out of the race.

Currently, the only locks for the fall debates are former Vice President Joe Biden, Vermont Sen. Bernie Sanders, Massachusetts Sen. Elizabeth Warren, California Sen. Kamala Harris and South Bend, Indiana, Mayor Pete Buttigieg. Former Texas Rep. Beto O’Rourke is likely to qualify, but after an underwhelming debate performance last week, even he is not guaranteed to make the polling threshold. Only polls taken between June 28 and Aug. 28 will count.

The governors in the contest and no less than nine current or former members of Congress have yet to qualify. The bubble candidates include Booker, the New Jersey senator and the only black man in the race; and Castro, the only White House hopeful of Hispanic heritage. Four of the six female contenders — including Sens. Amy Klobuchar of Minnesota and Gillibrand of New York — have yet to meet the donor or polling thresholds.

The do-or-die nature of making the debates has forced many second-tier candidates to dump money into online advertising at an unprecedented rate to generate new donors. Some strategists concede campaigns are spending upward of $40 on average for every email address of a prospective small-dollar donor, an unsustainable ratio that has forced cutbacks on hiring, candidate travel and organizing support on the ground in key states.

“No one wants to give anyone money to buy donors,” said Robert Wolf, a former Obama economic adviser.

The donor requirements have forced candidates to prioritize spending on online ads targeting areas with a large number of possible donors, rather than communicating with potential supporters in the states that matter most in the primary. The overwhelming majority of social media ads target Democratic fundraising hubs or the candidates’ home states, where they are best known. California tops the list, followed by New York, Texas, Florida and Washington state.

And the message behind many online ads has been focused on qualifying for debates — not “persuasion” ads that highlight Democrats’ plans or Trump’s weaknesses.

Online ads aimed at boosting the number of small-dollar donors dominated digital spending between the end of March and late June, according to an Associated Press analysis of fundraising records and online ad data compiled by the Democratic digital firm Bully Pulpit Interactive. Candidates spent more money — about $2.8 million — during that time on debate-themed ads than on any other subject, including health care, climate change, the economy and Trump, the data shows.

For some of the lesser-known candidates, the spending soaked up a major chunk of their early fundraising haul.

The $416,000 that Castro spent on debate-themed social media and internet ads amounted to about 37% of what he raised during the year’s first quarter. Washington Gov. Jay Inslee spent about 17% of the money he’s reported raising since getting in the race, according to the AP’s analysis.

The candidates on the edge of being cut are expressing growing alarm to their supporters.

Booker noted in a weekend fundraising message that he’s more than 30,000 donors away from the threshold. His campaign insists he will hit polling and fundraising marks, but his allies are concerned by what they see as an inherent bias among online donors who traditionally skew white.

“The pool of people who have discretionary income to be donors is overwhelmingly, if not disproportionately, white,” said Phillips, whose Dream United super PAC supports Booker.

Since the debate, Castro’s campaign peppered social media with donation requests and sold T-shirts featuring one of his closing lines: “Adios Trump.” In the two days immediately after the debate, they blasted out at least 10 emails asking for money to help qualify for the next round.

His campaign said it had seen a “four-digit percentage spike” in fundraising on Wednesday night and Castro himself said it was “safe to say … we probably had our best fundraising night of the campaign.”

Notably, his campaign did not say he had qualified for the fall debates.