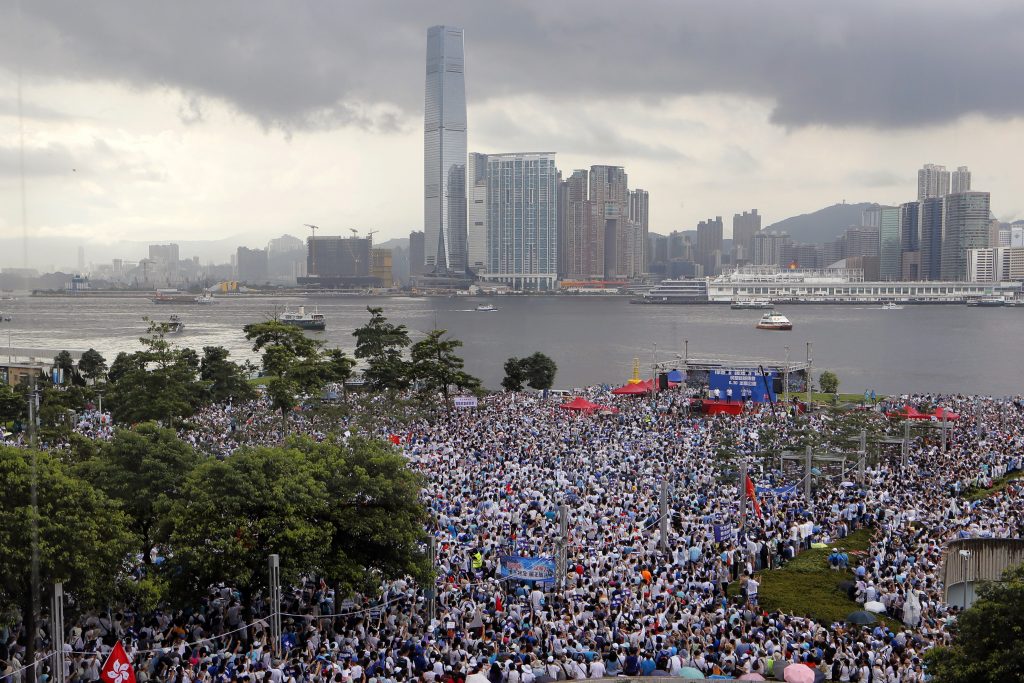 Hong Kong authorities called for calm ahead of Monday’s annual pro-democracy march, with widespread anger over an extradition bill expected to lead to large crowds after high-profile protests this month against the proposal.

More than a million people have taken to the streets at times over the past three weeks to vent their anger and frustration at Hong Kong‘s Beijing-backed leader Carrie Lam, posing the greatest popular challenge to Chinese leader Xi Jinping since he came to power in 2012.

China is also grappling with a trade war with Washington, a faltering economy and South China Sea tensions.

Monday’s anniversary of the handover of the former British colony to Beijing in 1997 has been marked in recent years by deepening despondency about what many Hong Kong residents see as a relentless march towards mainland control.

This came to a head on June 12 when protests against a proposal that would allow people to be sent to mainland China for trial led to police firing rubber bullets and tear gas near the heart of Hong Kong‘s financial center, sending plumes of smoke billowing among some of the world’s tallest skyscrapers.

Hong Kong‘s Chief Secretary Matthew Cheung appealed for calm ahead of Monday’s rally and said in his blog on Sunday that the government has learned from its mistakes.

“It is imperative to restore social order and tranquility as soon as possible, stabilize the business environment and bring Hong Kong back on track,” Cheung said.

Lam, who has apologized for the upheaval, has not been seen in public since June 18, suspended the extradition bill after some of Hong Kong‘s biggest and most violent protests in decades, but stopped short of demands to scrap it.

Activists are also demanding the government drop all charges against those arrested during the protests, charge police with excessive use of force and stop referring to the demonstrations as a riot, which can bring a heavier jail sentence.

But in a show of support for the police, thousands gathered in heavy rain and sweltering heat, some waving the Chinese flag, and observed a moment of silence. The police estimated 53,000 attended Sunday’s rally.

“We can’t tolerate those who … attack the rule of law, attack LegCo, attack the government,” Tam, who is a member of China’s National People’s Congress, said.

“Some have been taking directions from foreign countries.”

Organizers of Monday’s anniversary march say they are confident that anger over the city government’s failure to withdraw the extradition bill will fuel numbers.

The bill has reignited a protest movement that had lost steam after pro-democracy demonstrations in 2014 failed to wrestle concessions from Beijing and led to hundreds of arrests.

Hong Kong returned to Chinese rule on July 1, 1997, under a “one country, two systems” formula that allows freedoms not enjoyed in mainland China, including freedom of protest and a much-cherished independent judiciary.

Opponents of the extradition bill see it as a threat to the rule of law and fear it would put them at the mercy of China’s justice system, where human rights are not guaranteed.

Britain said in a statement on Sunday it will closely monitor events and continue to press the Chinese government to respect the terms under which Hong Kong was handed over.

Foreign Secretary Jeremy Hunt said that recent protests made it even more important to reiterate that Britain’s commitment to the Sino-British Joint Declaration was unwavering.

“It is a legally-binding treaty and remains as valid today as it did when it was signed and ratified over thirty years ago,” Hunt said.

After promises that post-handover Hong Kong would enjoy autonomy, Beijing’s squeeze has fueled resentment and in 2014 sparked protests that paralyzed parts of the city for 79 days.

The failure of those protests to wrestle concessions on democracy, coupled with prosecutions of at least 100 protesters, most of them young, had discouraged many activists from going back to the streets – until recent weeks.

The turnout at the handover protest in 2018 was one of the lowest ever after the disqualification of pro-democracy legislators and the jailing of some of the most prominent activists.

Organizers said about 50,000 people rallied last year, while police put the number at 9,800 at its peak.