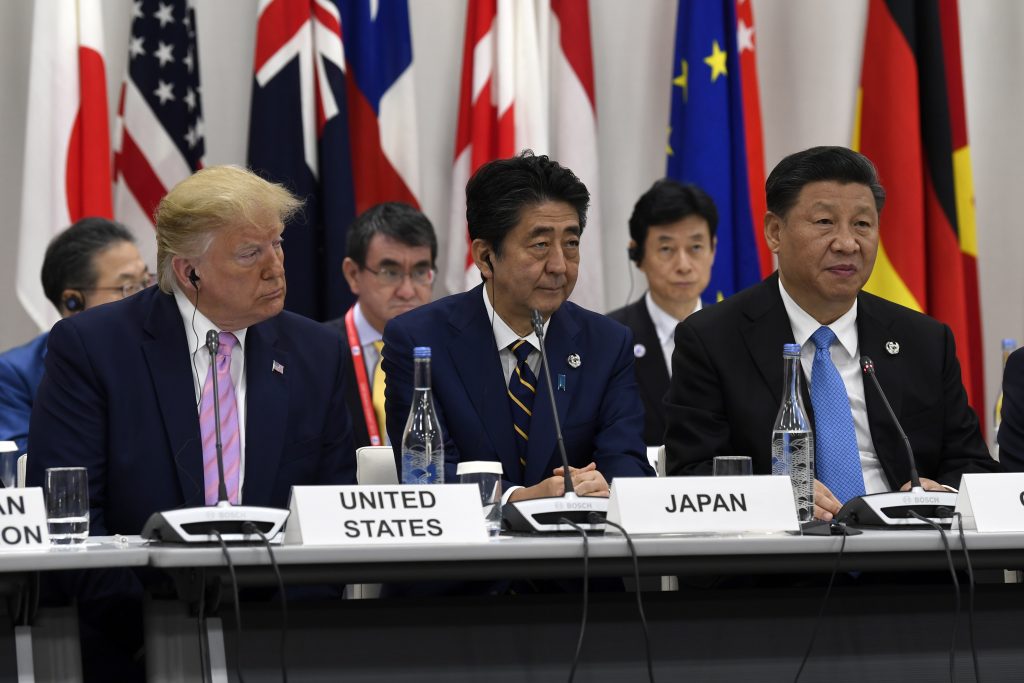 World leaders attending a Group of 20 summit in Japan that began Friday are clashing over values that have served for decades as the foundation of their cooperation as they face calls to fend off threats to economic growth.

“A free and open economy is the basis for peace and prosperity,” Japanese Prime Minister Shinzo Abe told his counterparts in opening the two-day G-20 meeting, which comes as leaders grapple with profound tensions over trade, globalization and the collapsing nuclear deal with Iran.

While groups like the G-20 endeavor to forge consensus on broad policy approaches and geopolitical issues, they also are divided on an array of issues.

Defying Chinese warnings not to bring up the issue of recent protests in Hong Kong, Abe told Chinese President Xi Jinping it was important for “a free and open Hong Kong to prosper under ‘one country, two systems’ policy,” Japanese officials said, referring to the arrangement for the former British colony’s autonomy when China took control in 1997.

They said Abe reminded Xi of the importance of guaranteeing freedom, human rights, the “rule of law” and other universal values in raising concern over proposed Hong Kong legislation that would allow some criminal suspects to be extradited for trial in mainland China. The bill, now shelved, prompted protests by hundreds of thousands of Hong Kong residents and minor demonstrations elsewhere in Asia, including Osaka.

Xi is not the only leader facing a pushback from his Western counterparts.

European Union Council President Donald Tusk blasted Russian President Vladimir Putin for saying in an interview with the Financial Times newspaper that liberalism was “obsolete” and conflicts with the “overwhelming majority” in many countries.

“We are here as Europeans also to firmly and unequivocally defend and promote liberal democracy,” Tusk told reporters. “What I find really obsolete are: authoritarianism, personality cults, the rule of oligarchs. Even if sometimes they may seem effective.”

In the interview, Putin praised President Donald Trump for his efforts to try to stop the flow of migrants and drugs from Mexico and said that liberalism “presupposes that nothing needs to be done. That migrants can kill, plunder … with impunity because their rights as migrants have to be protected.”

Trump has at times found himself at odds with other leaders in such international events, particularly on issues such as Iran, climate change and trade.

The schisms can vary.

Putin, Xi and Indian Prime Minister Narendra Modi met and agreed on the need to rely on international law, respect national sovereignty and refrain from interference in the internal affairs of other nations, Putin said.

Such statements are a swipe at Trump’s “America First” approach in rejecting multilateral initiatives, but also draw a line against criticism of authoritarian governments like China’s and Russia’s.

China has often sought support for defending global trade agreements against Trump’s “America First” stance in gatherings like the G-20.

A planned meeting between Trump and Xi on Saturday has raised hopes the world’s two largest economies could attain a rapprochement in their festering dispute over technology and China’s chronic trade surplus.

The two sides have levied billions of dollars’ worth of tariffs on each other’s products. In Beijing, officials urged the U.S. side to meet China halfway in resolving the standoff.

In a meeting with Brazilian President Jair Bolsonaro, Trump said he had not promised to hold back on imposing new tariffs on China.

“I think it’ll be productive,” Trump said of his meeting with Xi. “We’ll see what happens tomorrow. It’ll be a very exciting day I’m sure,” he said. “It’s going to come out hopefully well for both countries.”

U.S. Trade Representative Robert Lighthizer and Commerce Secretary Wilbur Ross accompanied Trump to Osaka, suggesting potential for some movement after 11 rounds of talks with China stalled in May.

But while prospects for detente in the trade war are in the spotlight, many participants prefer a broader approach to tackling global crises.

“I am deeply concerned over the current global economic situation. The world is paying attention to the direction we, the G-20 leaders, are moving toward,” Abe said. “We need to send a strong message, which is to support and strengthen a free, fair and indiscriminating trade system.”

Jean-Claude Juncker, president of the EU Commission, told the G-20 leaders their work was essential for building confidence to keep the world economy growing.

Abe has sought to make the Osaka summit a landmark for progress on environmental issues, including climate change, on cooperation in developing new rules for the “digital economy,” such as devising fair ways to tax companies like Google and Facebook, and on strengthening precautions against abuse of technologies such as cybercurrencies to fund terrorism and other types of internet-related crimes.

On the rising tensions between Iran and the U.S., U.N. Secretary-General Antonio Guterres said the world can’t afford the conflict and it is “essential to deescalate the situation” and avoid confrontation. Iran is poised to soon surpass a key uranium stockpile threshold, threatening the nuclear accord it reached with world powers in 2015.

Iran’s moves come after Trump announced in May 2018 that he was pulling the U.S. out of the deal and re-imposing economic sanctions on Tehran.

The leaders of Brazil, Russia, India, China and South Africa (BRICS), in a meeting on the G-20 sidelines, called for joint efforts to stabilize international trade and oppose protectionism.

Putin, whose country faces an array of U.S. and EU sanctions, said at the meeting that “international trade has suffered from protectionism, politically motivated restrictions and barriers.” He also emphasized the need for the BRICS nations to take coordinated action to help block sources of funding for terrorist groups.