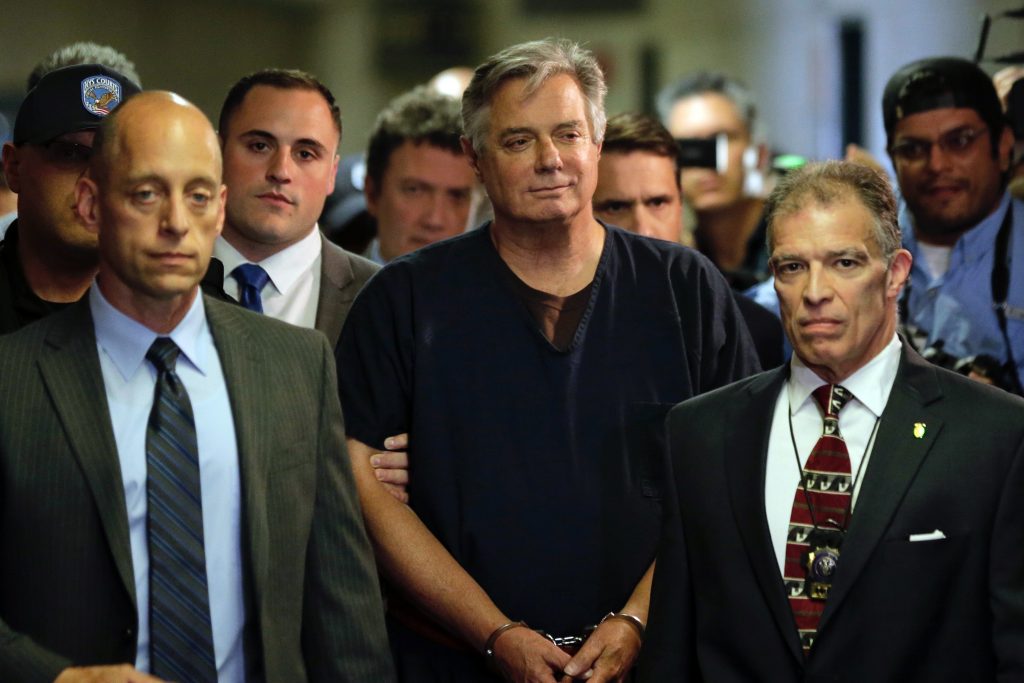 Paul Manafort, President Donald Trump’s former campaign chairman who is serving a seven-and-a-half-year prison term for federal bank and tax fraud convictions, pleaded not guilty in New York state court Thursday to charges that could not be wiped away with a pardon.

Shuffling down a crowded, sweltering hallway, Manafort entered the courtroom in handcuffs, accompanied by officers from the court’s special response team. He displayed a forced smile as he made his way past the media, his expression remaining unchanged as someone waiting to enter the courtroom yelled, “Traitor!” He ignored reporters’ shouted questions.

After being helped to his feet by his lawyers, Manafort walked to the front of the courtroom. He was presented with the charges against him and offered an unemotional plea of “not guilty.”

A photographer had earlier caught Manafort arriving to the courthouse wearing a blue jumpsuit and white sneakers, his hair disheveled. The former top Trump campaign adviser was recently moved to the same federal detention center in Manhattan that houses infamous drug lord Joaquín “El Chapo” Guzmán so Manafort could answer the state charges. He had been serving his federal sentence at a facility in Pennsylvania.

Manafort was a key figure in Special Counsel Robert Mueller’s investigation into whether the Trump campaign coordinated with Russia to influence the election, drawing particular attention for his business dealings with pro-Russia political figures in Ukraine. Manafort was ultimately charged and convicted of bank and tax fraud related to that work — first after a federal trial in Virginia, and then, separately, when he pled guilty in federal court in Washington, D.C.

Prosecutors, though, alleged that Manafort continued to lie to them even after agreeing to cooperate, and political observers wondered whether he might be trying to stay in President Trump’s good graces in hopes of earning a pardon. President Trump has said such a move is not on his mind but added that he feels “badly” for his former campaign chairman.

In May, a state grand jury in New York indicted Manafort on mortgage fraud charges stemming from largely the same conduct at issue in his federal trials. Manhattan District Attorney Cyrus Vance said Manafort’s misdeeds “strike at the heart of New York’s sovereign interests, including the integrity of our residential mortgage market.” His attorney has argued in correspondence with law enforcement officials that the case violates double-jeopardy laws.

The charges could be significant because President Trump is not able to issue a pardon on state offenses.

Attorneys for Manafort hoped to obtain a blanket waiver at the proceeding Thursday for Manafort to decline to attend any pretrial hearings, but — at the state’s request — Judge Maxwell Wiley said he would evaluate each hearing individually. Wiley told Manafort that, should the case go to trial, he had the right to be in the room but would be tried in absentia if necessary.

“My guess is, if the case goes to trial, you’ll be here,” the judge said to Manafort.

The next hearing in the case is scheduled for Oct. 9.

As Manafort exited the courtroom, someone in the audience again yelled at him: “People power, sir.”