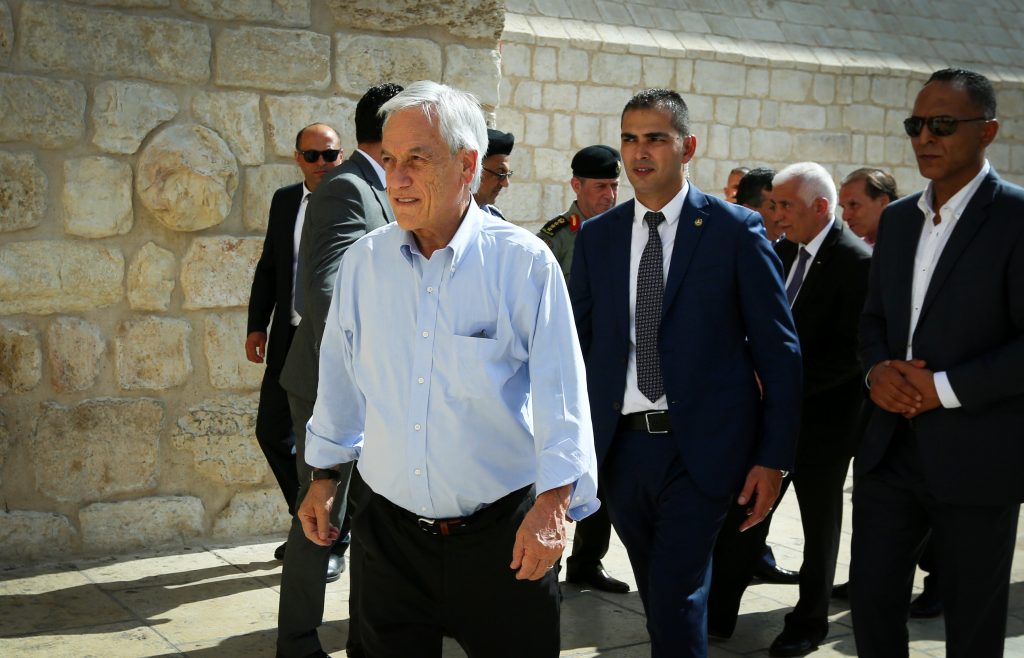 Chilean President Sebastián Piñera apologized on Wednesday for a diplomatic faux pas the day before in which he visited Har Habayis accompanied by Palestinian officials.

The visit provoked a protest from the Israeli Foreign Ministry, which said the presence of Palestinian officials constituted a breach of Israel’s sovereignty over the eastern part of the capital.

Foreign Minister Yisrael Katz said that the government “takes seriously any infringement of Israeli sovereignty on the Temple Mount, especially one that violates an agreed-upon procedure.”

According to the Ministry, the two countries had agreed beforehand that Piñera would not be accompanied by any Palestinian officials.

“We must distinguish between absolute freedom of worship that Israel safeguards” and “ensuring that our sovereignty over the Temple Mount is not harmed,” the Ministry’s statement added.

An official source in the Chilean delegation tried to excuse the matter by explaining that the visit was a “private” one, in which “formally, only the delegation from Chile participated.”

However, Piñera himself subsequently apologized to President Reuven Rivlin in a routine meeting on Wednesday. Rivlin himself made no mention of the incident.

During their meeting, Rivlin asked Piñera to speak with the Palestinian Authority about supporting the U.S. economic plan being presented in Bahrain. The Chilean president is scheduled to meet with PA officials on Thursday before leaving the country.

“The gaps between us and the Palestinians are great, but we must begin with small steps of cooperation, and not to boycott or refuse plans that will improve our economic and social situation. We must cooperate in every field where we can work together. That is the only way,” President Rivlin said.

The Chilean leader will be signing agreements on satellites, water management, solar energy and cyber security while in Yerushalayim on a three-day visit. He is scheduled to meet with Israeli Prime Minister Binyamin Netanyahu on Wednesday afternoon.

Piñera last visited Israel in 2011 during his previous term as president. In speaking with Rivlin, he referred to Israel as “a wonderful country.”