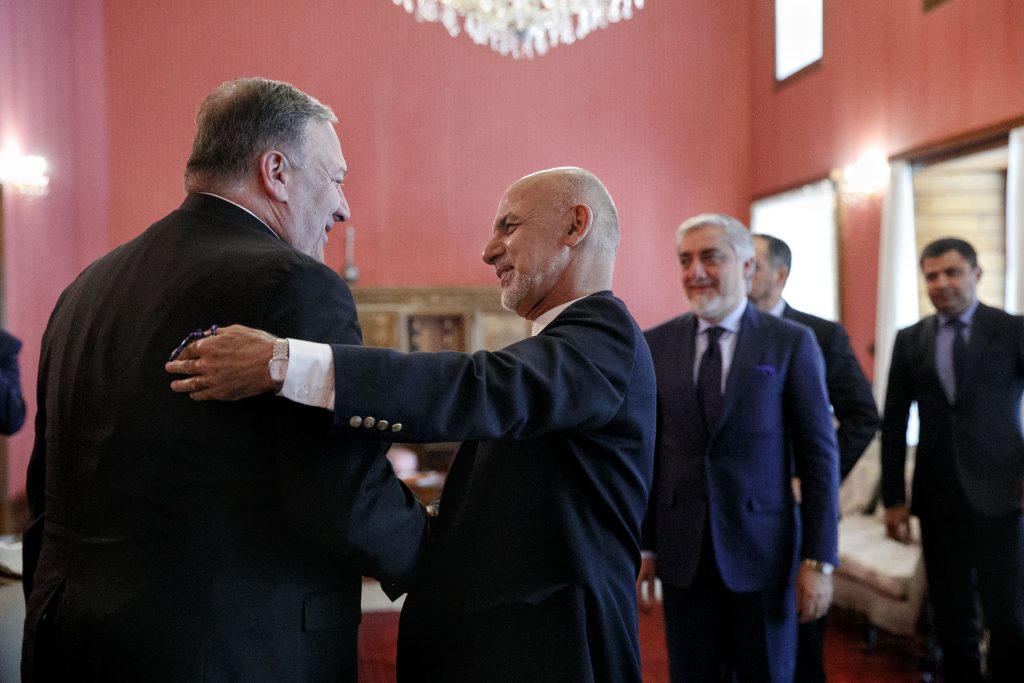 Secretary of State Mike Pompeo reassured Afghans on Tuesday that the United States will not negotiate behind their backs even as it seeks to fosters a peace deal with the Taliban leading to the withdrawal of 14,000 U.S. troops.

After meeting with President Ashraf Ghani on an unannounced visit to Kabul, Pompeo declared to reporters that after 18 years of war, “the hour has come for peace.”

Pompeo’s stop in Afghanistan while en route to India comes as U.S. officials and Taliban leaders plan to sit down together in Qatar for a seventh round of talks hoping to end the war. Pompeo said he hopes for a peace deal before Sept. 1, ahead of the presidential election in Afghanistan. The talks are expected to focus on Taliban demands for the withdrawal of 17,000 foreign troops, most of them American, and the U.S. demand for an end to terrorist attacks plotted from foreign soil.

“While we’ve made clear to the Taliban that we are prepared to remove our forces, I want to be clear, we’ve not yet agreed on a timeline to do so,” Pompeo told reporters in a news conference after spending about seven hours in Kabul, the capital.

Pompeo said participants in the Qatar talks led by U.S. envoy Zalmay Khalilzad, who accompanied Pompeo to his meetings with Afghan leaders, have nearly finished a draft text to outline the Taliban’s commitment that the country will not be a safe haven for terrorists. But he also said the United States will insist that the Taliban have dialogue and eventually negotiations with representatives of the Afghan government. So far, the Taliban has refused to talk to Afghan government representatives, calling them “puppets.”

Pompeo sought to address Afghan fears of abandonment, assuring them that even as the United States draws down its troop presence, it will continue to support gains made by Afghan women and other groups.

“We’re working to bring Afghans together to negotiate at the table to decide the future of their own country,” he said. “When that table is put together it will be large table. It is crucial to include not just the Taliban and the government, but also representatives of opposition parties, civil society, including women and youth.”