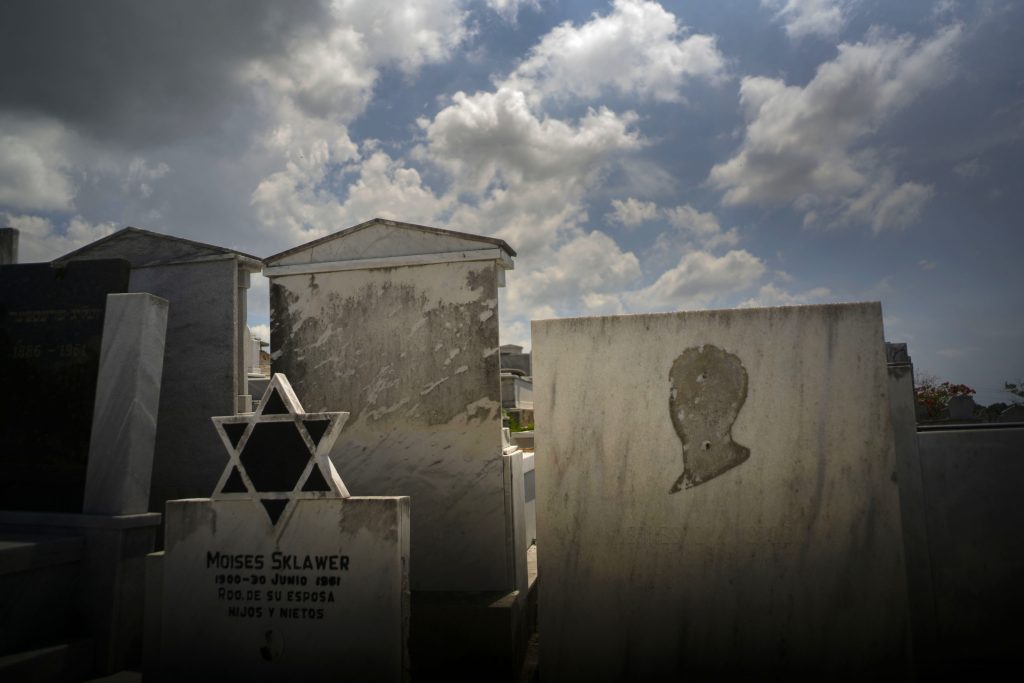 Some marble grave covers are broken and tombstones lie on the ground, covered in moss. At some graves, vegetation pokes through the cement cracks.

But slowly, the oldest Jewish cemetery in Cuba is beginning to be rehabilitated, along with the memory of many of the island’s earlier Jewish inhabitants.

The restoration is the result of an initiative by the government-run City Historian’s office to spruce up Havana ahead of the 500th anniversary of its founding in November. Across the city streets are being paved, monuments are being polished and historic sites are being restored.

There is also an effort to recover long-forgotten sites — among them the all but neglected Jewish cemetery in the Guanabacoa neighborhood on Havana’s eastern side.

Many headstones have words of consolation written in Hebrew, Yiddish or Spanish.

Land for the cemetery in Guanabacoa was bought in 1906 by members of the island’s first Hebrew society. It was inaugurated in 1910 by Jews and their descendants from Central and Eastern Europe, many of whom fled persecution in the period between World Wars I and II. “It has historical and sentimental value,” said David Prinstein, vice president of the Hebrew Board of Cuba.

For many years, he said, the Jewish community was unable to raise the $200,000 needed to completely overhaul the grounds. Jews in the U.S. contributed to the upkeep of some burial plots, but the cemetery as a whole was largely left to deteriorate.

Pilar Vega, an engineer in the Historian’s Office, told local media there are about 1,100 grave sites in the cemetery. About 50 have been repaired and 150 more are expected to be cleaned up before the end of this year, she said. Whether the entire cemetery would be refurbished remains unclear, but a plan is in place to refurbish the facility for taharah. Vega didn’t say how much the state has spent on the project.

The restoration effort in Havana comes as Cuba finds itself struggling with a severe economic crisis, which experts have blamed on a combination of a Trump administration trade embargo and the halt of Venezuelan shipments of subsidized fuel that Cuba used to generate electricity and earn hard currency on the open market. The country’s lack of liquidity has now made it difficult to pay creditors and suppliers, resulting in a shortage of basic products like chicken and flour.

Over the years, the Jewish community has not been immune to the island’s political ups and downs.

Many Jewish families left the country after the 1959 revolution, leaving behind their interred family members in accordance with the halachah that prohibits bodies from being exhumed unless they are taken to Eretz Yisrael. Others fell prey to the staunchly communist-secular position espoused by the Castro government. Some Jews moved to Israel amid the periodic economic crunches in the ensuing decades.

“Families leave and many even forget those left here,” lamented Prinstein, who said the cemetery had also been looted throughout the decades of neglect.

It was not until the 1990s that Judaism on the island regained strength, partly due to the efforts of a noted surgeon, José Miller. He helped Jews scattered throughout Cuba reconnect with their roots at a time when the Communist government discouraged religious denominations. Miller, who died in 2006, is buried in a prominent place in the cemetery.

The cemetery also has a 3-meter (10-foot) monument paying tribute to the 6 million Jews who were killed in the Holocaust. A half-dozen bars of soap that the Nazis made with human fat from the concentration camps are buried nearby.

Adela Dworin, president of the Hebrew Board of Cuba, lost nearly her entire family in the Holocaust. She said she was a schoolgirl in Cuba when the memorial was inaugurated in 1947. Her parents had left a small town in Poland before war erupted in 1939, but her grandmother and uncles stayed behind, she said.

On a recent day, a group of workers’ scrubbed tombstones and reconstructed various installations at the cemetery. Other repairs have also become more visible such as a paved street nearby.

“We are not the country’s only problem. There are many places that require the attention of the Historian’s Office, so we are eternally grateful for their interest and friendship to the Jewish people,” Dworin said.