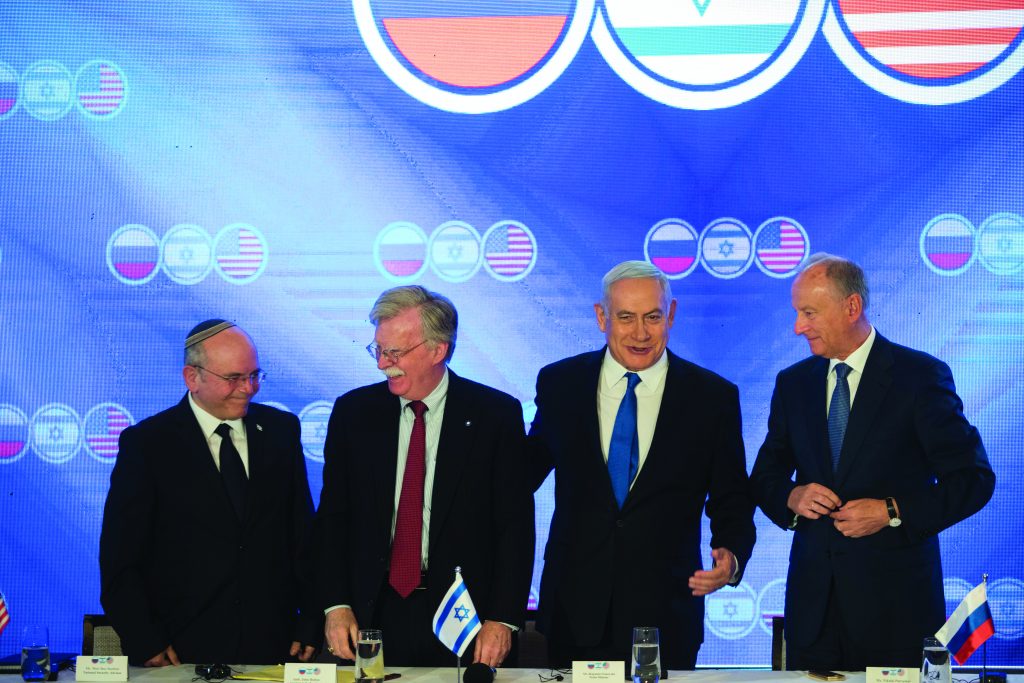 Speaking at a press conference in Yerushalayim, Bolton summed up the results of a trilateral summit held between the national security advisers of the United States, Russia and Israel.

“The threat of a nuclear Iran is very real,” said Bolton. “We see continuing evidence, growing evidence of Iran’s violations of not just the nuclear deal, but the nonproliferation treaty itself. The IAEA [International Atomic Energy Agency] has already found Iran in violation of the nuclear deal because of its exceeding the limits on sophisticated centrifuges.

“Iran itself has threatened to blow through some of the key limits in the nuclear deal.

“All this means that the threat of a nuclear Iran is very real, as are the threats of Iran’s support for terrorism, its ballistic missile program, and its other malign activities in the Middle East.”

When asked whether the Trump administration would consider lifting sanctions on Iran to encourage it to return to the negotiating table, Bolton said Tehran had given no indication it was prepared to alter its behavior.

“If Iran were serious about a solution, they wouldn’t be violating the nuclear nonproliferation treaty. It wouldn’t be the world’s central banker for international terrorism. It wouldn’t have its forces engaged in combat in other sovereign countries. And it would be a very different place. That’s why we put the sanctions in place.”

The summit opened just days after Iran shot down an American drone aircraft patrolling the Straits of Hormuz – the latest escalation in the region, following a string of suspected Iranian attacks on oil tankers in the strategic waterway.

In statements to the press before a trilateral meeting, Bolton blasted Tehran for its nuclear weapons program and acts of “belligerence and aggression.”

“Iran’s provocations, which also include threats to and attacks on American personnel and assets in the Middle East are the external manifestations of the central threat that Iran poses, namely its continued pursuit of deliverable nuclear weapons.”

“All Iran needs to do is walk through that open door.”

Netanyahu also spoke at the summit, warning Iran that Israel would “respond forcefully to any such attacks” by Tehran. “We have acted hundreds of times,” Netanyahu continued, alluding to Israeli airstrikes on Iranian forces stationed in Syria.

Russia’s Patrushev said the Israeli strikes against Iran are not helpful and that what is needed is stronger cooperation between the defense establishments of the various countries.