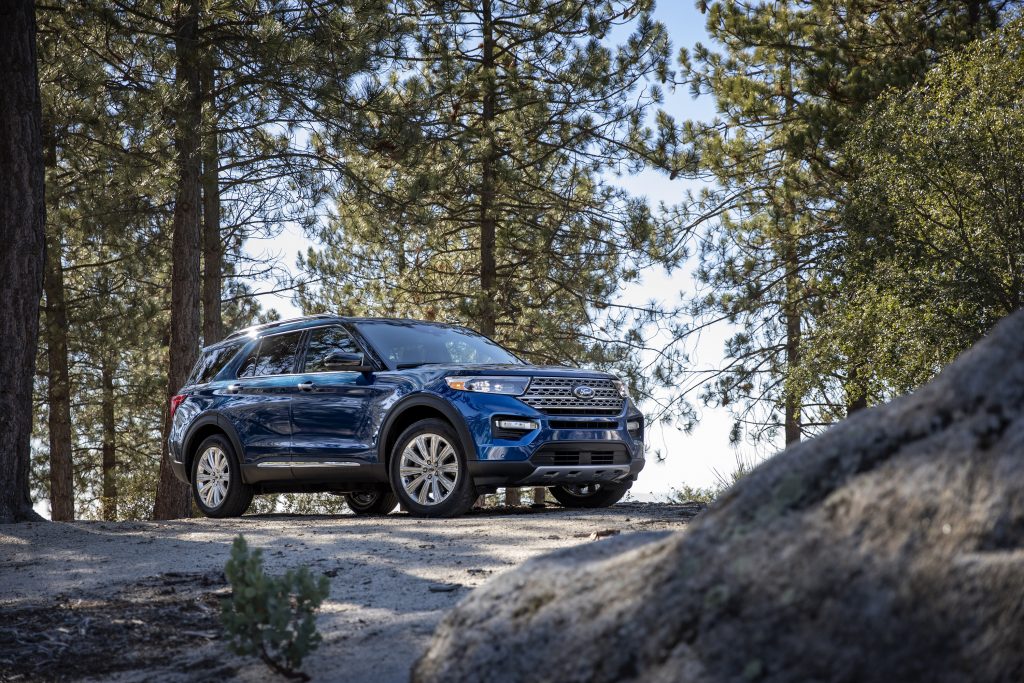 It’s raining at New York’s LaGuardia Airport as I write this, and it’s led to massive delays for Delta Airlines. Nearly five hours after I was scheduled to depart, I am still waiting to board, something that will allegedly happen four hours from now. Never mind the flight after mine has boarded and left; I have to wait. And what does the airline have to say about ruining my life today?

“So sorry for the delay, but it’s raining. So sorry.”

It’s remarkable that when airlines make these routine SNAFUs, they get away with impunity. In contrast, when automakers make the slightest little slip, they pay. And so, here I sit, hour five of a nine-hour delay because it’s raining.

Drivers handle rain — and worse — somewhat better than airlines do, and indeed this is what has made SUVs such as the Ford Explorer the vehicle of choice for so many motorists. With four-wheel drive and an 8-inch ride height, Explorers shrug off any weather.

So it’s big news when the Ford Explorer gets a top-to-bottom redesign, as it has for 2020.

Abandoning the front-wheel-drive Volvo XC90 platform it had formerly used, the Explorer uses new rear-wheel drive architecture, although all-wheel drive is available. The switch can be seen in the new vehicle’s updated styling, with front wheels with little front overhang, lending a sportier air to the Explorer’s gently sloping roofline and sharper lines, although its look isn’t radically different from what’s come before.

For the first-timer, a Hybrid with a normally aspirated 3.3-liter V-6 and an electric motor that produces 318 horsepower and can tow 5,000 pounds. Base LT, XLT, and Limited trims come with rear-wheel or all-wheel drive, while ST and Platinum models come solely with all-wheel drive. A 10-speed automatic transmission is standard.

Opting for the V-6 engine also brings with it a larger 20-gallon fuel tank; other models make do with an 18-gallon tank.

Among drivelines, the Hybrid appears to be the best compromise. The base EcoBoost suffers from turbo lag off the line, and at speed it revs higher in the rev range than the other power plants offered, with an engine note that constantly reminds you that it’s the base driveline. This also results in more shifting from the transmission, although shifts are very smooth. In contrast, the ST and Platinum offer effortless acceleration. The ST is very much the one who is athletic, strong, and always ready to party — while the Platinum is sober, self-assured adult and nearly as fast as the ST.

Still, it seems the Hybrid is the ideal driveline. While only slightly more powerful than the 2.3-liter EcoBoost, the combination of a normally aspirated V-6 and the electric motor’s instant torque availability lends it a peppy feel off the line, as well as at speed. And it offers a greater driving range on a single tank of fuel. It has more power than most drivers will need, and will keep them happy when it’s time to fill the tank, which is smaller than in other Explorers.

It’s pretty remarkable that Ford has engineered a rear-wheel drive hybrid, which allows them to dial up driving fun while also providing a remarkably tight turning radius. It also doesn’t restrict how much horsepower they can add to the two-wheel drive variants, something that isn’t true of front-wheel drive crossovers.

Ford officials say there is little suspension tuning difference among the different Explorer models save the ST. However, there appears to be a difference since the base 2.3-liter EcoBoost driveline is lighter than the others offered, particularly the Hybrid and its naturally-aspirated 3.3-liter V-6 with battery pack and other hybrid bits. The added weight settles the ride compliance, whose soft nature and greater body motions can be unsettling. By contrast, the ST is far more vigorous and is the most fun to drive of the bunch, although none are as fun to drive as you might expect.

Up to seven selectable drive modes tailor the Explorer’s response to road conditions on demand, while Ford Co-Pilot360, a suite of driver-assist technologies, is standard. Active Park Assist 2.0, is available, which automatically parallel or perpendicular parks the Explorer without driver intervention.

While it’s parking itself, you’ll find the Explorer’s first two rows comfortably offer good leg and headroom, although the third row is best left to children or friends you intensely dislike. The cushion is inches off the floor, ensuring that adults have a knees-up seating position. That said, the ST’s front thrones could use more side bolstering. As you’d expect, lower trim levels get a second-row bench, while upper trim levels get captain’s chairs.

The instrument panel has a simple design and is easy to use at first glance. The steering wheel controls work well, once you’re familiar with the layout. The 8-inch infotainment screen is adequately sized, but the screen graphics take up too much space. Platinum and ST models get a larger screen that’s more helpful, but the space-robbing graphics that are problematic on the smaller screen only grow in size on the larger one.

Better are the little touches throughout the interior, the vertically tilted wireless charging pad that’s nestled under the lip of the center console bin, keeping it safe from spilling beverages, or the flat surface between the second-row seats and the doors that make entry top third row easier.

Small objections aside, the 2020 Ford Explorer proves very satisfactory as an all-wheel drive family bus, with handsome styling, good handling and the latest in technology.

It sure beats flying.