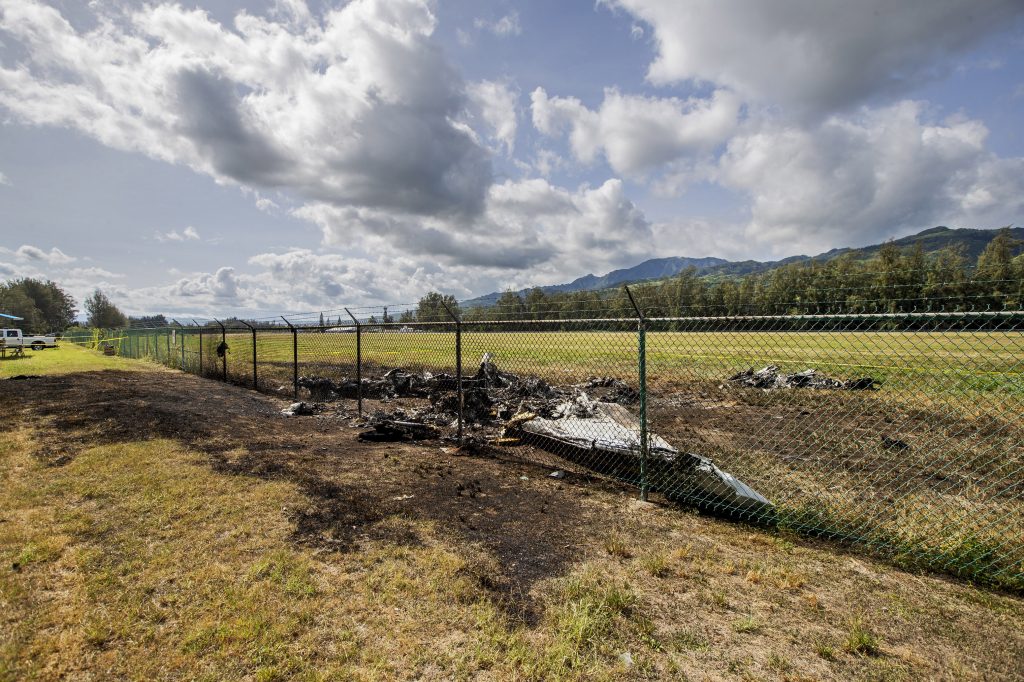 A skydiving plane that crashed in Hawaii, killing 11 people, was involved in a terrifying midair incident three years ago in Northern California that prompted the 14 skydivers aboard to jump earlier than planned to safety, according to government investigative records.

The Beechcraft King Air plane crashed and burned on Oahu island’s north shore Friday evening after witnesses said it appeared to turn back shortly after takeoff.

In the July 23, 2016, incident near Byron, California, the twin-engine plane stalled three times and spun repeatedly before the pilot at that time managed to land it safely, the National Transportation Safety Board said in its investigative report. The agency blamed pilot error.

No one aboard survived the Hawaii crash, which left a small pile of smoky wreckage near the chain link fence surrounding Dillingham Airfield, a one-runway seaside airfield.

Steven Tickemyer saw the plane take flight, get 75 to 100 feet off the ground and turn away from the mountain range nearby.

Tickemyer told The Associated Press this all happened in about 20 to 30 seconds.

He and his friends were watching from a beach across the street. They hopped in his truck, called authorities and drove to the crash site.

They screamed to see if anyone would call for help, but no one responded, he said.

The crash appeared to be the worst U.S. civil aviation accident since a 2011 accident at the Reno Air Show in Nevada that killed the pilot and 10 spectators.

Officials in Hawaii initially reported that nine people had died and that three of them were customers of the skydiving company operating the plane and that six were employees. But the Hawaii Department of Transportation tweeted Saturday that officials later “confirmed there were 11 people on board the plane” and no survivors. They were not identified.

The flight was operated by the Oahu Parachute Center skydiving company. The ratio of employees to customers aboard suggested that tandem jumps may have been planned in which the customers would have jumped while attached to experienced skydivers, Tim Sakahara, a spokesman for the Hawaii Department of Transportation, told reporters.

Some family members of those aboard were at the airport when the plane went down at about 6:30 p.m., Honolulu Police Chief Manuel Neves said.

Witness Wylie Schoonover saw the plane flying over trees while driving from a nearby YMCA camp after picking up a friend. Then she saw smoke billowing from the airfield and drove over.

There was an “insane amount of fire,” she said.

“It didn’t even look like a plane. A bunch of people were asking ‘what is this?’ It was completely gone,” Schoonover said.

Natacha Mendenhall said her cousin Casey Williamson, who worked at Oahu Parachute Center, was on board the plane. She said her family has not been officially notified of his death. But they provided Honolulu police with Williamson’s name and date of birth, and the police confirmed he was on the flight, she said.

The 29-year-old Yukon, Oklahoma native started skydiving about two-and-a-half years ago. He moved to Hawaii a year and a half ago to focus on sky-diving full time. He was an adventurer, she said, who lived in Vail, Colorado, to snowboard and Moab, Utah, to skydive.

Williamson was his mother Carla Ajaga’s only child, Mendenhall said.

“We’re all very upset,” said Mendenhall, speaking from her home in Fort Worth, Texas. “She cannot really talk right now. What she wants everyone to know is how full of life her son was, how loving he was.”

The family has created a GoFundMe page to raise money for his funeral expenses.

The plane with two turboprop engines was manufactured in 1967, FAA records said.

The NTSB report on the 2016 incident in Northern California said the plane rotated nine times during one of the three spins it experienced. Investigators found that the plane had lost a piece of horizontal stabilizer and that the plane’s elevator had broken off. The plane was also too heavily weighted toward the back, which was also blamed on the pilot.

No one answered the phone at Oahu Parachute Center, which advertises its services on a web site saying its jumps offer people “a magical experience.” Tandem jumps are featured at prices ranging from $170 to $250.

Videos from the company’s social media show jumps from the plane that crashed, with customers strapped to employee skydivers jumping out the side door of the aircraft from 10,000 or higher, with the Pacific Ocean and the Oahu’s green mountains far below.

Dillingham Airfield is used mostly for skydiving and glider flights. Hawaii shares the airfield with the Army, which uses it for helicopter night-vision training.