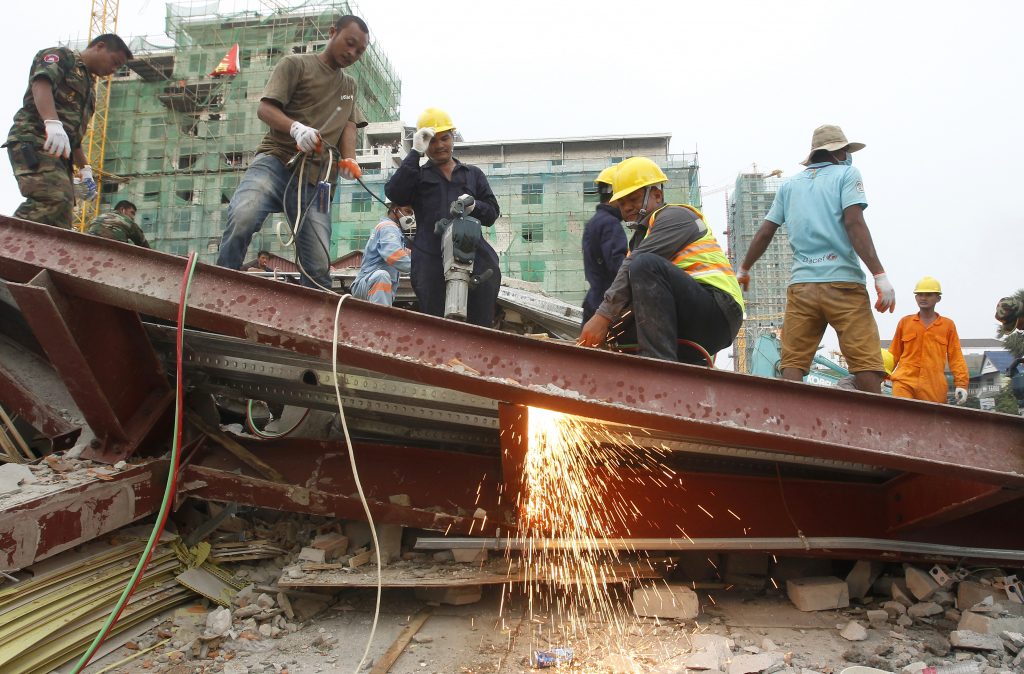 Cambodian rescuers combing through the rubble of a collapsed seven-story building recovered the bodies of 15 construction workers and pulled out 24 injured, as authorities questioned four Chinese who were involved with the project.

Construction workers said the unfinished building in the coastal city of Sihanoukville doubled as their housing, with the crew spending nights on the second floor. Nhor Chandeun and his wife were asleep when at around 4 a.m. Saturday they heard a loud noise and the building crumbled on top of them.

“All the workers were asleep,” the 31-year-old said from a hospital in the city. “A moment before the building collapsed it was vibrating and then it was falling down. But it was too quick to escape.”

The Ministry of Labor and Vocational Training said that 30 workers were at the site when the building collapsed, but Nhor Chandeun said there were about 55-60 people inside the building.

Yun Min, the governor of Preah Sihanouk province, said the building was owned by a Chinese investor who leased land for a condominium — one of many Chinese projects in the thriving beach resort. Provincial authorities said in a statement that four Chinese nationals involved in the construction have been detained while an investigation into the collapse is carried out.

It wasn’t immediately clear what caused the collapse.

Rescue workers were using saws to cut steel beams and excavators to move piles of rubble from the site. Officials said 1,000 people were taking part in the operation that continued overnight into Sunday morning.

Nhor Chandeun and his wife were trapped for 12 hours before rescuers found them.

“My wife and I kept calling for help,” he said. “We were shouting and shouting but there was no sound replying to us and we presumed that we would die under the rubble.”

“Fortunately the rescuers found me in time,” he added.