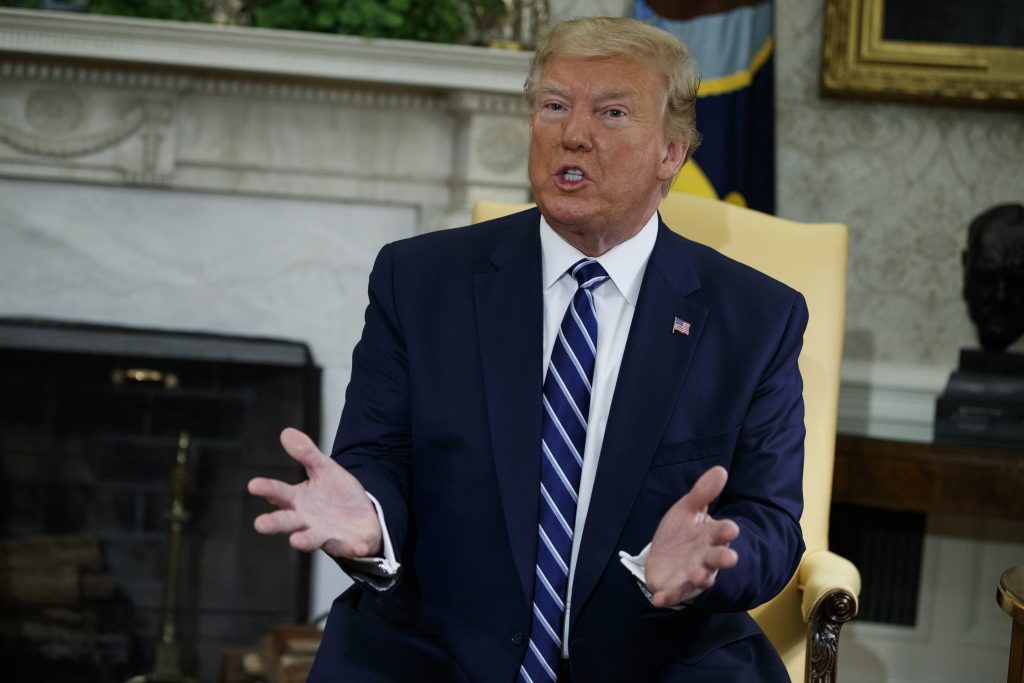 President Donald Trump declared Thursday that “Iran made a very big mistake” in shooting down a U.S. surveillance drone near the Persian Gulf but suggested it was a foolish error rather than an intentional escalation of the tensions that have led to fears of open conflict.

Asked about a U.S. response, the president said pointedly, “You’ll find out.”

The downing of the huge, unmanned aircraft was a stark reminder of the risk of military conflict between U.S. and Iranian forces as the Trump administration combines a “maximum pressure” campaign of economic sanctions against Iran with a buildup of American forces in the region.

On Thursday, Iran called the sanctions “economic terrorism,” insisted the drone had invaded its airspace and said it would take its case to the United Nations in an effort to prove the U.S. was lying about where the aircraft was.

Trump, who has said he wants to negotiate with the Islamic Republic and avoid war, restated that position and appeared to play down the significance of the shootdown.

He cast it as “a new wrinkle … a new fly in the ointment.” Yet he also said that “this country will not stand for it, that I can tell you.”

Shortly before Trump spoke, Air Force Lt. Gen. Joseph Guastella, commander of U.S. Central Command air forces in the region, took a more pointed view of the shootdown in an area where Trump has blamed Iran for attacking shipping vessels.

“This attack is an attempt to disrupt our ability to monitor the area following recent threats to international shipping and free flow of commerce,” he said.

The Trump administration has been putting increasing economic pressure on Iran for more than a year. It reinstated punishing sanctions following Trump’s decision to pull the U.S. out of an international agreement intended to limit Iran’s nuclear program in exchange for relief from earlier sanctions.

The first U.S. reaction to the shootdown was Trump’s Thursday morning tweet of six forceful words: “Iran made a very big mistake.”

But later, while meeting with Canadian Prime Minister Justin Trudeau, Trump said, “I would imagine it was a general or somebody that made a mistake in shooting that drone down.”

He said the American drone was unarmed and unmanned and “clearly over international waters.” It would have “made a big, big difference” if someone had been inside, he said.

“I find it hard to believe it was intentional, if you want to know the truth,” Trump said. “I think that it could have been somebody who was loose and stupid that did it.”

Taking issue with the U.S. version of where the attack occurred, Iranian Foreign Minister Mohammad Javad Zarif tweeted that his country had retrieved sections of the military drone “in OUR territorial waters where it was shot down.” He said, “We don’t seek war but will zealously defend our skies, land & waters.”

U.S. Gen. Guastella disputed that contention, telling reporters that the aircraft was 21 miles from the nearest Iranian territory and flying at high altitude when struck by a surface-to-air missile.

One U.S. official said that there was a second American aircraft in the area that was able to get video and imagery of the drone when it was shot down. The official spoke on condition of anonymity to discuss information before it became public.

Some members of Congress expressed alarm at the possibility of open conflict in the Middle East.

The Senate’s top Democrat called the downing of the American drone “deeply concerning” and accused the administration of not having an Iran strategy and keeping Congress and the rest of the nation in the dark.

“The president needs to explain to the American people why he’s driving us toward another endless conflict in the Middle East,” said Sen. Chuck Schumer of New York.

House Speaker Nancy Pelosi said she didn’t think Trump wanted war with Iran and the American people have “no appetite” for it either. She said the U.S. needs to be “strong and strategic” about protecting its interests and “cannot be reckless.”

Talking tougher, Republican Sen. Lindsey Graham of South Carolina called Iran a “murderous regime” and said, “If they’re itching for a fight they’re going to get one.”

“We’re a lot closer today than we were yesterday, and only G-d knows what tomorrow brings,” said Graham, a Trump ally who talked with the president by telephone.

The senator also focused on the issue of Iran’s nuclear ambitions, saying its leaders have refused to negotiate after Trump withdrew the U.S. from the international agreement to limit Iranian development of nuclear weapons.

And he repeated the U.S. contention that Iran had attacked an oil tanker, another allegation the Iranians have denied.

As for the possibility of Iran developing nuclear weapons, Graham said it’s imperative that the U.S. clearly tell the Iranians that any attempt to increase uranium enrichment will be seen as a “hostile act against the United States and our allies in Israel and will not go unanswered.”

While Trump declined to give any hints about a response to the downing of the drone, Shibley Telhami, a Mideast expert and the Anwar Sadat Professor for Peace and Development at the University of Maryland, said he expects some sort of military reaction.

“How can they not respond? It’s not possible,” he said. “Once you say it was in international waters, you put yourself in a position where if you don’t respond, people won’t take you seriously.”

But Telhami cautioned that it’s not easy to apply the brakes once a conflict starts to escalate.

“The question to ask is, will the U.S. choose something comparable, in kind, with no draining of blood.”

Another factor: This all comes as Trump is launching his re-election campaign. He ran for president promising to bring American troops home from the Middle East and Afghanistan and has repeatedly said he wants to keep America out of “endless wars.”

Ari Fleischer, who was press secretary for President George W. Bush, cautioned against thinking about politics when weighing any response to Iran.

“I suspect a successful limited counter-strike, such as taking out the missile battery that fired at the drone or the sinking of an unmanned Iranian vessel, would be seen as a well-calibrated show of resolve and discipline,” Fleischer said in an interview. He added that “if we do nothing, Iran may strike again thinking it has impunity.”