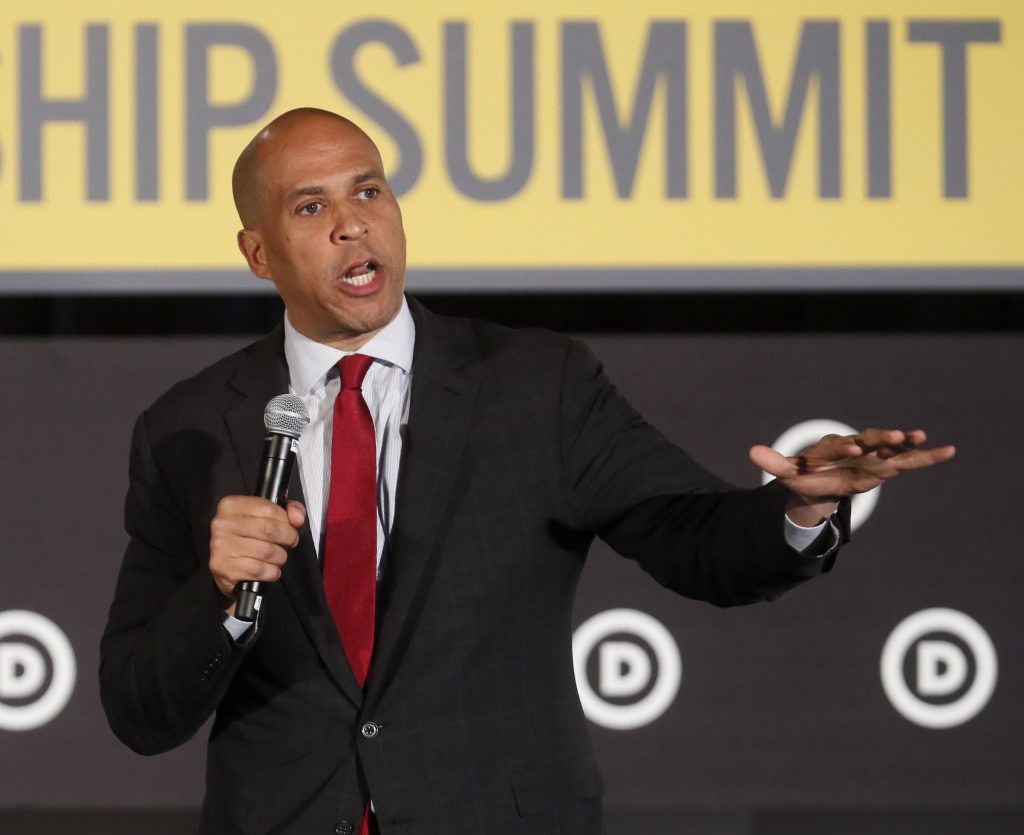 In an effort to reduce mass incarceration, Cory Booker wants to reform the clemency powers of the White House and shorten federal prison sentences for as many as 20,000 nonviolent drug offenders, according to a proposal unveiled by the Democrat’s presidential campaign Thursday morning.

On his first day in the Oval Office, Booker would launch clemency reviews for federal prisoners who have been convicted of marijuana-related offenses or who received especially lengthy sentences for having certain types of drugs, a punishment that has landed most heavily on black Americans.

Additionally, in a move with longer-term implications, Booker’s “Restoring Justice Initiative” would transfer the clemency appeals process from the Justice Department to the White House, a streamlining measure that criminal justice reform advocates say would likely lead to more commutations over time.

Sen. Amy Klobuchar (D-Minn.), another presidential candidate, has proposed a somewhat similar shift, but hers would still involve prosecutors.

“The War on Drugs has been a war on people, tearing families apart, ruining lives, and disproportionately affecting people of color and low-income individuals — all without making us safer,” Booker said in a statement.

“Granting clemency won’t repair all the damage that has been done by the War on Drugs and our broken criminal justice system, but it will help our country confront this injustice and begin to heal,” Booker said.

Support for criminal justice reform has gained momentum in the U.S. in recent years, especially among liberals, offering both promise and peril for the Democratic presidential field, which has largely criticized mass incarceration.

The U.S. has the highest incarceration rate in the world, and clemency experts interviewed by the Los Angeles Times — including two who consulted with Booker’s campaign on the plan — said the proposal would not make a significant dent in the nation’s prison population of nearly 1.5 million.

Of the potential 20,000 federal prisoners whose sentences would be reviewed for clemency, “it’s unclear that they’ll all get it,” said Rachel Barkow, a professor of law and politics at New York University who studies clemency and was consulted by the Booker campaign.

Barkow said the review process could take time and would still involve the final discretion of the White House. “The devil could be in the details of how they actually implement it,” she said.

Another clemency expert consulted by the Booker campaign, Mark Osler, a professor of law at the University of St. Thomas in Minneapolis, noted that the groups Booker is targeting for clemency make up only a fraction of the more than 180,000 inmates in the federal prison system.

“Up to about the Reagan era, federal incarceration was about 25,000 people,” Osler said. “There’s also a need to address that over-incarceration.”

But clemency experts had their highest praise for Booker’s plan to create an executive clemency panel in the White House to handle clemency appeals, which “would give a special presumption for release for those that are 50 years of age or older and have served lengthy sentences.”

Criminal justice reformers have advocated moving the clemency review process out of the Justice Department, arguing that the agency has a conflict of interest in evaluating convictions it was responsible for securing.

“Having the Department of Justice do it is having the fox in charge of the hen house,” said JaneAnne Murray, a law professor who runs a clemency project at the University of Minnesota.

“Some real thought went into this,” Murray said of Booker’s plan.

The proposed commutations, if carried out, “would definitely be the biggest in history,” Murray added. “The most recent and the biggest example we have is President Obama, who did about 1,700.” President Trump has so far granted four petitions for commuted sentences.

Commutations, which lighten sentences, are different from pardons, which erase convictions. Both are a form of clemency, which is a power granted to the president under the Constitution.

“This is something a president could do — on Day 1, without Congress,” Barkow said of Booker’s proposal. “This is something you could hold someone accountable (for breaking) a promise like this, because it would be entirely within his control if he does it or not.”