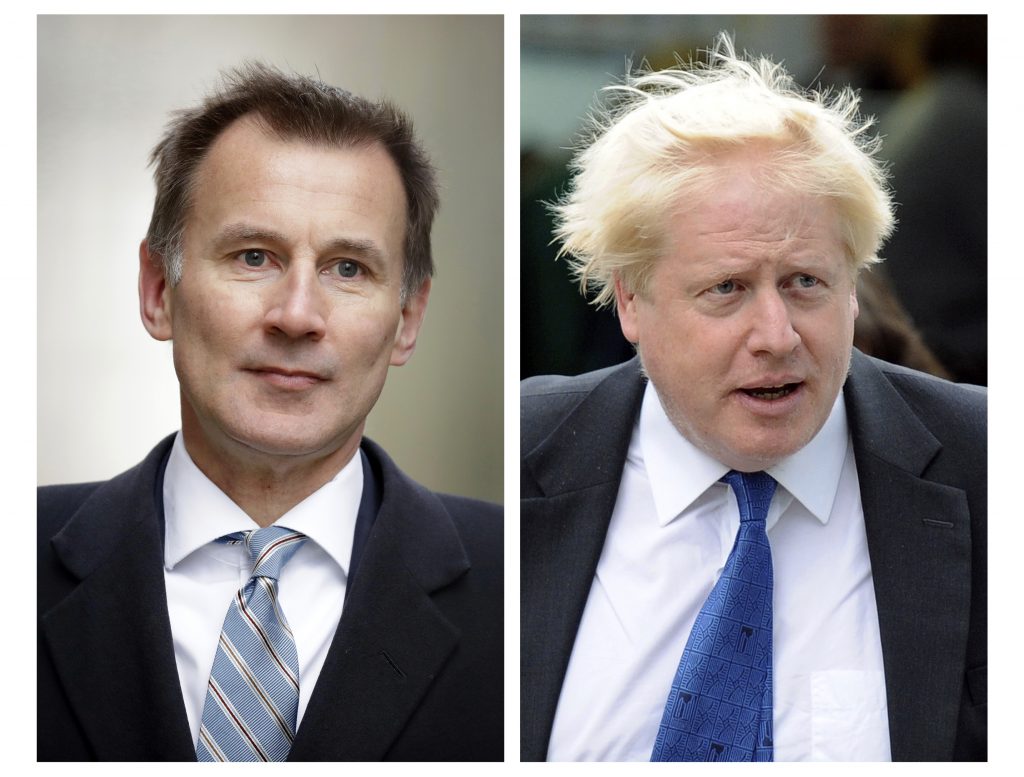 Britain’s next prime minister will be a man in his 50s who went to Oxford University — either Boris Johnson or Jeremy Hunt, the two finalists selected Thursday in a race to lead the governing Conservative Party.

Johnson, a flamboyant former foreign secretary and ex-mayor of London, topped a ballot of 313 Conservative lawmakers with 160 votes — more than half the total — and is runaway favorite to become the party’s next leader. He has led in all five voting rounds of a contest that began last week with 10 contenders.

Hunt, Britain’s current foreign secretary, came a distant second with 77 votes and will join Johnson in a runoff decided by 160,000 party members across the country. Hunt edged out Environment Secretary Michael Gove, who got 75 votes, after Home Secretary Sajid Javid was eliminated earlier in the day.

The winner of the runoff, due to be announced the week of July 22, will become Conservative leader and prime minister, replacing Theresa May.

Many in the party doubt that anyone can beat Johnson, a quick-witted, Latin-spouting extrovert admired for his ability to connect with voters, but mistrusted for his erratic performance in high office and his long record of inaccurate, misleading and sometimes offensive comments.

“Boris will say absolutely anything in order to please an audience,” historian Max Hastings told the BBC on Thursday. “Boris would have told the passengers on the Titanic that rescue was imminent.”

Hunt, who has held several senior government posts including culture secretary and health secretary, is considered an experienced, competent minister, but unexciting. He has billed himself as the “serious” candidate, in implicit contrast to Johnson.

He will try to halt Johnson’s momentum by picking away at his plans for Brexit as the two speak to meetings of party members across the country over the next few weeks.

Both Johnson and Hunt vow they will lead Britain out of the European Union, a challenge that defeated May. She quit as Conservative leader earlier this month after failing to win Parliament’s backing for her Brexit deal.

Brexit, originally scheduled to take place on March 29, has been postponed twice amid political deadlock in London. The candidates differ on how they plan to end the impasse.

Johnson, a leading figure in the 2016 campaign to leave the European Union, has won backing from the party’s die-hard Brexiteers by insisting the U.K. must leave the bloc on the rescheduled date of Oct. 31, with or without a divorce deal to smooth the way.

He also is supported by some Tory moderates who claim he has the skills to unite the party and win back voters from rival parties on both the left and the right.

Hunt backed the losing “remain” side in the referendum, but now says he is determined to go through with Brexit. He says his past in business, running an educational publishing firm, gives him an edge in negotiations.

Hunt says he would seek another postponement of Brexit if needed to secure a deal, but only for a short time.

Critics say neither candidate has a realistic plan. The EU is adamant that it won’t reopen the Brexit agreement it struck with May’s government, which has been rejected three times by Britain’s Parliament.

Irish Prime Minister Leo Varadkar said Thursday that “the withdrawal agreement is not going to be reopened.”

He also said there was “enormous hostility to any further extension” of the Brexit deadline among the other 27 EU leaders.

Many economists and businesses warn that leaving the EU without a deal on divorce terms and future relations would cause economic turmoil as tariffs and other disruptions are imposed on trade between Britain and the EU.

“The question to the candidates is not ‘What is your plan?’ but ‘What is your Plan B?'” Hammond said in extracts from a speech he is to give later on Thursday.