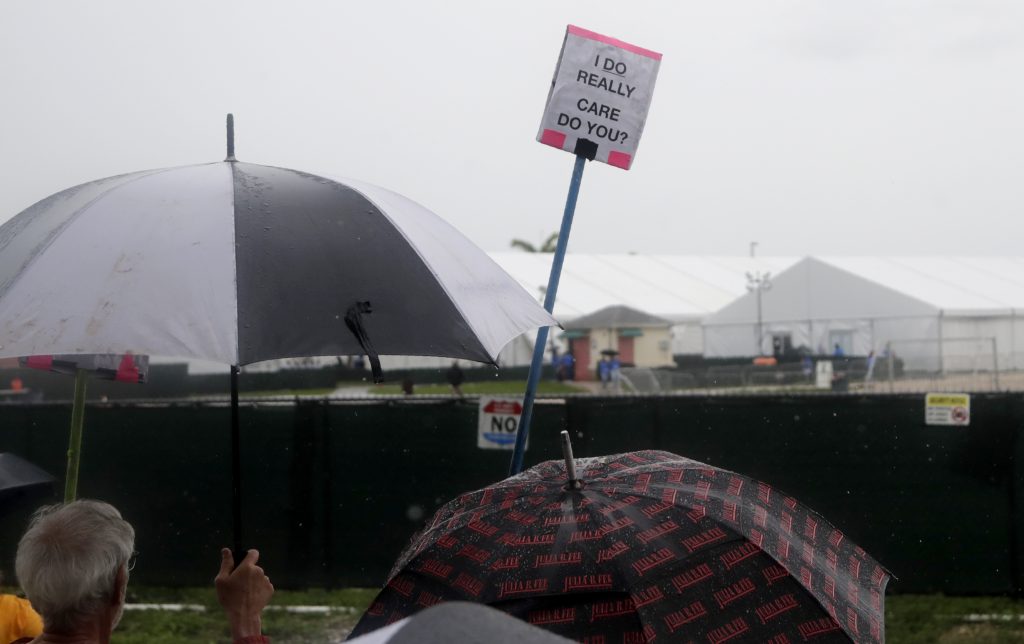 Rep. Alexandria Ocasio-Cortez, D-N.Y., pressed her case Tuesday that the Trump administration is running “concentration camps” at the U.S.–Mexico border amid criticism from Republicans who said she was demeaning Jews exterminated in the Holocaust.

During a livestream Monday night, the freshman lawmaker decried the conditions of migrant detention facilities the administration is using to cope with a surge of border crossings and highlighted a decision to hold some children at an Oklahoma Army base that was used as an internment camp for Japanese Americans during World War II.

“The fact that concentration camps are now an institutionalized practice in the home of the free is extraordinarily disturbing, and we need to do something about it,” Ocasio-Cortez told her viewers on social media. She later accused Trump of conducting “an authoritarian and fascist presidency.”

Ocasio-Cortez continued making her argument Tuesday morning, sharing on Twitter an Esquire article that raised questions about the conditions at U.S. detention facilities.

The piece by Jack Holmes, the magazine’s politics editor, quoted historians who said the facilities meet the definition of a “concentration camp” and said that not every concentration camp is intended as a death camp.

In another tweet, Ocasio-Cortez dismissed critics of her views as “shrieking Republicans.”

Among those who weighed in was Rep. Liz Cheney, R-Okla., the No. 3 Republican in the House.

“Please @AOC do us all a favor and spend just a few minutes learning some actual history,” Cheney wrote on Twitter on Tuesday morning. “6 million Jews were exterminated in the Holocaust. You demean their memory and disgrace yourself with comments like this.”

“Hey Rep. Cheney, since you’re so eager to ‘educate me,’ I’m curious: What do YOU call building mass camps of people being detained without a trial?” Ocasio-Cortez wrote. “How would you dress up DHS’s mass separation of thousands children at the border from their parents?”

“Happy to educate you,” she wrote on Twitter, suggesting Ocasio-Cortez read survivor testimonies from Yad Vashem in Jerusalem and the book “Night” by Elie Wiesel, an autobiographical account of his survival as a teenager in Nazi concentration camps.

“Here’s an Amazon link to make it easy for you to purchase,” Cheney wrote.

Hemmer seized on the fact that Ocasio-Cortez used the phrase “never again” during her livestream.

“‘Never Again’ is the phrase that Jews all over the world use to make sure that the extermination between 1939 and 1945 never happens again, and she’s using concentration camps to describe what’s happening on the southern border,” Hemmer said on air. “How in the world is that acceptable? Does she not owe every Jew on this planet an apology?”

In a letter Wednesday to Ocasio-Cortez, National Council of Young Israel President Farley Weiss criticized her reference to concentration camps, calling it “an affront to the six-million Jews who were
brutally murdered during the Holocaust.”

“While people can choose to either criticize or support the various immigration measures being employed by the United States government, wrote Weiss, “[there] is simply no comparison with what happened in these concentration camps with what is occurring at the border. Applying the terminology that you choose to use denigrates the significance of the mass murder of Jews, and we urge you to be more sensitive to the dangers of using Holocaust-related expressions in conjunction with present-day political matters.”

Weiss concluded, “In the event that you would like to learn more about the Holocaust and better understand the deadly role that concentration camps played in the Nazis’ abhorrent attempt to murder an entire generation of Jews, we would be happy to meet with you and assist in that regard. Educating people about the dangers of prejudice and religious intolerance is the key to ensuring that history does not repeat itself, and it would be our pleasure to facilitate a situation whereby you can come to gain a greater comprehension of what transpired during one of the darkest eras in modern history.”