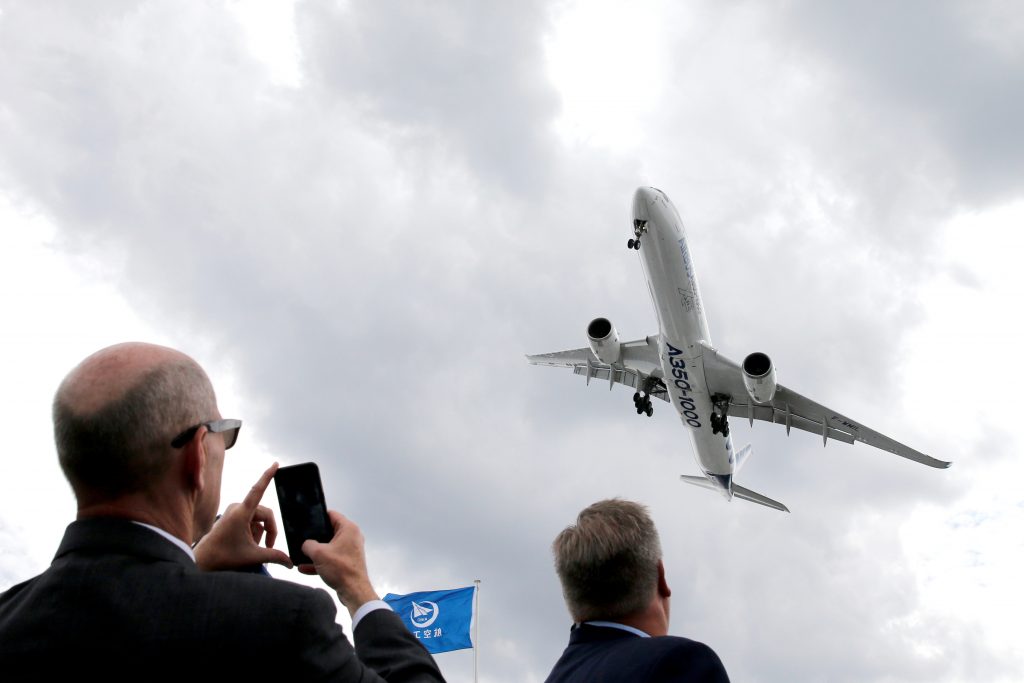 An all-electric commuter plane and a small Airbus-backed hybrid are among aircraft programs being touted at the Paris Airshow, as the industry tries to convince a skeptical public it can deliver on a pledge to halve carbon emissions by 2050.

Israeli startup Eviation has wheeled out Alice, a battery-powered nine-seater due for its maiden flight later this year, while Airbus and suppliers Safran and Daher are showing a scale model of their planned EcoPulse, a similarly sized short-hopper that packs a fuel tank as well as batteries.

Unlike cars, however, electric planes must heft their power packs aloft — a reality that limits them to small aircraft on the shortest routes, as even their proponents concede.

“The impact of battery weight is an order of magnitude more severe for us,” said Stephane Cueille, Safran’s head of research, technology and innovation.

The EcoPulse’s engine drives a central propeller and a generator to recharge its batteries and power additional electric props spread along the wingspan, delivering 20-40% fuel savings on trips up to several hundred kilometers.

Whereas the French plane is still on the drawing board, Alice’s smooth contours can be seen on the tarmac at Le Bourget, north of Paris. Eviation is aiming for a first test-flight later this year and U.S. certification by 2022.

On a single charge, Alice can fly 650 miles at 10,000 feet with a cruising speed of 276 miles per hour. Cape Air, a Massachusetts-based regional carrier, has taken an option to add a double-digit number of the $4 million planes to its fleet, Eviation disclosed at the show.

The aircraft, with a flattened profile and propellers at its wing tips, was designed as an electric plane from the ground up, said Omer Bar-Yohay, Eviation’s founder and CEO.

“It’s basically a huge battery with some plane painted on it,” he told reporters.

Among signs of growing interest from traditional players, engine maker Rolls-Royce said on Tuesday it had bought the electric aerospace division of Germany’s Siemens — which is also one of the suppliers of motors to Alice.

Engineers see a bigger future for hybrids, which can combine lighter, downsized jet engines with an electric boost during take-off and climb, for a 30% fuel saving. The additional thrusters or e-propellers also help stability, allowing a more streamlined airframe to reduce drag and consumption further.

“Then you’re starting to get to the kind of economics and sustainability that’s closer to a bus than it is to aviation historically,” United Technologies Chief Technology Officer Paul Eremenko said during a panel discussion.

UBS predicts demand for $178 billion in green aviation technologies by 2040 as they become more mainstream.