Community ‘BDS is a Failure!’ Ambassador Dayan on Israel and a Changing Middle East
Community 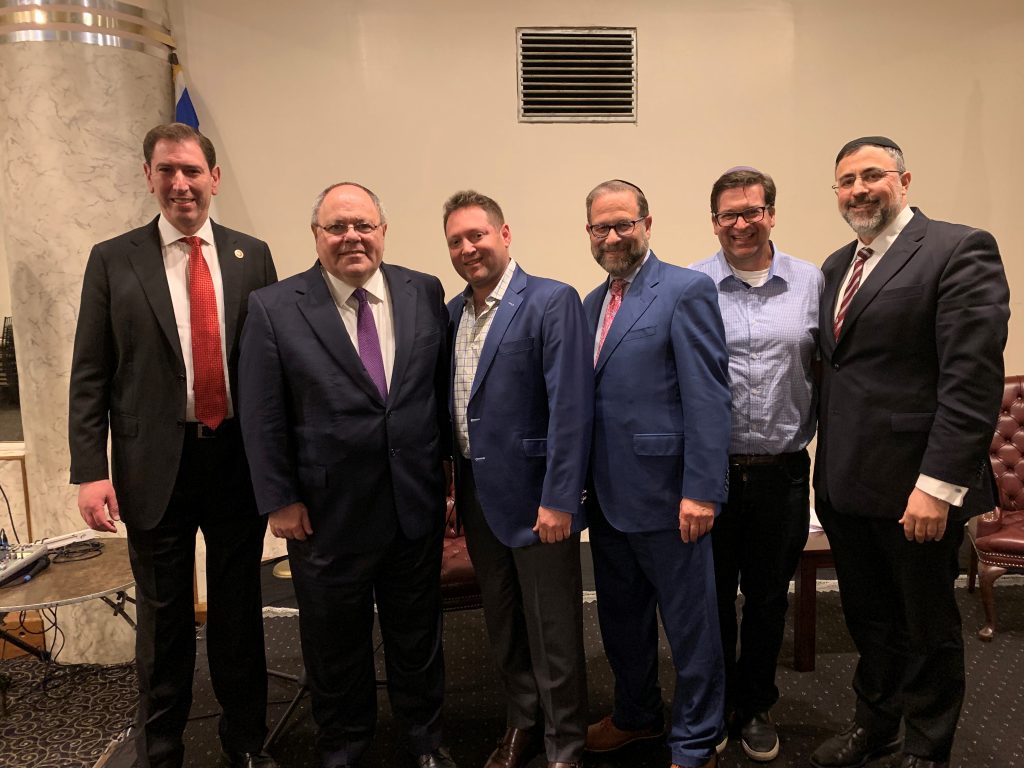 The eloquent banquet room at Kingsway Jewish Center was buzzing with anticipation as over 200 area residents awaited the entrance of Ambassador Dani Dayan, Consul General of Israel. Everyone was gleefully eager to not only listen to but also participate in discussion on “The Challenges and Opportunities for Israel in a Changing Middle East.” An eruption of cheers burst forth as the Ambassador walked in with the center’s Morah D’Asra Rabbi Etan Tokayer and formally dressed security.

As the program began, initial chatter amongst the audience was largely focused on how impressed and honored attendees were to have a “leader of State of Israel” right in their own backyard.

“My worry is that we do not get into a situation in which each one of the two great Jewish nations, Israel and America supports only themselves,” said Ambassador Dani Dayan as he emphasized the importance of unity within the Jewish community.

The Ambassador identified this as one of the top two most important things that the Jewish community must prevent from happening in this generation.

Community resident Saritte Wolkenstein told Hamodia, “ I am very impressed that Ambassador Dani Dayan came out to Brooklyn to speak with the community here that doesn’t typically have direct access with an Israeli government official.” She continued to say, “It was great that it was also free of charge.”

The program immersed the audience in a melting pot of topics that ranged from Israel’s economy to the importance of disseminating accurate information and education. Rabbi Etan Tokayer, who is the Morah D’Asra of Kingsway Jewish Center, asked Ambassador Dayan, “What can you say about the challenges that Jews and Israel face on college campuses?”

The Ambassador recounted how just last year his daughter, who attends Columbia University, was threatened by a Pro-Palestinian Group on campus. Optimistically, he added, “She was threatened, but she is a fighter. She is tough.” Then with a knowing grin he said, “I wouldn’t recommend any pro-Palestinian to test her.” The crowd went wild with applause and the Ambassador went on to share his account of a recent moment with the child of another Israel politician Gilad Sharon, who is the son of the late Prime Minister. He told him, “You are the son of a former PM, and I am the father of a future PM.”

Daniel Abilevitz who is a commercial banker and active member at Kingsway Jewish Center told Hamodia, “I feel it’s very important to provide a proper education of Jewish history and awareness to our youth.”

Fittingly moving from problems on college campuses to BDS: “Israel’s economy is doing good,” he said and noted that economically “BDS is a Failure.” Then with a meticulous combination of fact and humor he went on to point out many examples which included some humorous ones to support his statement.

Rabbi Doctor Mordechai Schiffman told Hamodia, “The ambassador’s insight regarding the state of Israel on the global political and economic stage was a refreshing message of hope and optimism.”

“It was a smashing hit!” said community member Rena Lazerowitz.

During a more solemnly toned portion of the program, he spoke on Israel and bipartisanship efforts needed. He said, “At this point it’s not about policy that people are coming after. It’s about “does Israel have a right to exist.” Then one of many memorable moments occurred as Ambassador Dayan passionately said, “Never again is a low bar!” And, “We should not accept any more antisemitism of any form! We should demand our leaders to be proactive in order to prevent those things from happening.”

Additionally, according to the numerous attendees that Hamodia spoke with, other highlights included the ambassador’s story of being smuggled into Poland by his family, in a potato sack, with a cloth over his mouth at just 6-months old.”

The event spearheaded by the center’s Chairman Rafi Lazerowitz is the just a taste of the kind of programming currently being organized to debut this fall. The center is encouraging the broader community to join them. Rabbi Etan Tokayer told Hamodia, “We feel that it is very important for us as a community to actively support Eretz Israel and Medinas Israel in any way we can. Hosting the ambassador is but one way that we can show our HaKoras Hatov and inspire further support.”

In attendance was also Councilman Chaim Deutsch, who told Hamodia, “I’m glad to have participated in this event, and hear Ambassador Dayan’s thoughtful assessment of current events in Israel. Kingsway did a great service to our community by bringing Ambassador Dayan here to Southern Brooklyn. As Chairman of the Jewish Caucus, I work closely with Ambassador Dayan in fighting anti-Semitism and advocating for issues important to Jewish New Yorkers.”

Jeff Grodko, President of Kingsway Jewish Center, told Hamodia, “I am proud that we can do programming that brings people together and serve as an epicenter for Jews with different viewpoints and backgrounds.”