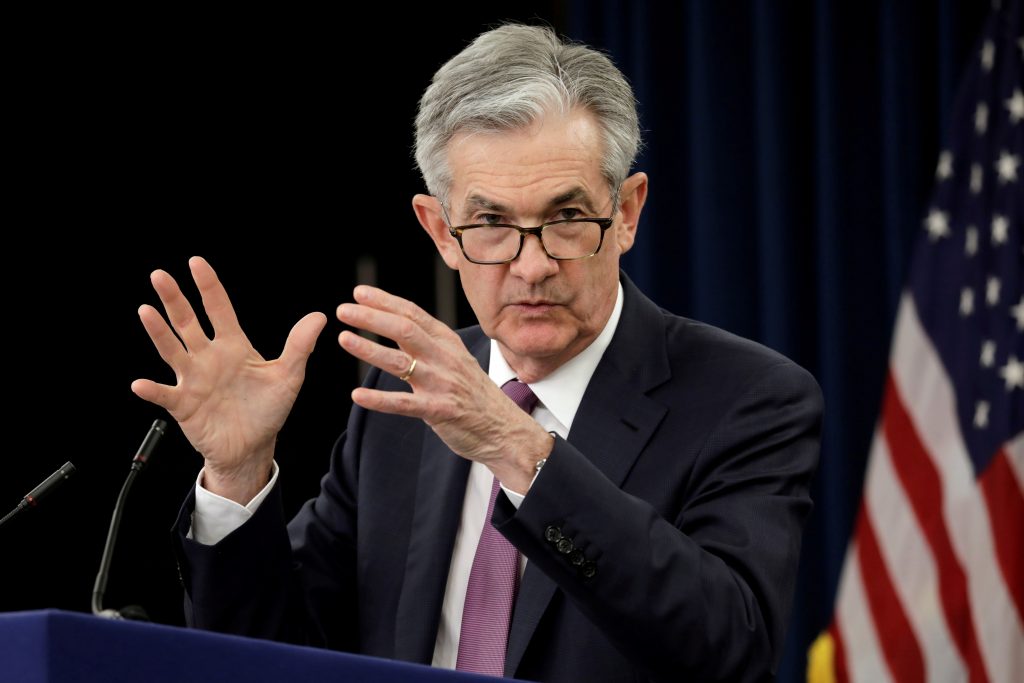 The White House explored the legality of demoting Federal Reserve Chairman Jerome Powell in February, soon after President Donald Trump talked about firing him, according to people familiar with the matter.

The White House counsel’s office weighed the legal implications of stripping Powell of his chairmanship and leaving him as a Fed governor, the people said, in what would be an unprecedented move. A replacement would have to be nominated by Trump and confirmed by the Senate.

Trump’s team conducted the legal analysis and came to a conclusion that has remained closely held within the White House, the people said, requesting anonymity to discuss internal deliberations. It isn’t clear whether Trump directed the legal review, and the people didn’t describe the outcome.

A White House official who declined to be identified said he wouldn’t comment on what he called alleged discussions from months ago. Trump’s top economic adviser, Larry Kudlow, said demoting Powell isn’t currently under consideration.

Fed spokeswoman Michelle Smith said in an email: “Under the law, a Federal Reserve Board chair can only be removed for cause.”

Bloomberg News reported in December that Trump discussed firing Powell out of frustration over the central bank’s interest rate increases.

While Trump still regularly expresses his displeasure with the Fed in tweets, talk of removing Powell has subsided. Trump told Powell in a March phone call, “I guess I’m stuck with you,” according to The Wall Street Journal.

The Federal Reserve Act provides explicit protection for all Fed governors against removal by the president except “for cause.” Courts have interpreted the phrase to require proof of some form of legal misconduct or neglect of basic duties. A disagreement over monetary policy wouldn’t meet that bar.

However, it’s less clear whether the president can demote a chair, removing him or her from the top position while leaving the person as a Fed governor.

Scott Alvarez, who served as the Fed’s general counsel for more than a decade until 2017, said Powell may be protected thanks to changes Congress made to the law four decades ago.

Up to that point, the president simply named the Fed chairman from among governors already confirmed by the Senate. But in 1977, lawmakers amended the act, requiring the Senate to confirm chair and vice chair nominees for four-year terms separately from the confirmation of their governorships, which run as long as 14 years.

Alvarez said the courts would likely interpret the 1977 change as removing not only the president’s unilateral authority to name the chair, but also the ability to dismiss him or her without cause. There is, however, no precedent for such a move and no way to know how the courts would rule if the Fed, or Powell himself, challenged the demotion.

Fed policymakers are meeting Tuesday and Wednesday. No rate move is expected immediately, though economists and investors generally agree the central bank will cut borrowing costs this year.

Powell, who became chairman in February 2018, has drawn Trump’s ire for not being more accommodating of his trade war with China. The president has repeatedly complained that the Fed, under Powell, has stymied growth and financial markets by raising rates.

“He’s my pick — and I disagree with him entirely,” Trump said last week in an interview with ABC News. “Frankly, if we had a different person in the Federal Reserve that wouldn’t have raised interest rates so much we would have been at least a point and a half higher.”

Trump had a casual dinner with Powell and Fed Vice Chairman Richard Clarida in February, Treasury Secretary Steven Mnuchin said at the time. The Fed released a statement shortly after the meeting saying that the group discussed the U.S. economy’s performance and outlook, but that Powell didn’t share his expectations for monetary policy.

Powell told the CBS News program “60 Minutes” in March that he didn’t think it was appropriate to comment on Trump. But Powell also said he doesn’t think the president has the authority to fire him. “The law is clear that I have a four-year term. And I fully intend to serve it,” he said.

Even if he could demote Powell, Trump can’t choose the chair of the Fed’s rate-setting panel, the Federal Open Market Committee. By tradition, committee members select the Fed chair as their chairman, but they are free to choose anyone on the panel. In the absence of a chair, the committee’s vice chair — traditionally the president of the New York Fed — would run the meetings.

Currently, five of the Fed’s seven seats are filled, and Trump is weighing candidates for the other two seats. Trump has named four people since last year for those two seats, none of whom made it through Senate confirmation.

By voicing his frustrations with the Fed, Trump breaks with at least two decades of tradition of presidents refraining from publicly commenting on monetary policy. Presidents, however, have reportedly applied pressure on rates.

Trump on Tuesday took his pressure campaign against central bankers to the European Central Bank. The president accused the euro area and China of weakening their currencies to gain an economic advantage, calling out ECB President Mario Draghi for pledging monetary stimulus just before the Fed meeting this week.

Draghi said at the institution’s annual forum in Sintra, Portugal, that “additional stimulus will be required” if the economic outlook for the 19-nation euro area doesn’t improve.