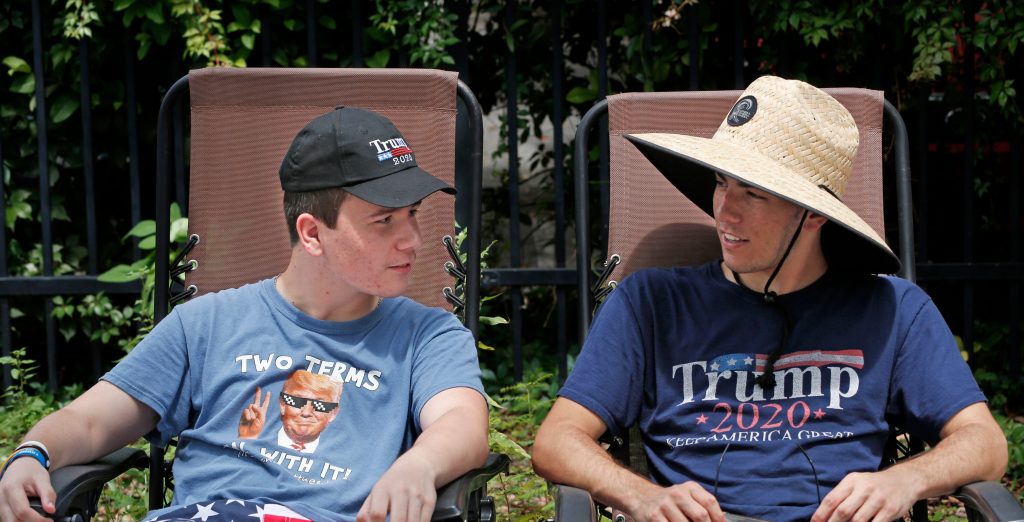 With tents, sleeping bags and coolers of water in tow, Donald Trump supports began lining up for Tuesday’s campaign rally in Orlando, nearly two full days before the event.

Outside the Amway Center, where President Trump will officially kick off his 2020 re-election bid at 8:00 p.m. Tuesday, about two dozen people and counting had staked out a spot along Division Street as of Monday morning.

“This is the big one,” said Jennifer Petito, 54, of Melbourne. “This is the mother of all rallies.”

Petitio, who was wearing a pink “Women for Trump” hat and a red-and-white striped fanny pack, was second in line. She said she got there around 2:00 a.m. — 42 hours before the rally’s start.

The Amway has capacity for about 20,000 people. Trump tweeted last week that there had been 74,000 requests for tickets. People in line said they had been told the first 100 people would get to sit in the front row.

City officials had previously said they expected people to start lining up Monday.

“We came here thinking if we got here today, we’d be late,” said Ellie Salvador, 67, of Miami. “I want to get inside, not watch him on a tv screen.”

Saundra Kiczenski, 40, of Sault Ste. Marie, Michigan, has been to 28 rallies for Trump. She said she’s waited in line through rain and freezing temperatures to hear the president speak and isn’t worried by the heat and rain expected in Orlando this week.

“I would sit here in the pouring rain,” she said. “It’s just better to get here super early and wait it out.”

Motioning to a patch of mulch and leaves, she said, “It looks like this is going to be a really comfy bed.”

Many people in line had gotten hotel rooms or reserved parking spots nearby and planned to wait in shifts.

Jeanna Gullett, 54, and Anna Connelly, 61, of Inverness, Florida, set up a tent they plan to sleep in and take cover if it rains. They had gallons of water, cans of tuna to make sandwiches, soda and a first-aid kit.

“It’s historic. He’s announcing his candidacy for the presidency,” Gullet said. “I think he’ll go down as the best president in history. I really do.”