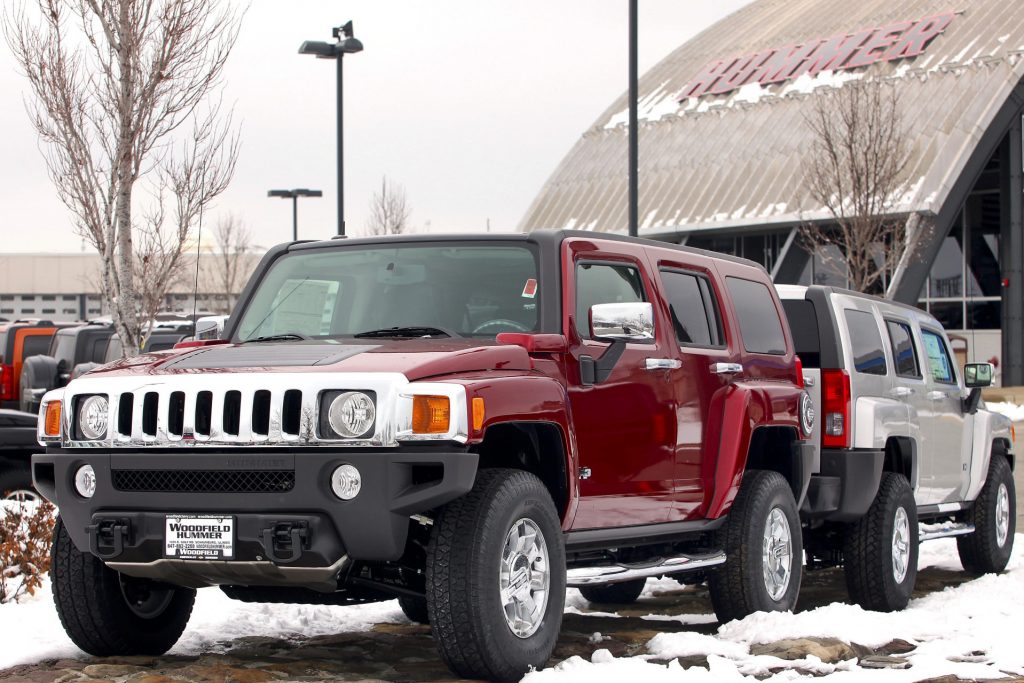 A zero-emission Hummer sounds as paradoxical as non-alcoholic whiskey, but General Motors is mulling over the idea of building an electric vehicle that would bring the defunct gas-guzzling brand back to life.

For now, it’s just an idea GM is considering as it plans which vehicles will be included in a fleet of electrified SUVs and trucks, say people familiar with the matter. The Hummer name has surfaced as way to tap growing demand for rugged SUVs with off-road capabilities, while avoiding the gasoline-burning image that made the brand something of a pariah a decade ago, said the people, who asked not to be named because the conversations are private.

Electric Hummer chatter comes as GM is looking to transform itself from a conventional, gas-powered-vehicle maker into what Chief Executive Officer Mary Barra calls an “all-electric future.” Hummer is one of many options GM is exploring as it races to develop the next generation of battery-powered vehicles. Several other car companies also are rushing to produce commercially viable electric-powered models.

When asked about it, GM President Mark Reuss was unconvinced. “I love Hummer,” Reuss said on the sidelines of a press conference on June 12. “I’m not sure. We’re looking at everything.”

Building an electric Hummer may never come to pass. Internally, the company looks at the idea as a ‘What If’ exercise when planning which models GM will build with its truck battery pack, say the people familiar with the discussions. Without electrification, GM would have a tough time selling a traditional Hummer in an era when emissions rules have become much stricter than in the brand’s heyday.

GM is currently working on two major battery-electric vehicle programs. The first is its BEV3 project, which will develop passenger cars, crossover SUVs and a variety of other small and mid-sized models. That’s part of the automaker’s pledge to put 20 EVs on the road globally by 2023. The second program would make electric pickups and other full-size vehicles, some of which can go off-road.

In its family of brands, GM has large SUVs — such as the Chevrolet Suburban and Cadillac Escalade — as well as hulking GMC vehicles including the Sierra truck and Yukon SUV. GMC also has Denali-labeled models that denote luxury and an AT4 brand for off-road capable trucks. Any of those potentially could be offered with electric powertrains, Reuss said.

“It’s massive. There might be places where we go first that are not just heavy-duty work trucks but more style and capability for off-road,” he said. “There are lots of things that are very attractive.”

GM kept Hummer after its 2009 bankruptcy but halted sales in 2010. Back then, the 10-miles-per-gallon Hummer H2 made the brand a symbol of automaker indifference to global warming. The vehicle was so heavy its weight placed it beyond the reach of federal government rules for fuel-economy tests, further enraging environmentalists. Hummer’s death knell came when oil soared past $100 a barrel, spiking gas prices and sinking sales.

GM bought the brand in 1998, six years after AM General debuted it as a civilian version of the armored Humvee military vehicle made famous for its role in the Gulf War. Former California governor Arnold Schwarzenegger was an early and very public advocate for the brand and its first model, which later became known as the H1. GM sales started with the H2 model in 2002, a $60,000 SUV made using some parts from Chevy pickups and SUVs. It was a smash hit among buyers looking for brawn and bling, prompting the Detroit automaker to follow up with the mid-sized H3 SUV and H3T pickup truck.

Over the past few years, GM has been watching the growth of Jeep, the crown jewel and moneymaker of Fiat Chrysler Automobiles NV, and wondering if Hummer might win a piece of that market, said the people familiar with the brand discussions. GM sees an opportunity to compete with Jeep for off-road vehicles that have creature comforts commanding high premiums, two of the people said. The company’s designers have done work with Hummer concepts and have experimented with Hummer styling cues on future GMC brand models.

Even if GM goes through with a plan to make an electric Hummer, it would be years away. GM’s planned electric-truck project is well underway, but those models aren’t expected to launch until after the debut of the BEV3 architecture for smaller vehicles. Cadillac or one of the higher-volume brands would probably get some of the first models on the larger electric-truck-based platform.

Earlier this year, GM was negotiating to form a joint venture with Rivian Automotive Inc., a startup electric-truck maker based outside Detroit. When the deal fell apart, GM accelerated development of its own battery-powered pickup and SUV program.

It’s not alone in thinking there’s latent demand for large and luxury-market vehicles. When the GM deal died, Ford Motor Co. invested $500 million in Rivian, with plans to build an electric pickup. And Jaguar Land Rover Holdings., which has a strong presence in large and luxury SUVs, will sell a plug-in hybrid version of the Range Rover this summer. The Indian-owned, British brand also has joined forces with BMW AG to work on electric drive.

At its annual meeting on June 11, Tesla CEO Elon Musk said he is pushing hard to get an electric pickup truck that is capable of work duties but drives like a Porsche. He plans to show the vehicle this summer.

Should GM decide to move forward with Hummer, it would need to rebuild the brand’s marketing and retail strategy. The automaker could sell Hummers in Cadillac or Buick-GMC dealerships — for example in a small, brand-dedicated showroom. Previously GM gave specific franchises to separate Hummer dealers, who were disgruntled when sales ended. That alone could be a hurdle for greenlighting a resuscitated Hummer brand, one of the people said.

Whatever happens, GM won’t be the first to think of an electric Hummer. Schwarzenegger worked with Kriesel Electric to put a battery and EV motor in his own H1 two years ago — pioneering a zero-emission version of a vehicle that once went by the tagline “Like Nothing Else.”