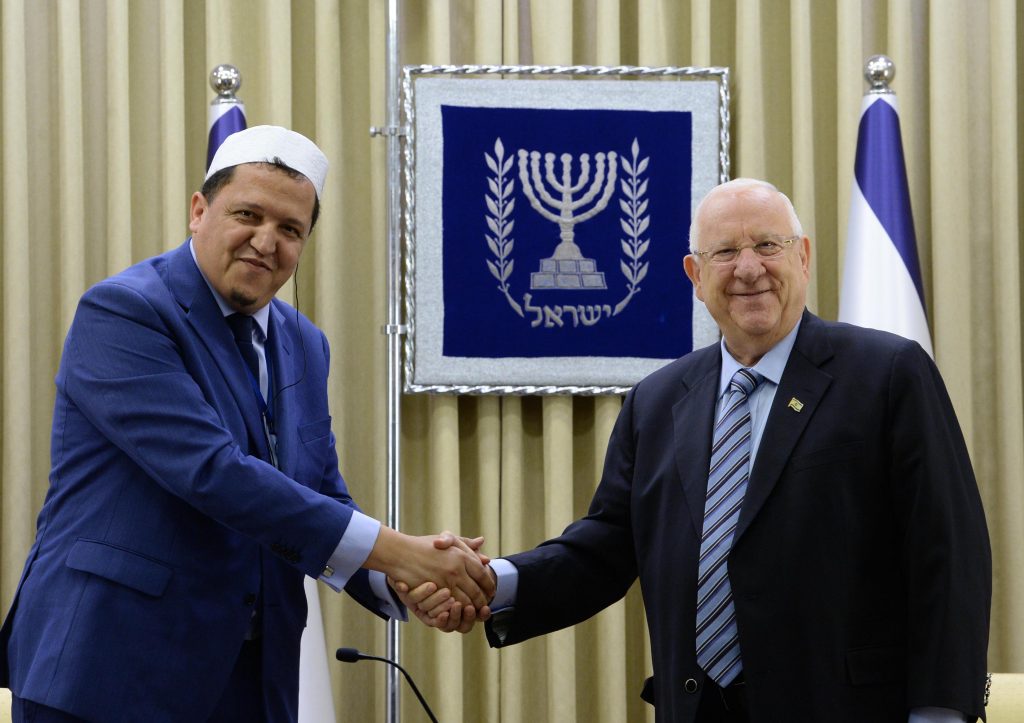 Israel’s President Reuven Rivlin on Sunday welcomed a delegation of the leadership of the Conférence des Imams de France (the Conference of Imams in France) and of social activists from the Muslim communities in France and Belgium.

The delegation is visiting the country to learn about the communities in Israel and is headed by Imam Hassen Chalghoumi, whom the president met during his visit to Paris earlier this year and has long been an advocate of interfaith relations and tolerance, along with Imams, social activists, local councilors, heads of student groups and journalists.

President Rivlin talked about growing anti-Semitism around the world and the importance of interfaith work, saying, “We have to work together. We must fight anti-Semitism. Judaism has never been at war with Islam. Judaism and Islam are sister religions, and we should relate to each other in this way. The Jewish people suffered for many years from racism and hatred. Moderation – religious, nationalist and cultural – are the true way to reach the hearts of people. That is the right way to live.”

Imam Hassen Chalghoumi said in response: “I have visited Israel before, and every time I feel as if it is the first time. Not only because of the sacred city, but also because of the diverse, modern population that lives in freedom despite the threats and challenges. It is wonderful to see each time. Recently in Europe, people are being killed just because they are Jews. At Hyper-Cacher, at the museum in Brussels – innocent people were killed just because they are Jewish. This delegation represents the hope, the need and the possibility to build bridges of trust. You yourself represent that hope. Religion itself is not the problem, rather political Islam that tries to create conflict between Jews and Muslims. States such as Iran, Qatar and Turkey who fund hatred through Hamas and Hizbollah. This is not religion; this is political Islam which we must fight against.”

A young Belgian Muslim woman member of the delegation told the president that “Before I came here, I had a terrible image of Israel. I saw Israelis as terrorist murderers. It touched my heart to see how people here are so different [and] from different religions live together in peace, despite their difficult histories. This has been an adventure that has changed my perception of everything. I supported BDS and boycotting Israel, and I can tell you honestly that I have changed my mind. Israel has a right to exist. Human rights are respected here, and the people are generous and open-hearted. I did not know this because the picture portrayed in Europe is so totally different. I am happy to have come here and seen it with my own eyes.”