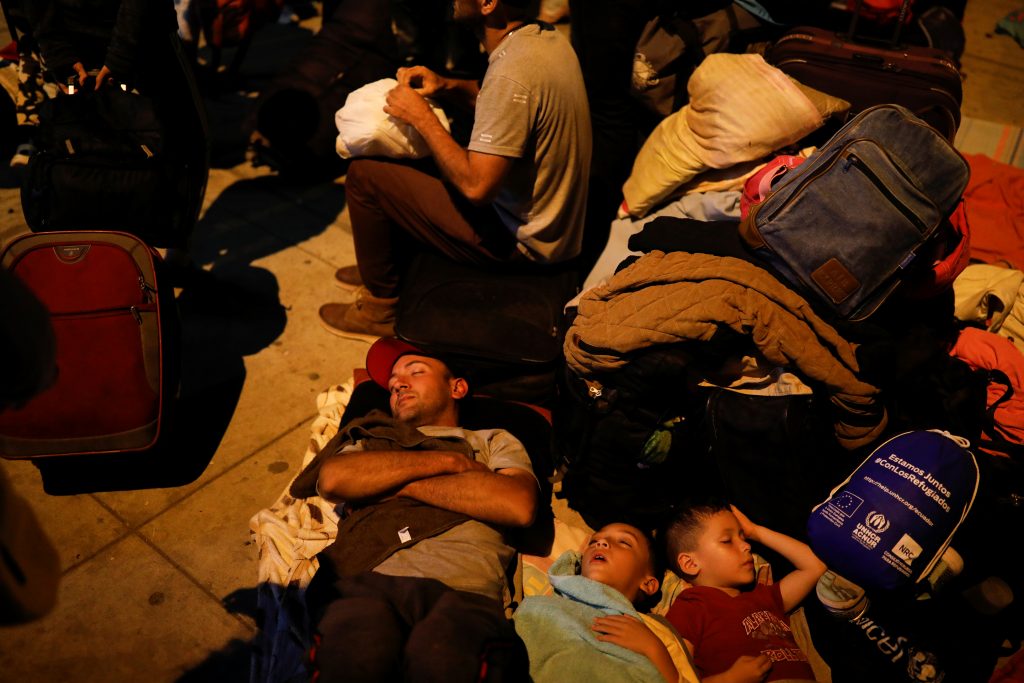 Thousands of Venezuelans crossed into Peru, despite a crackdown on migrants without passports or visas meant to stem the flood of immigration from their crisis-stricken nation, as many lacking those documents filed asylum requests instead.

Venezuela’s economic collapse under President Nicolás Maduro has unleashed the biggest migratory crisis in recent Latin American history, forcing countries like Peru – a developing nation of 32 million people – to grapple with an unprecedented surge in immigration.

Under the new rules imposed on Saturday, migrants must have passports and visas before coming to Peru – closing a door to many Venezuelans who cannot afford the fees needed to acquire them.

However, asylum seekers are not required to have passports under international law, providing poor Venezuelans with a way around the changes.

Desperate Venezuelans rushed to reach Peru before the crackdown took effect. A record 4,700 asylum claims were filed in Peru on Friday, part of more than 8,000 Venezuelans who entered the country that day, according to the U.N. refugee agency, UNHCR.

Thousands of Venezuelans waited in lines at the border checkpoint in Tumbes on Saturday, as immigration officials struggled to process a backlog of paperwork. Some of them had walked for weeks to reach Peru, U.N. officials said.

Families spread out their luggage on sidewalks and streets, with children playing and adults napping.

“This is my last resort. I hope they let me in,” Yaisy Segovia said, as she waited to fill out a form requesting asylum at tents set up by the U.N. refugee agency UNHCR. Inside the tents, U.N. assistants helped Venezuelans answer questions on the forms.

Segovia, 32, said she left her three children with their grandparents in Venezuela to seek work in Peru.

After trekking and taking buses through Colombia and Ecuador, she made it to Tumbes, only to be robbed of her immigration documents and cash late on Friday, she said.

“I just want this trip to be over.”

The United Nations estimates that 4 million Venezuelan refugees and migrants have fled from widespread shortages of basic foods and medicines as well as political violence in their homeland.

The crisis has deepened since the United States imposed tough sanctions on the OPEC nation’s oil industry in January in an effort to oust leftist president Maduro in favor of opposition leader Juan Guaido.

Peru is home to some 800,000 Venezuelan migrants, the government says – the second-largest population outside Colombia, which houses more than 1.2 million.

Just two years ago, Peru had introduced new migratory laws to accommodate Venezuelans. It doled out hundreds of thousands of special residency cards so they could work legally, go to school and access public health care.

But the tide has since turned, amid growing fears fanned by media reports and politicians that Venezuelan migrants are driving down wages and fueling crime.

Regina de la Portilla, a UNHCR spokeswoman in Peru, said she was unaware of any Venezuelans seeking asylum who were barred from entering Peru.

She said that most Venezuelans leaving their homeland in mass should be considered refugees, given the acute humanitarian crisis.

But Peru applies a narrower definition of refugee. Peru President Martín Vizcarra’s government has said that 99% of Venezuelans who request asylum in Peru do not qualify for it, raising the prospect of nearly 280,000 Venezuelans eventually losing legal protections provided to them under the refugee system.

The UNHCR said that the latest waves of migrants were the neediest yet. Too poor to acquire passports, many were women with children who were rushing to join their partners in cities across South America before it was too late.

“People are arriving in a more and more vulnerable situation,” said Federico Agusti, UNHCR’s representative in Peru, said in a statement. “Some have been walking for 30 or 40 days through various countries in the region. We see people suffering from malnutrition or dehydration.”

Josverrelly Pena, a 29-year-old expectant mother, said she and her husband arrived by bus just hours before the midnight deadline. Lacking a passport for her son, she said they decided to leave everything to join her mother in Peru.

“We had been thinking about it for more than a year,” Pena said as she washed her hands over a sewage grate. “It was now or never.”