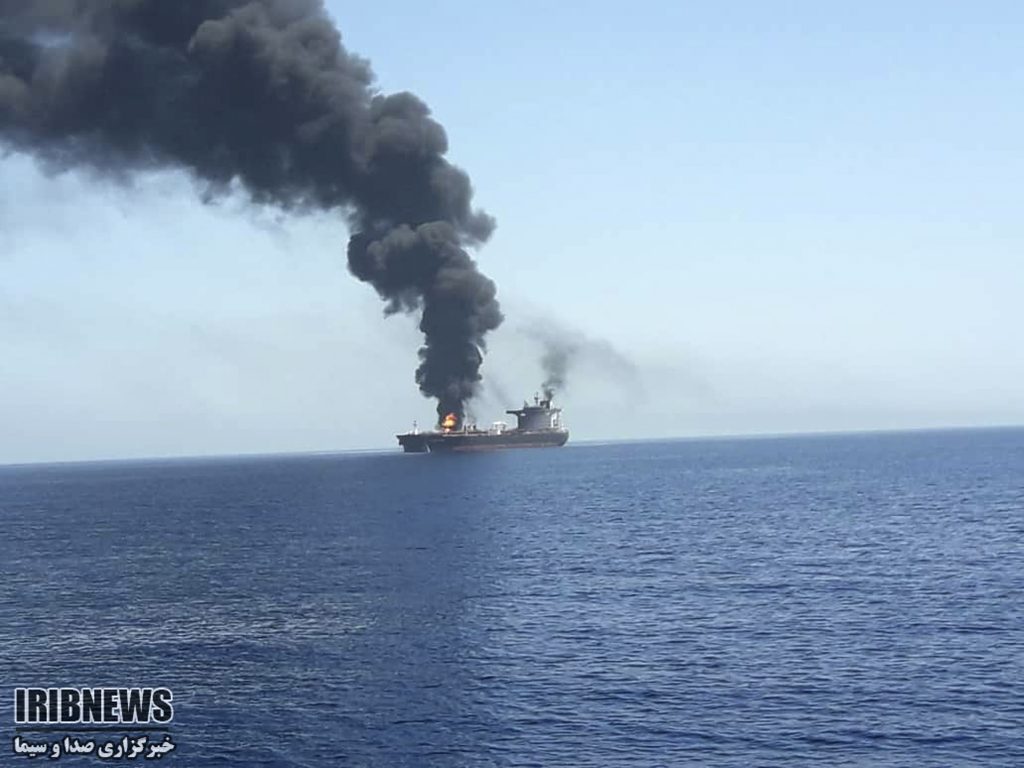 Two oil tankers near the strategic Strait of Hormuz were reportedly attacked on Thursday, an assault that left one ablaze and adrift as sailors were evacuated from both vessels and the U.S. Navy rushed to assist amid heightened tensions between Washington and Tehran.

In Iran, Supreme Leader Ayatollah Ali Khamenei warned that while Tehran doesn’t seek nuclear weapons, “America could not do anything” to stop Iran if it did.

The comments came during a one-on-one meeting capping Japanese Prime Minister Shinzo Abe’s high-stakes visit in Tehran that sought to ease Iran-U.S. tensions, and suggested the efforts had failed.

Benchmark Brent crude spiked at one point by as much 4% in trading following the reported attack, to over $62 a barrel, highlighting how crucial the area remains to global energy supplies. A third of all oil traded by sea passes through the strait, which is the narrow mouth of the Persian Gulf.

The latest incident in the region comes after the U.S. alleged that Iran used mines to attack four oil tankers off the nearby Emirati port of Fujairah last month. Iran has denied being involved, but it comes as Iranian-backed rebels in Yemen also have launched missile and drone attacks on Saudi Arabia.

Cmdr. Joshua Frey, a 5th Fleet spokesman, said the U.S. Navy was assisting the two vessels that he described as being hit in a “reported attack.” He did not say how the ships were attacked or who was suspected of being behind the assault.

Dryad Global, a maritime intelligence firm, in a preliminary report identified one of the vessels involved as the MT Front Altair, a Marshall Islands-flagged crude oil tanker. The vessel was “on fire and adrift,” Dryad added. It did not offer a cause for the incident or mention the second ship.

The firm that operates the Front Altair told The Associated Press that an explosion was the cause of the fire on board. International Tanker Management declined to comment further saying they are still investigating what caused the explosion. Its crew of 23 is safe after being evacuated by the nearby Hyundai Dubai vessel, it said.

The second vessel was identified as the Kokuka Courageous. BSM Ship Management said it sustained hull damage and 21 sailors had been evacuated, with one suffering minor injuries. Iranian state television said 44 sailors from the two tankers have been transferred to an Iranian port in the southern province of Hormozgan.

The timing of Thursday’s reported attack was especially sensitive as Abe’s high-stakes diplomacy mission was under way in Iran. Japan’s Trade Ministry said the two vessels had “Japan-related cargo.”

On Wednesday, after talks with Iranian President Hassan Rouhani, Abe warned that any “accidental conflict” that could be sparked amid the heightened U.S.-Iran tensions must be avoided.

A statement published by Khamenei’s website after Abe’s meeting Thursday with the supreme leader suggested a tense exchange between the two.

“We have no doubt about your good will and seriousness, but … I don’t regard Trump as deserving any exchange of messages,” Khamenei reportedly told Abe.

“You should know that if we planned to produce nuclear weapons, America could not do anything,” said Khamenei, who has final say on all matters of state in Iran’s Shiite theocracy.

Tensions have escalated in the Mideast as Iran appears poised to break the 2015 nuclear deal with world powers, an accord that the Trump administration pulled out of last year.

Iran’s nuclear deal, reached in 2015 by China, Russia, France, Germany, the United Kingdom and the U.S., saw Tehran agree to limit its enrichment of uranium in exchange for the lifting of crippling sanctions. Western powers feared Iran’s atomic program could allow it to build nuclear weapons, although Iran long has insisted its program was for peaceful purposes.

In withdrawing from the deal last year, Trump pointed to the accord not limiting Iran’s ballistic missile program and not addressing what American officials describe as Tehran’s malign influence across the wider Middle East. Those who struck the deal at the time described it as a building block toward further negotiations with Iran, whose Islamic government has had a tense relationship with America since the 1979 takeover of the U.S. Embassy in Tehran and subsequent hostage crisis.

Iran says it already quadrupled its production of low-enriched uranium. Meanwhile U.S. sanctions have cut off opportunities for Iran to trade its excess uranium and heavy water abroad, putting Tehran on course to violate terms of the nuclear deal regardless.